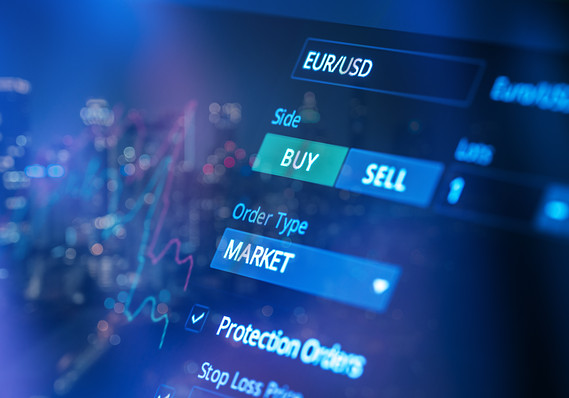 Have we just experienced the decade of the ETF?

In 2010, about $1 trillion was invested in exchange-traded funds. As the decade draws to a close, ETFs have more than four times that amount, according to the Investment Company Institute. But what comes next may dwarf the explosion of interest these products experienced over the past 10 years.

By mid-decade, according to one pundit, there will be more money invested in ETFs than mutual funds. Your 401(k) plan may – or may not – offer ETFs. And for all the talk about “active versus passive,” the coming decade may make that debate moot, as more individual investors start to design their own products, rather than relying on professional money managers.

Dave Nadig, managing director of ETF.com and a veteran in the field, has been making the same stump speech since 2009. At some point in the future, he tells an industry gathering every year, ETF assets will surpass those of mutual funds. Nadig first made that prediction in 2009, telling his audience the “cross-over” date would be 2025. “They’re still laughing at me,” he told MarketWatch, even as his date has moved up one year, to 2024. 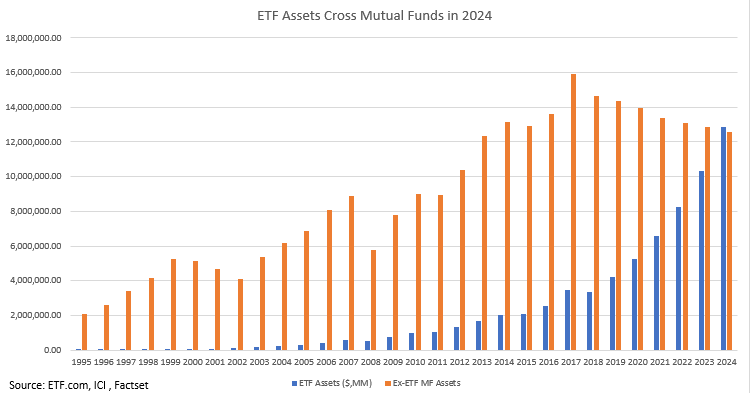 Nadig’s thesis: “Over the next 10 years there’s no reason to think we’ll see anything other than what we’ve seen over the last 10.”

And the last 10 have been dominated by a knee-jerk reaction on the part of seemingly the entire investing industry. It just hasn’t been worth it to pay more to active fund managers to do lots of buying and selling of portfolio holdings, especially when years of research shows that those managers get lower returns than funds that simply follow an index.

But the allure of ETFs isn’t only about rock-bottom fees. ETFs are more tax-advantaged than mutual funds, and the range of product offerings also appeals to investors who want “flexibility,” rather than just following the well-worn strategies of past generations, said Denise Krisko, president and co-founder of Vident Investment Advisory.

ETFs like the ETFMG Alternative Harvest fund MJ, -3.33% allow investors to buy into the nascent marijuana industry, while others embrace companies that have pledged to take a “conscious” approach to capitalism, for example.

Nadig’s forecast of a 2024 “cross-over” date for ETF assets to top those of mutual funds has an important caveat. Right now, nearly all flows going into mutual funds are funding retirement plans. If ETFs were to replace, or coexist with, mutual funds in retirement offerings, that target date could arrive even earlier.

In an interview with MarketWatch, Nadig called 401(k)s “this giant pot of gold that the industry hasn’t been able to crack.” But the stars may be aligned for that to change. Big brokerages like Charles Schwab SCHW, -2.95% have started to allow for the purchase of fractional shares of ETFs, allowing small-dollar, regular purchases of those funds in the same way mutual funds now pick up flows from every paycheck.

See: SPY versus SPY? The world’s biggest ETF clones itself

And with greater public awareness of the advantages of ETFs over mutual funds, ETF adoption into retirement accounts may be “inevitable” over the next 10 years, Nadig said. But he calls retirement plans “a bit of a third rail,” not something human resources managers want to be seen as taking risks with.

Indeed, big fund managers who spoke to MarketWatch emphasized that the current arrangement was working too well for anyone to tinker with it. Large employers have great “buying power” coming from pooling their assets and incoming flows from employees, said Rich Powers, Vanguard’s head of ETF product management.

Many experts think the ease of trading that ETFs offer may be a bad fit for retirement plans, which benefit when employees hold them for longer periods.

“Plan sponsors are fiduciaries and many plan participants are not engaged in investing,” Powers said. “Ideas like auto-enrolling people and putting them in target-date funds takes advantage of inertia. Offering a tradable ETF goes in the opposite direction of what many plan sponsors have encouraged people to move toward.”

Chris Herman, head of workplace investment strategies for Fidelity, agreed. “ETFs are great products, but not within defined contribution plans,” he said. “The benefit of liquidity and intraday trading is not what sponsors want to enable, and not what participants want.” A Fidelity analysis shows that fewer than 10% of retirement-plan participants have made any changes to their positions over the past year, Herman said. And the tax efficiency of ETFs is hardly a draw inside retirement plans that are already tax-advantaged, Herman noted.

“I’m not sure how I feel about it,” Krisko said. “Everything is slowly evolving from mutual funds to ETFs, though 10-20 years from now there could be some other vehicle.” Any workplace retirement plan adoption will likely be led by smaller firms that don’t enjoy the same economies of scale of the biggest employers, Krisko suggested.

A “market of one”

What could Krisko’s “other vehicle” look like? If she and other industry analysts are right, some of the most profound changes for ETFs may be the continuing evolution away from off-the-rack products and toward a truly custom-made investing experience.

Personalized funds can take a few forms. Investment advisers are becoming accustomed to something often called “direct indexing:” letting clients construct a portfolio that starts with a base of an existing index, less one or two securities that may be inappropriate for those investors, or adding a few others that may be more in demand.

Packaged software that is available to advisers or services sold directly to end-investors helps construct those tailored portfolios in nearly the same way professional fund managers do. It also enables individualized rejiggering of those portfolios at the end of the year for tax-loss harvesting, for example.

See: What is a ‘non-transparent’ ETF, and why would anyone want to own one?

Patrick Shaddow is with S-Network Global Indexes, a New York-based developer of indexes for professionally managed funds like the Procure Space ETF UFO, -0.63%  profiled by MarketWatch in July.

Shaddow still thinks customization “is what will drive future investment opportunities.” Investors may want to exclude from their holdings shares of the company for which they work, he noted, or may have deeply personal ideas of what constitutes socially responsible investing.

The S&P 500 SPX, -1.57% “is going to be a dominant force for a long time,” Krisko said. But investors will continue to adopt their own approaches, she said, “and honestly many of them would be improvements on some of the more standard indices.”

Related: Do well by doing good with this fund that supports freedom and human rights