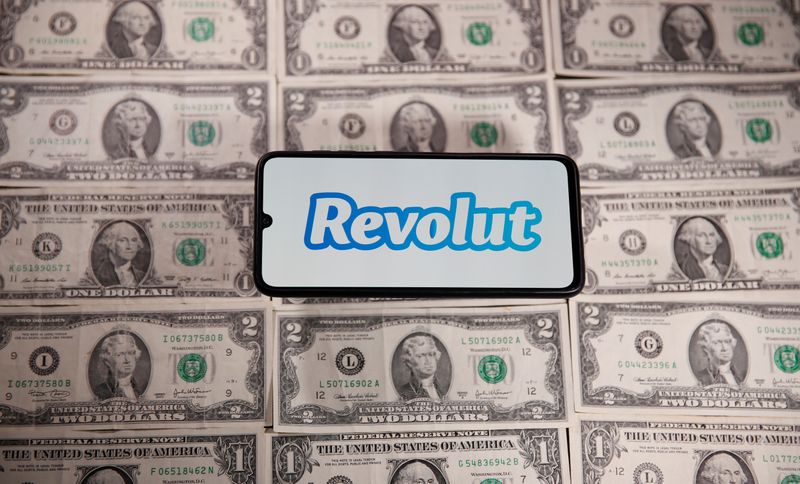 © Reuters. Smartphone with Revolut logo is placed on the U.S. dollar banknotes in this illustration 2/2

NEW YORK (Reuters) – When London-based Revolut opens its virtual doors in America this year, it will be the latest European digital bank to challenge incumbent U.S. lending giants after forays by Monzo and N26, but the challenges it faces have not diminished.

While the start-ups are experiencing fast growth at home, a crowded market, complex regulatory environment and different customer needs make it hard to stand out in the United States, financial-technology executives, investors and analysts say.

Revolut and its rivals have amassed millions of customers and billion-dollar valuations in Europe by offering cheap, user-friendly alternatives to traditional banking services. Branchless, but armed with slick apps, they’re particularly popular with younger customers.

In theory, there should be rich pickings in the U.S. where banks often have minimum deposit requirements and hefty overdraft fees, and where there are fewer free ATMs.

But customers of the country’s roughly 4,500 FDIC-insured commercial banks are far more dependent on credit than in Europe, with a fondness for racking up credit card loyalty points and individual store cards.

“(The newcomers’) product offering and key features might not be as relevant in the U.S. market,” said Yann Ranchere, a partner at venture capital firm Anthemis Group. “Credit cards play a stronger role and FX is of less importance.”

Revolut’s flagship offer is a debit card connected to an app. Users can store and spend different currencies at the interbank exchange rate, with low fees. The company plans to offer the same service in the U.S., targeting business travelers, exchange students and unbanked consumers, according to a company executive.

London-based Monzo launched a limited roll-out of its app-based U.S. checking account in June. There is no minimum balance requirement and no monthly or foreign transaction fees, but deposits don’t earn interest.

At the time, Monzo chief executive Tom Blomfield said the company wanted engaged early users to provide feedback to help tailor the product to its new market. It now has 20,000 customers on its waiting list.

Berlin-based N26 arrived in July, touting cashback rewards and other perks. Its app, which allows customers to store and move money around sub-accounts called “spaces”, had 250,000 U.S. customers by late January.

For a interactive version of this graphic on the fintechs’ valuations, customers and downloads click here https://tmsnrt.rs/2OqM5TT.

Whereas challenger banks in the UK are eroding market share of traditional lenders, in the U.S. fintech is mostly snaring business from smaller lenders and credit unions which have less resources to invest in digital, leaving analysts skeptical about whether they will be able to achieve viable scale.

“There is nothing that the startups are coming to market with that is new or different,” said Ron Shevlin, who heads fintech research at Cornerstone Advisors.

“There is not a lot of precedent (of successful global expansion) in the core fintech scene,” Kopp said. “But academically, I don’t see a reason why we shouldn’t be able to do it.”

Just 3% of U.S. millennials — those born between the early 1980s and mid 1990s and a fintech target group — surveyed by Cornerstone held their main checking account a digital only challenger.

“U.S. consumers continue to face the issue of legacy banking systems, a lack of transparency and excessive fees. These are real problems which we can solve, a Revolut spokeswoman said. “There is plenty of room for both incumbent banks and technology companies to transform the U.S. financial landscape.”

New entrants account for just 3.5% of the $1.04 trillion in annual U.S. banking and payment revenues, compared with 14% of the 206 billion euros ($228 billion)(175 billion pounds) in the United Kingdom, according to research firm Accenture (NYSE:).

Perception is one obstacle facing the newcomers, but there are also practical ones. Whereas banks can use one license to operate across the European Union, startups in the United States face a fragmented regulatory environment with multiple regulators at state and federal levels.

Some partner with local banks for simplicity’s sake but that can present its own problems, said Sarah Kocianski, head of research at 11:FS, a London-based financial-technology consultancy.

“There is the potential for the neobank and the license holder to diverge when it comes to direction of the brand, product suite, third party providers, etcetera,” Kocianski said. “The license-holder could well be more cautious given it’s their license at stake.”

Stockholm-based Klarna needed almost three years to figure out the right product for U.S. customers, CEO Sebastian Siemiatkowski told Reuters. After a slow start, the company is now on track to add 6 million U.S. customers annually via its shopping app, having added retail partners and advertised on social media, he said. “There are a lot of things that can be replicated, but there are local things you need to take into consideration,” Siemiatkowski said.

London-based money-transfer startup TransferWise came to the United States in 2015. The country now accounts for 25% of its worldwide revenue, but the overseas expansion was harder than expected, said Chief Technology Officer Harsh Sinha.

“In a way you are starting fresh,” he said “You underestimate a lot of things.”