Home
Market
Asia on ropes as S&P500 slides, dollar in demand
Prev Article Next Article
This post was originally published on this sitehttps://i-invdn-com.akamaized.net/trkd-images/LYNXMPEG2M00M_L.jpg 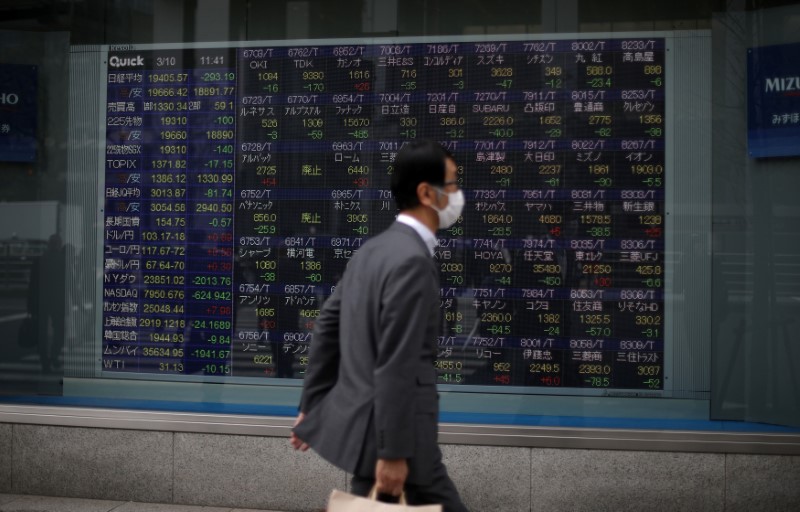 © Reuters. A man wearing protective face mask walks in front of a stock quotation board outside a brokerage in Tokyo

SYDNEY (Reuters) – Asian shares slid on Monday as more countries all but shut down in the fight against the coronavirus, threatening to overwhelm policymakers’ frantic efforts to cushion what is clear to be a deep global recession.

added 0.8%, perhaps aided by expectations of more asset buying by the Bank of Japan, but the commodity-heavy Australian market shed 5%.

Oil was not far behind as mass bans on travel worldwide crushed demand for fuel.

Analysts fear the collapse in oil and other commodity prices will set off a deflationary wave making it harder for monetary policy easing to gain traction as economies shut down.

Nearly one in three Americans were ordered to stay home on Sunday to slow the spread of the disease, while Italy banned internal travel as deaths there reached 5,476.

U.S. stocks have already fallen more than 30% from their mid-February and even the safest areas of the bond market experiencing liquidity stress as distressed funds are forced to sell good assets to cover positions gone bad.

WAITING ON THE DISEASE

“It would be a brave, or foolish, man to call the bottom in equities without a dramatic medical breakthrough,” said Alan Ruskin, head of G10 FX strategy at Deutsche Bank (DE:).

Also needed would be evidence that China could re-emerge from the virus without reigniting infections, and that other major economies had hit inflection points for infection rates, he added.

“Even were social distancing to subside at the earliest plausible dates in Europe and the U.S., it will have done extraordinary damage to confidence in a host of key sectors,” Ruskin said.

The mounting economic toll led to a major rally in sovereign bonds late last week, with efforts by central banks to restore liquidity in the market allowing for more two-way trade.

In New Zealand, the central bank announced its first outright purchase of government paper aiming to inject much-needed liquidity into the local market.

In currency markets, the first instinct on Monday was to dump those leveraged to global growth and commodity prices, sending the Australian dollar down 0.8% to $0.5749.

The U.S. dollar started firm but took a step back after partisan battles in the U.S. Senate stopped a coronavirus response bill from advancing.

Against a basket of currencies the dollar was still a fraction firmer at 102.510.

The dollar was a major gainer last week as investors fled to the liquidity of the world’s reserve currency, while some funds, companies and countries sought more cash to cover their dollar borrowings.

“The ‘dash for cash’ will remain a key driver of currency markets this week,” said Kim Mundy, a currency strategist at CBA.

“We expect strong USD demand to continue to cause liquidity problems and keep volatility elevated. Direct intervention by central banks in currency markets to reduce market dysfunction is possible.”