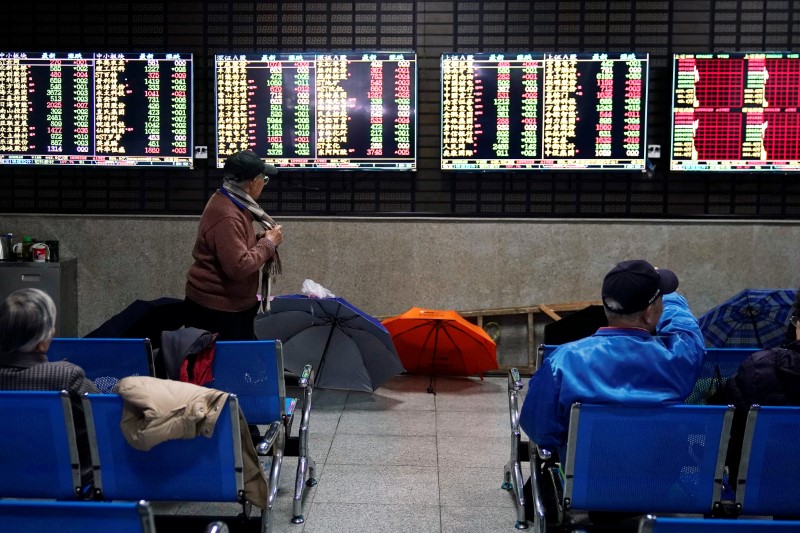 SYDNEY (Reuters) – Asian shares neared a 20-month top on Monday as Wall Street extended its run of record peaks on solid U.S. economic data and lashes of liquidity from the Federal Reserve.

Oil prices jumped as oilfields in southwest Libya began shutting down after forces loyal to Khalifa Haftar closed a pipeline, potentially reducing national output to a fraction of its normal level.

MSCI’s broadest index of Asia-Pacific shares outside Japan firmed 0.1%, after notching its highest close since June 2018. Japan’s added 0.2% to be near its highest in 15 months.

Chinese shares opened firm with the blue-chip CSI300 index up 0.2%.

Australia’s main index scored another all-time peak and South Korea was near its best level since October 2018. E-Mini futures for the edged up 0.1%.

Sentiment was supported by the relentless run of record highs on Wall Street. Only three weeks into the new year, the S&P 500 has gained just over 3% and the NASDAQ almost 5%.

Ray Attrill, head of foreign exchange strategy at National Australia Bank, suspects the strength on Wall Street owes much to the Federal Reserve’s decision in September to rein in rising repo rates by flooding markets with cash.

“The relationship between the size of the Fed’s balance sheet, now some 11% bigger than where it was in late September, and the performance of U.S. risk assets is uncanny,” he said, noting the balance sheet had just hit a three-month top of $4.18 trillion.

Analysts at BofA Global Research noted global stock market capitalization had ballooned by $13 trillion since its September lows and the S&P was only 5% away from marking the biggest bull run in history.

“We stay irrationally bullish until peak positioning and peak liquidity incite a spike in bond yields and a 4-8% equity correction,” they said in a note.

The Fed’s buying binge on Treasury bills has kept bonds bid even as stocks surged and economic data stayed healthy. Yields on two-year notes are dead in line with the overnight cash rate at 1.56%, compared to 2.62% this time last year.

The string of mostly solid U.S. data has underpinned the dollar, particularly against the safe-harbor yen. The dollar stood at 110.19 yen on Monday, having hit an eight-month peak of 110.28 last week.

The euro was stuck at $1.1095, while sterling idled at $1.3000 after poor British economic news fanned speculation about a cut in interest rates.

Concerns about a cut in supply from Libya sent oil prices higher. [O/R]