Home
Market
Asian shares set for rough ride on virus fears, eyes on China
Prev Article Next Article
This post was originally published on this sitehttps://i-invdn-com.akamaized.net/trkd-images/LYNXMPEG110QR_L.jpg 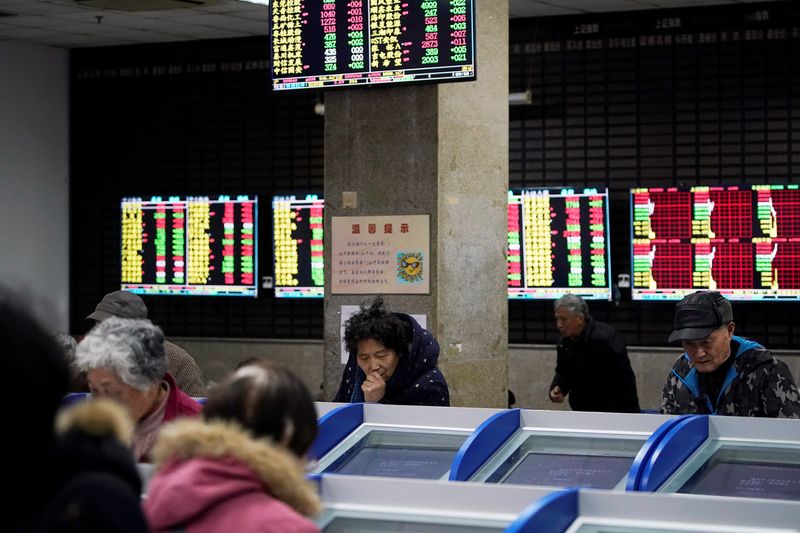 SYDNEY (Reuters) – Asian markets are set for another bumpy ride on Monday on fears about the hit to world growth from the rapidly spreading coronavirus, with all eyes on China where trading resumes following the Lunar New Year break.

A total of 361 people have died in China from the new virus with the first death out of the mainland reported on Sunday in the Philippines.

Looking to head off any panic, China’s central bank plans to inject 1.2 trillion yuan ($173.8 billion) of liquidity into the markets via reverse repo operations on Monday.

Despite the measures, MSCI’s broadest index of Asia-Pacific shares outside Japan was 0.5% lower, on track for an eighth straight day of losses.

“These initial interventions aim to boost confidence, but they are unlikely to be sufficient to curtail a sharp downturn in Q1,” Citi economists said in a note.

“As most employees won’t return to work until Feb. 9, the output losses are likely to be larger than expected, and incoming economic activity data will continue to prompt the authorities to take more actions in order to reduce the adverse impact of the Wuhan coronavirus on the economy.”

Chris Weston, a Sydney-based strategist at broker Pepperston, said “the big unknown” was how China’s financial markets respond to the show of force from the country’s central bank.

“The fact the China Securities Regulatory Commission (CSRC) has detailed they see the impact of the coronavirus as ‘short-lived’ is designed to instil confidence,” Weston said. “Whether the market feeds off this optimism is another thing given the spread of the virus is still in its exponential stage.”

On Friday, the fell 2.1%, the declined 1.8% and the dropped 1.6% as economists tempered their outlook for the world’s second-largest economy.

In a sign of a pause in the selloff elsewhere, E-Mini futures for the S&P500 added 0.2% on Monday.

Analysts expect travel curbs and supply chain disruptions to crimp Chinese growth, with a potential domino effect on other economies.

JPMorgan (NYSE:) shaved its forecast for global growth by 0.3 percentage points for this quarter.

Data out of the United States and Europe on Friday also pointed to economic weakness, while a mixed batch of corporate earnings added to the gloom.

In currencies, the safe-haven Japanese yen held near a 3-1/2 week high against the dollar at 108.41 after adding about 1.5% in the last two weeks.

The , which measures the greenback against a basket of major currencies, was a shade higher at 97.439.

Gold, which posted its best month in five in January, eased to $1,588.72, while yields on U.S. debt lingered near five-month lows as the United States, Japan and other countries tightened travel curbs to China.