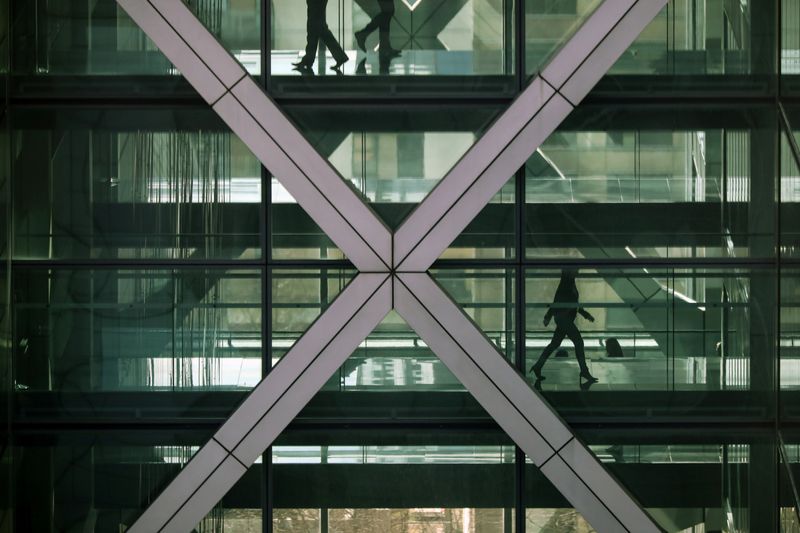 By Lawrence White and Iain Withers

LONDON (Reuters) – More than 50 staff at Societe Generale’s (PA:) London office were working from home on Friday as a precautionary measure against the spread of coronavirus, a source familiar with the matter told Reuters.

The French lender joined other banks sending staff home, splitting up trading teams and activating backup offices in a bid to contain the spread of the virus in Europe’s biggest financial hub.

The mood among financial firms echoed that of British authorities, after Chief Medical Officer Chris Whitty said on Thursday that the country was moving from the “containment” to the “delay” phase of a four-stage plan to combat the epidemic.

Britain so far has 163 confirmed cases of the virus, which has spread to more than 100,000 people worldwide and killed more than 3,000.

Societe Generale declined to comment on how many staff were working away from its office in Canary Wharf but said it has put in place measures including travel restrictions, rotation of staff, and working from home arrangements.

Commodity broker Marex Spectron also said late on Thursday that one of its London employees had tested positive for coronavirus.

It said the individual concerned had attended a Marex Spectron-sponsored event during IP week, a major petroleum industry gathering, on Feb. 25 in London.

Citigroup (N:) has sent 10% of traders who usually work in its Canary Wharf office to a backup site in Lewisham, a source familiar with the move said.

Banks including HSBC (L:) and Standard Chartered (L:) have also convened committees of senior executives to give daily briefings on the crisis.

Allied Irish Banks (I:) has canceled a planned post-results roadshow to London as a result of a ban on non-essential travel and has conducted a deep clean of all branches, Chief Executive Colin Hunt said in a radio interview.

“Earlier this week we introduced a ban on all non-essential travel across the group, that’s one of the reasons why I’m talking to you this morning from Dublin and not London,” he said.

The mood among financial firms was more practical than panicked, despite the growing number of confirmed cases.

“Had a few hedge funds that went into full shutdown on Monday because of coronavirus but then realized they were over-reacting and went back into the office later in the week,” said one hedge fund recruiter.

Staff in coffee shops in the Canary Wharf financial district said business is down, but that they hoped for only a short-lived disruption to normal customer traffic.

“We expect it to be quieter for the next few days,” a worker named Tahar in a Starbucks (NASDAQ:) in Canary Wharf said.

An employee in a branch of the Notes coffee chain in the financial area said business was down compared with the usually busy Friday rush.

“People just want to be safe I guess, we are hoping things pick up soon,” she said.