Home
Market
Barren streets but bustling stock markets in virus-stricken China
Prev Article Next Article
This post was originally published on this sitehttps://i-invdn-com.akamaized.net/trkd-images/LYNXMPEG1A0K0_L.jpg 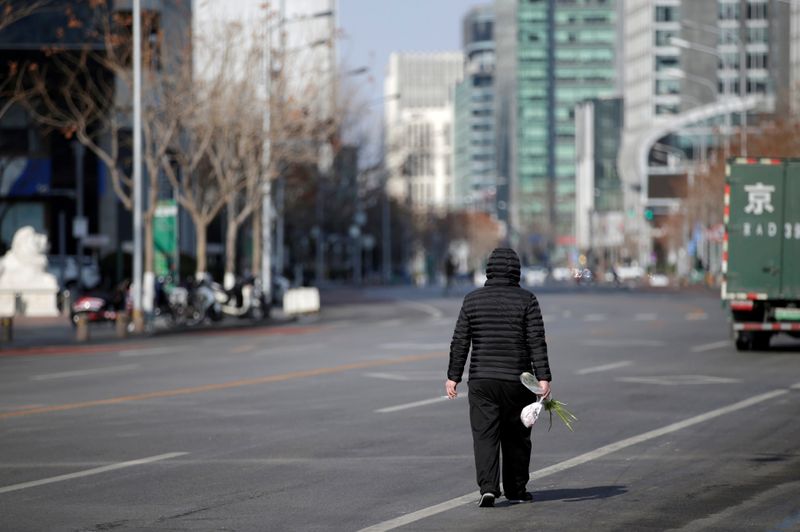 By Samuel Shen and Andrew Galbraith

SHANGHAI (Reuters) – Shops, restaurants and cinemas may be deserted in many parts of virus-plagued China, but online trading forums, internet roadshows and analyst calls are teeming with investors who have driven up stock trading volumes to nine-month highs.

Strategists are busy meeting anxious investors online to dispense tips on how to trade the coronavirus, while fund managers aggressively pitch products via live video streaming, with face-to-face conferences banned and many offices still closed.

The virus has been a blow to China’s already-slowing economy, prompting Beijing to boost financial support to avoid a deeper hit to economic growth. But with many cities still locked down and people staying home amid efforts to contain an epidemic that has killed more than 1,000, online activity is buzzing.

“The government is injecting liquidity to aid the virus-hit economy,” said Shanghai-based hedge fund manager Li Zhen, who has been trading at home since the outbreak began around the start of the Lunar New Year in late January.

Investor enthusiasm is highlighting a long-standing disconnect between China’s stock market and its real economy.

While analysts and government researchers forecast a sharp hit to the country’s GDP growth this year, Chinese equities have risen for six consecutive sessions as investors piled in to hunt for bargains following the market’s () 8% plummet on Feb. 3, the first trading session after the new year.

The start-up board ChiNext () has recovered all its losses, hitting a more than three-year-high on Monday, while the Shanghai market last week witnessed its biggest weekly trading volume since April, 2019.

“Investors who missed last year’s bull run are taking advantage of the correction to get onto the ride,” said Huang Wei, a former Wall Street trader who has recently set up a trading forum on China’s WeChat messaging platform that offers paid stock recommendation services to retail investors.

Membership in Huang’s newly established trading forum has grown to more than 100 in just a few days as investors are lured into a market that saw the blue-chip CSI300 index () jump 36% last year.

Robin Lu, an entrepreneur, said making money through stock investing is more promising than doing business under the current environment.

“The real economy is struggling. But in the stock market, there’s a structural bull,” said Lu, who favors technology stocks. His consultancy business has been affected by the virus, which hit many of his clients.

Meanwhile, mutual fund managers are promoting products for investors who don’t want to pick stocks themselves. More than 30 new funds have been launched over the past week, with several snapped up by investors in just a few days.

The stock market will benefit from “relatively loose liquidity conditions that will improve risk appetite,” he said.