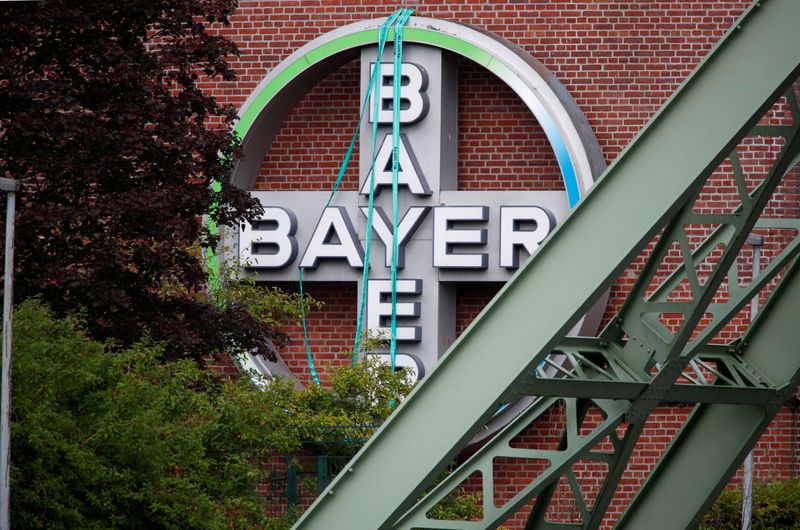 © Reuters. FILE PHOTO: Logo of Bayer AG at a plant of the German pharmaceutical and chemical maker in Wuppertal

(Reuters) – As Bayer AG (DE:) tries to settle U.S. lawsuits claiming that its weedkiller Roundup causes cancer, the company is considering a proposal that would bar plaintiffs’ lawyers involved in the litigation from advertising for new clients, according to a person familiar with the matter.

Bayer has said it is engaged in mediation to resolve the litigation, which has hit its share price since it acquired Roundup as part of its $63 billion takeover of Monsanto (NYSE:) in 2018.

The company has denied claims that Roundup or its active ingredient glyphosate causes cancer, saying decades of independent studies have shown the product is safe for human use.

The person said that Bayer believes an agreement with plaintiffs’ attorneys to ban advertising would limit the company’s future legal exposure since the “vast majority” of U.S. law firms that would bring such claims would be bound by the agreement.

German newspaper Handelsblatt reported on Thursday that Bayer was considering stopping retail sales of glyphosate while continuing to serve farmers, because the bulk of plaintiffs are private users. Bayer did not comment to Reuters on this report.

The company has ruled out putting a cancer warning on the weedkiller because market regulators such as the U.S. Environmental Protection Agency have deemed it save to use, but that means lawsuits could keeping piling in.

A provision such as the one the company is considering could result in “dramatically fewer claims” so that the litigation is no longer a “big drag on Bayer’s balance sheet,” said David Noll, a professor at Rutgers Law School and expert in mass torts, who is not involved in the litigation.

In January, court-appointed mediator Ken Feinberg put the number of Roundup cancer claimants at more than 75,000, which includes those that have not been filed. Bayer said the claims it has been served with in court were below 50,000.

While such a provision is unusual, there is precedent.

As part of a 2013 settlement between Merck & Co and plaintiffs claiming the company’s Fosamax osteoporosis drug caused jaw injury, lawyers pledged that they did not intend to “solicit claims” that arose after the settlement.

Perry Weitz of Weitz & Luxenberg, one of the leading plaintiffs’ firms involved in the Roundup litigation, criticized an idea to bar firms from advertising for future clients.

“A company cannot ask a lawyer to enter an agreement to restrict his practice in the future,” he said.

He said there had not been “serious discussions about future cases,” but declined to elaborate.

Michael Miller of The Miller Firm, another major party in the talks, said that “it is possible, if done correctly, to manage the exposure to future claims.” He declined to elaborate. Three other plaintiffs firms who have brought the bulk of the claims – Baum Hedlund Aristei & Goldman; Andrus Wagstaff PC; Holland Law Firm – declined to comment. Moore Law Group PLLC did not respond to requests for comment.

Bayer’s shares have lost about 20% of their value since August 2018 when a California jury in the first lawsuit over Roundup found Monsanto should have warned of the alleged cancer risks. Bayer has lost two more jury verdicts and is appealing all three rulings.