Home
Stocks
Best New Ideas in Health Care: Climate change is the biggest health threat this century — here’s how medical schools are adapting
Prev Article Next Article
This post was originally published on this site 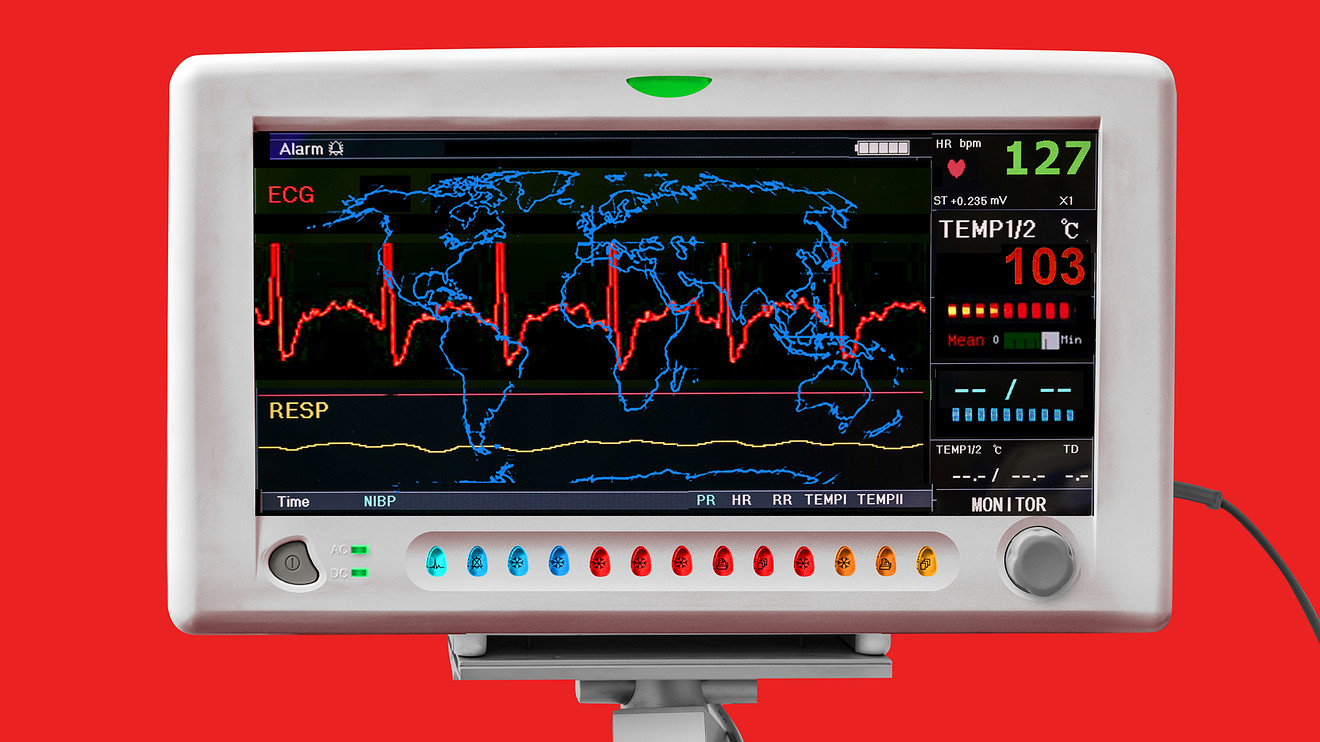 On the lakefront campus of the University of Wisconsin in Madison, which in 60 years could have average temperatures resembling those felt currently in Kansas City nearly 500 miles to its south, the next wave of aspiring doctors settles in for a “Climate Change and Medicine” elective filled to capacity.

Students at Wisconsin learn under Dr. Jonathan Patz, who had already been consulting for the United Nations on accelerating man-made climate change’s health impacts decades ago. The students examine, for instance, heat-related mortality, as well as the healthy “upside” of adapting to the effects of climate change. Reducing one’s reliance on cars and eating smarter benefits the human body and Mother Earth alike, Patz argues.

Wisconsin is just one of roughly two dozen medical schools leading — although only typically by offering a few courses — in the training of physicians, nurses, pharmacists and other practitioners who will take to the front lines of diagnosing and treating the impact of climate change. That impact is showing up increasingly in emergencies, such as wildfires, and in complicated-pregnancy statistics even in developed nations. More broadly, the spread of toxins, asthma cases, cardiovascular disease and Lyme disease is on the rise, all part of what The Lancet has deemed the biggest global health threat of the 21st century.

Yet the slow drip of new or amended medical-school programs that address climate change must be accelerated, some experts stress. Their efforts got an important boost after the American Medical Association in 2019 gave its backing to expanding climate-change training.

“Climate change is our reality. It is going to change the way we provide clinical care. For that reason, it needs to be taught in every medical school across the nation,” said Dr. Ashish Jha, the K.T. Li Professor of Global Health and Health Policy at Harvard’s T.H. Chan School of Public Health, writing in the Journal of the American Medical Association.

So far, climate-related scholarship has emerged in the last few years via elective courses and one-off lectures rather than treated as a portion of core curriculum, according to a study published in 2018 in the journal Academic Medicine. Those researchers found that a database was created but is lacking comprehensive reporting by schools of what climate-change lessons are taught. The lingering challenge: many schools believe they can’t devote significant attention to climate change in an already packed curriculum.

“With the ubiquitous presence of information technology…students and physicians now have ready access to all the medical knowledge ever created… [Many medical schools] still spend too much time teaching topics such as laboratory methods and having students memorize anatomic details that can be covered more quickly or not at all.”

The time burden may be eased via shared materials. Columbia University’s Mailman School of Public Health formed the Global Consortium on Climate and Health Education in 2017 to begin to share ideas on how to train health professionals. To date, it can count some 180 signatories of mostly public-health programs, but also over 20 medical schools and another two dozen nursing programs.

Even without dedicated coursework, existing classes should include more climate-change teaching, say proponents.

For instance, an asthma-diagnosing exercise with questions more closely tied to pollution exposure has now been in practice at the University of Illinois College of Medicine at Urbana-Champaign and is driving curriculum priorities at the University of California, San Francisco, near where deadly fires raged over the last couple of years.

Air pollution is responsible for about seven million deaths a year worldwide, according to the World Health Organization, which found that reducing the burning of fossil fuels could avoid 2.5 million premature deaths each year by 2050. Pollen and other aeroallergen levels are also higher in extreme heat. These factors can trigger asthma, which affects around 300 million people but can usually be treated.

Physicians also need better training in screening for vector-borne illnesses (infectious pathogens spread from one living organism to another; think ticks or mosquitoes) which are expected to increase with higher temperatures. Diagnosed cases of tick-spread Lyme disease, for instance, doubled between 2004 and 2016, according to the Centers for Disease Control and Prevention. Mosquitoes are cold-blooded vectors of disease, so any mosquito-borne disease will be affected by very small changes in temperature.

The benefits of the work under way at UC, San Francisco, part of a broader statewide system, is that new practices might be implemented throughout its several hospitals, clinics and classrooms, and much of the new training is geared toward layering on to existing course work. For instance, it’s important for medical students to understand the effects that hotter temperatures can have on the effectiveness and risks of pharmaceuticals, such as antipsychotics and diuretics, said UCSF’s Dr. Sheri Weiser, an epidemiologist and practicing internist at Zuckerberg San Francisco General Hospital, who also holds a master’s degree in public health.

Arianne Teherani, Ph.D., a professor of medicine and education at UCSF, says medical training in climate awareness isn’t just about diagnostics but fully understanding the role of medicine in creating and fixing the effects of climate change. If the U.S. health-care system were a country, it would rank 13th in the world for greenhouse gas emissions, the article in Academic Medicine cites. Professors of anesthesia, radiology and pharmacy, for example, are encouraged to teach that anesthetic gases, imaging technologies and pharmaceuticals all have a significant carbon footprint that may need to be offset, at the least, with green best-practices elsewhere, such as a shift to more energy efficiency in hospitals and offices. More work is needed, Teherani says, in cutting the industry’s footprint overall.

There’s also mental health to consider. Sobering climate-change statistics, no matter their projected year for realization, are already having an impact.

Dr. Karla Ivankovich, Ph.D., a licensed clinical professional counselor and professor of psychology at the University of Illinois at Springfield, said the mental-health profession has seen growing political anxiety from a widening trench of partisanship carry over into climate-change dread, and many therapists would welcome additional training.

Ivankovich said that she and other therapists are seeing patients who, among other concerns, find themselves troubled by the choice to have children more than past clients had, which Ivankovich linked in part to their fears for climate change and their response to the pickup in media coverage.

Not all who wear the white coat think that addressing climate change in the exam room is true to the profession’s intent.

“The zeitgeist of sociology and social work have become the driving force in medical education. The goal of today’s educators is to produce legions of primary care physicians who engage in what is termed ‘population health.’ This fits perfectly with the current administrator-rich, policy-heavy, form-over-function approach at every level of American education,” wrote Dr. Stanley Goldfarb, a former associate dean of curriculum at the University of Pennsylvania’s Perelman School of Medicine, in an opinion piece for The Wall Street Journal. “Meanwhile, oncologists, cardiologists, surgeons and other medical specialists are in short supply.”

Jha, writing in JAMA, would argue that view neglects both the climate warning signs and the way medicine should evolve.

“With the ubiquitous presence of information technology, including clinical decision support tools, students and physicians now have ready access to all the medical knowledge ever created… [Many medical schools] still spend too much time teaching topics such as laboratory methods and having students memorize anatomic details that can be covered more quickly or not at all,” he says

Howard routinely argues, including in this TEDx talk, that the trust medical professionals tend to cultivate with patients positions them to best teach about climate-change impacts; she cites survey statistics showing nurses routinely rank at the top of a list of professionals that people trust, with doctors in second place and politicians in dead last.

“We all have pull and we need to use it” to combat climate change, Howard regularly tells health professionals.

If Wisconsin’s Patz has his way, the future of climate curriculum will break slightly with med-school norms, equipping doctors and nurses to better engage with experts outside of the health-care setting. That includes urban planners, civil and environmental engineers, and of course, public-health officials.

Treatment and advocacy should never be separate pursuits, he argues.