Home
Market
Beyond Meat triples sales but shares fall after profit miss
Prev Article Next Article
This post was originally published on this sitehttps://i-invdn-com.akamaized.net/trkd-images/LYNXNPEG1Q1Y2_L.jpg 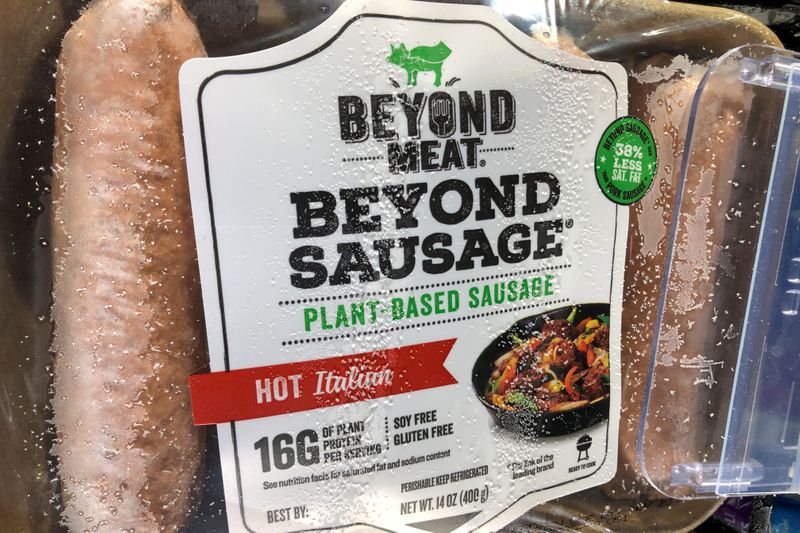 (Reuters) – Beyond Meat Inc (O:) said on Thursday that fourth-quarter sales tripled, but shares fell 7% in after-hours trading as the company missed earnings expectations and announced that Executive Chairman Seth Goldman will resign.

Goldman, a co-founder of beverage brand Honest Tea, will continue to serve as chairman, Beyond Meat said in a filing.

The El Segundo, California-based company said deals with retailers and restaurants substantially narrowed its loss and boosted sales. But Beyond Meat reported a 1 cent per share loss during the period, versus analyst expectations of a 1 cent profit, according to according to Refinitiv IBES data. Beyond Meat has never recorded a yearly profit due to spending on R&D, marketing and its fast-paced international expansion.

The company – whose Beyond Burgers and Sausages are driving a global craze for plant-based meat products – struck several high-profile deals last year with fast-food chains including McDonald’s Corp (N:) and Dunkin’ Brands Group Inc (O:). As consumers grow increasingly health-conscious and concerned about the environmental impact of industrial animal farming, the plant-based meat market is expected to expand to $140 billion.

The company’s share price has risen four-fold since its IPO in May, but short sellers and many investors view the stock as overvalued following its massive surge, now trading at 232.8 times expected earnings. This is well above the 19.1 earnings ratio of the broad S&P 500 index.

Beyond Meat’s products are sold by grocers including Walmart Inc (N:) and Amazon.com Inc’s (O:) Whole Foods. Its deals with restaurants include Starbucks Corp’s (N:) recent announcement that it will soon sell a Beyond Meat breakfast sandwich across Canada.

But while Beyond Meat and its main rival Impossible Foods race to sign on major global restaurant chains, there have been some signs of issues including Canadian restaurant chain Tim Hortons dropping Beyond Meat’s products from its menu, saying they were not “embraced” by customers during a trial. Last month, Burger King began cutting the price of its Impossible Burgers, adding them to its value menu.

Initial feedback on the Beyond Burger has been largely positive, based on checks with some Ontario-based McDonald’s currently testing the plant-based burgers in Canada, Bernstein analyst Alexia Howard wrote last month in a note. Howard said, however, that it seemed the McDonald’s trial had not yet been a blowout success that justified an immediate nationwide rollout across both Canada and the United States.

Beyond Meat was last year ranked the third-biggest meat alternative company by retail sales in the United States, according to Euromonitor, just behind traditional veggie-burger makers Morningstar, owned by Kellogg Co (N:), and Conagra Brands Inc’s (N:) Gardein. Both of those companies are this year entering the plant-based meat category, where they lag Beyond Meat.

Beyond Meat’s products are sold by grocers including Walmart Inc (N:) and Amazon.com Inc’s (O:) Whole Foods. Its deals with restaurants include Starbucks Corp’s (N:) recent announcement that it will soon sell a Beyond Meat breakfast sandwich across Canada.

“We have a kind of cannibalistic approach to innovation where we’re trying to take out our existing products and there’s a lot of pride in doing that,” Chief Executive Ethan Brown said in an interview on Thursday.

Boosted by rising sales the company’s full-year loss has narrowed since 2017, even as it spends on a new facility in the Netherlands and is working to start production in Asia by the end of this year. In recent months, the coronavirus outbreak has slowed manufacturing in China. Beyond Meat said its goal remains to produce in the region by end of year, pending abatement of the coronavirus.

“We’re looking, like everyone else, at when things are going to clear … but it’s not something we’re wringing our hands about it here,” Brown said.