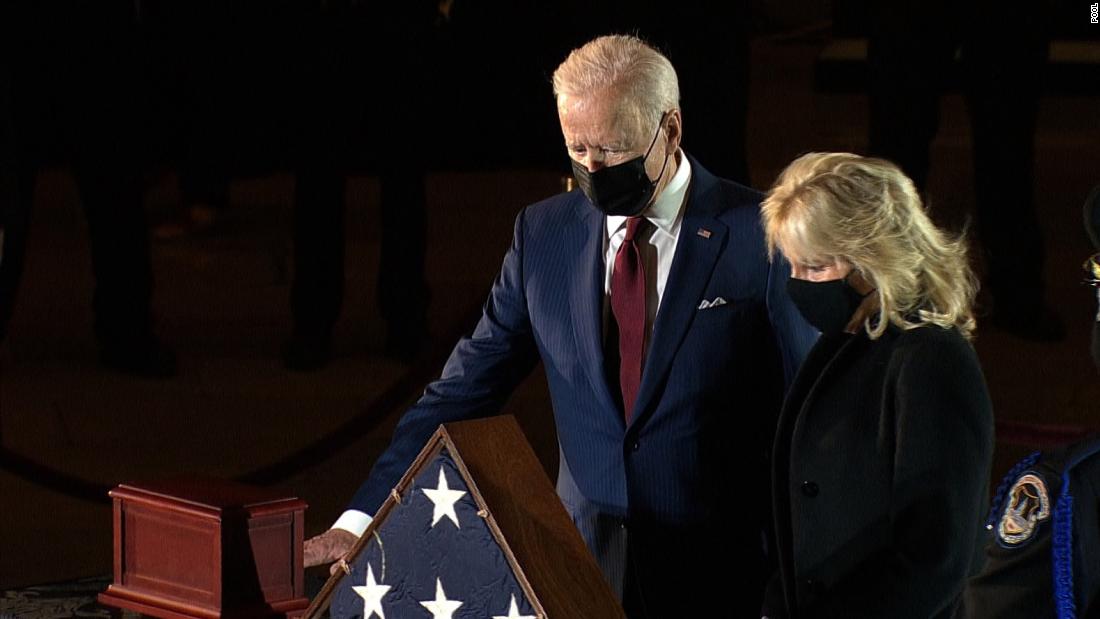 In an appearance lasting a few minutes, the President and first lady entered the Rotunda, where several US Capitol police officers were stationed including two officers flanking Sicknick’s remains.
Biden placed his hand on the table displaying Sicknick’s remains before he and the first lady each placed their hands over their hearts and Biden crossed himself. The Bidens then stood in front of memorial wreaths before again placing their hands over their hearts and exiting the Rotunda.
The somber ceremonial arrival began at 9:30 p.m. ET on Tuesday at the East Front of the Capitol with Sicknick’s remains arriving in a hearse. A Capitol Police officer carried the box containing his remains up the steps as police officers stood at attention outside the building that had been ransacked by insurrectionists almost a month before.
The viewing for Sicknick began at 10 p.m. and was set to last overnight. A ceremony is set to take place on Wednesday.
House Speaker Nancy Pelosi and Senate Majority Leader Chuck Schumer announced Friday that Sicknick would lie in honor under the historic dome.
Lying in state is typically reserved for leaders of American government, but two US Capitol Police officers shot to death in 1998 were the first private citizens to lie in honor at the Capitol.
Sicknick’s family released a statement on Saturday thanking “congressional leadership for bestowing this historic honor on our fallen American hero.”
“We also wish to express our appreciation to the millions of people who have offered their support and sympathies during this difficult time. Knowing our personal tragedy and loss is shared by our nation brings hope for healing,” the statement said.
Multiple lawmakers had called for Sicknick to be honored at the Capitol, and two Republicans from South Carolina had introduced a bill that would allow him to lie in the Rotunda before his burial at Arlington National Cemetery.
Sicknick, a New Jersey native who had served in the National Guard, died the day after the riot “due to injuries sustained while on-duty,” the Capitol Police said in a statement at the time. He was one of five people who died in the violence.
In the days following his death, Pelosi and New Jersey Gov. Phil Murphy also each arranged for flags to be flown at half-staff in Sicknick’s honor.
Sicknick’s ceremonial rest at the Capitol comes as investigators are struggling to build a federal murder case, vexed by a lack of evidence that could prove someone caused his death as he defended the Capitol during last month’s insurrection.
Authorities have reviewed video and photographs that show Sicknick engaging with rioters amid the siege but have yet to identify a moment in which he suffered his fatal injuries, law enforcement officials familiar with the matter said.
Soon after Sicknick died on January 7, prosecutors in Washington opened a federal murder investigation, dedicating a team inside the US attorney’s office to build out a case, authorities have said.
Sicknick isn’t the only Capitol Police officer who responded to and died following the riot. Acting Metropolitan Police Chief Robert J. Contee told the House Appropriations Committee last week that two police officers have died by suicide since responding to the riot at the Capitol on January 6, according to Contee’s opening statement before the committee, which was obtained by CNN.