Home
Market
Big Sanders win could add risk to markets already hit by coronavirus
Prev Article Next Article
This post was originally published on this sitehttps://i-invdn-com.akamaized.net/trkd-images/LYNXMPEG221TA_L.jpg 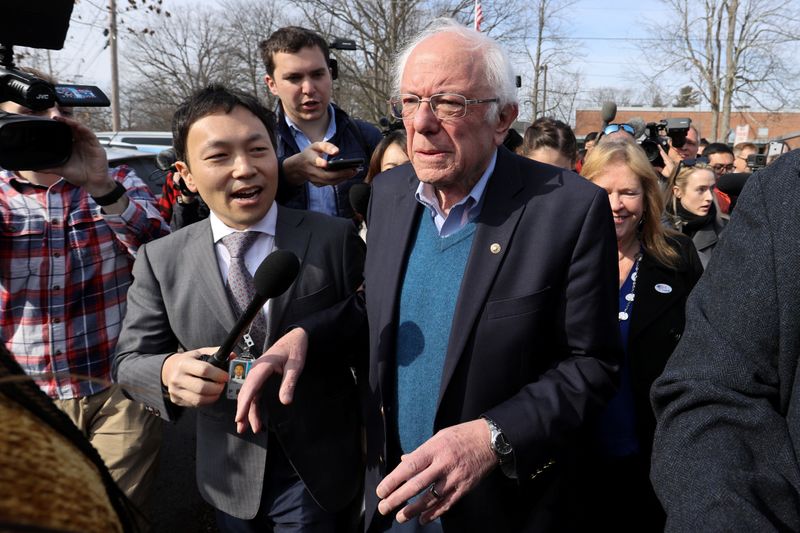 © Reuters. FILE PHOTO: Democratic 2020 U.S. presidential candidate Sanders departs after he and his wife Jane voted in the Vermont primary at their polling place in Burlington, Vermont

NEW YORK (Reuters) – A big victory by Bernie Sanders in Tuesday’s contests for the Democratic presidential nomination could add volatility to a market already consumed by the spread of the coronavirus and its economic fallout, analysts and investors said.

Some investors say the resurgence of former vice president Joe Biden in the race has been a positive factor for stocks, setting the stage for pressure should Sanders do better than expected on Super Tuesday, in which voters in 14 states are heading to the polls with delegate-rich California and Texas among those up for grabs.

To be sure, investor attention is more focused on the spread of the coronavirus, with stocks fluctuating wildly on Tuesday as Wall Street tried to digest the implications of the Federal Reserve’s emergency rate cut.

But the election remained at least a background risk, as investors put it, with a strong showing by Sanders, a democratic socialist, seen as possibly wounding stocks.

(Get all the Super Tuesday action: https://www.reuters.com/live-events/super-tuesday-id2923975)

Sanders’ favored policies, including Medicare for All legislation that would essentially abolish private insurance as well as regulation in areas such as the environment and banking, appear particularly negative for sectors such as healthcare, energy and financials, according to a note on Tuesday from Lori Calvasina, head of U.S. equity strategy at RBC Capital Markets.

A presidential victory in the Nov. 3 election by Sanders, a U.S. senator from Vermont, is seen by analysts at RBC Capital Markets as a bearish or very bearish outcome for 79% of the industries they cover, Calvasina said.

By contrast, the election of Biden is seen as a neutral outcome by most investors surveyed by RBC, “though the percent that have seen him as a bullish outcome was actually on the rise in our December survey,” Calvasina said.

Betting odds have strengthened for Biden, according to online betting site PredictIt, after the former vice president’s commanding win in the South Carolina primary over the weekend and endorsements from fellow moderates Pete Buttigieg and Amy Klobuchar after they dropped out of the race.

As of midday Tuesday, “Yes” bets for Biden on the question of “Who will win the 2020 Democratic presidential nomination?” were trading at 51 cents on PredictIt, compared to 40 cents for Sanders.

Sanders still leads Biden in polls for the nomination, 27% to 21.3%, according to an average of polls compiled by RealClearPolitics.

“If Biden’s current momentum…carries him through Super Tuesday, political risk premium in the markets should fall,” strategists at Natwest Markets said in a note.

Investors will be watching not only whether Sanders wins but how much support he gathers, given that some on Wall Street are skeptical he can gain enough backing to beat President Donald Trump in November, even if Sanders wins the nomination.

“Strong wins with expanding polling levels to 35+% would be indicative of being a stronger general election candidate,” Lance Wilkes, a healthcare analyst at Bernstein, said in a note.