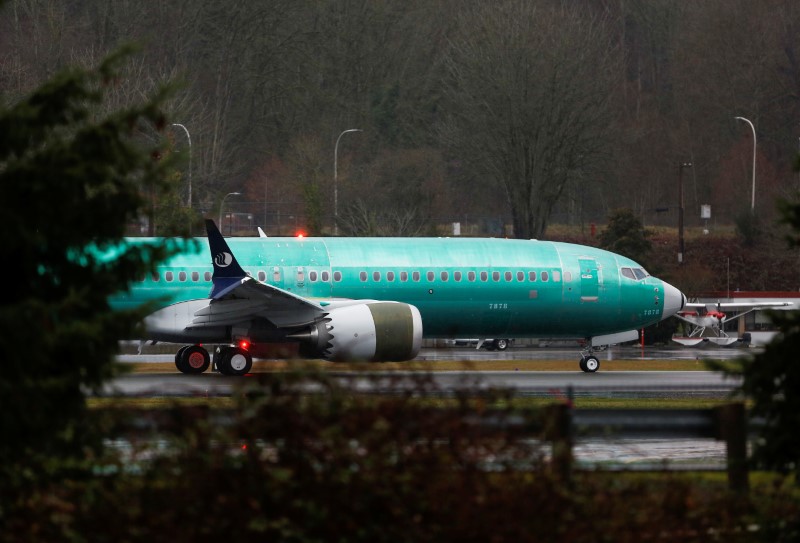 © Reuters. A Boeing 737 Max aircraft taxis the runway at the Renton Municipal Airport in Renton

WASHINGTON/CHICAGO (Reuters) – Boeing Co (N:) said on Tuesday it does not expect to win approval for the return of the 737 MAX to service until mid-year due to further potential developments in the certification process and regulatory scrutiny on its flight control system.

Boeing said it has informed airlines and suppliers of the new estimate, which is longer than previous forecasts and also takes into account new anticipated pilot training requirements.

Reuters reported last week that regulators had been pushing back the time needed to approve the plane, which was most recently expected to happen in February or March, a year after the jetliner was grounded worldwide.

Based on regulatory approval in the first quarter, the three U.S. airlines that operate the 737 MAX – American Airlines Group Inc (O:), United Airlines Holdings Inc (O:) and Southwest Airlines Co (N:) – were scheduling MAX flights in early June. They will now likely have to extend the timeline again. They have said it could take at least 30 days to resume flights following U.S. Federal Aviation Administration approval because of the time needed to ready the planes and train pilots.

The Chicago-based planemaker has been updating the 737 MAX flight control system and software to address issues believed to have played a role in two crashes in Indonesia and Ethiopia that killed 346 people within five months.

“Returning the MAX safely to service is our number one priority, and we are confident that will happen,” Boeing said in a statement. “We acknowledge and regret the continued difficulties that the grounding of the 737 MAX has presented to our customers, our regulators, our suppliers, and the flying public.”

Boeing said it will provide additional information with quarterly results next week.

The FAA said in a statement on Tuesday that it is following a “thorough, deliberate process to verify that all proposed modifications to the Boeing 737 MAX meet the highest certification standards.”

The agency is working with other safety regulators to review Boeing’s work and reiterated it has set no time frame for when the review will be completed.

Reuters reported on Monday that Boeing is in talks with banks about borrowing $10 billion or more amid rising costs after the two crashes involving the 737 MAX.

Boeing in recent days temporarily halted production of the 737 MAX in Washington state, a move it announced in December as it became clear that regulatory approval was taking longer than it had forecast.

Boeing has estimated the costs of the 737 MAX grounding at more than $9 billion to date, and is expected to disclose significant additional costs during its fourth-quarter earnings release on Jan. 29.

The company faces rising costs from halting production of the plane this month, compensating airlines for lost flights and assisting its supply chain.