Home
Market
Boeing's 777X jetliner takes off on maiden flight
Prev Article Next Article
This post was originally published on this sitehttps://i-invdn-com.akamaized.net/trkd-images/LYNXMPEG0O0QW_L.jpg 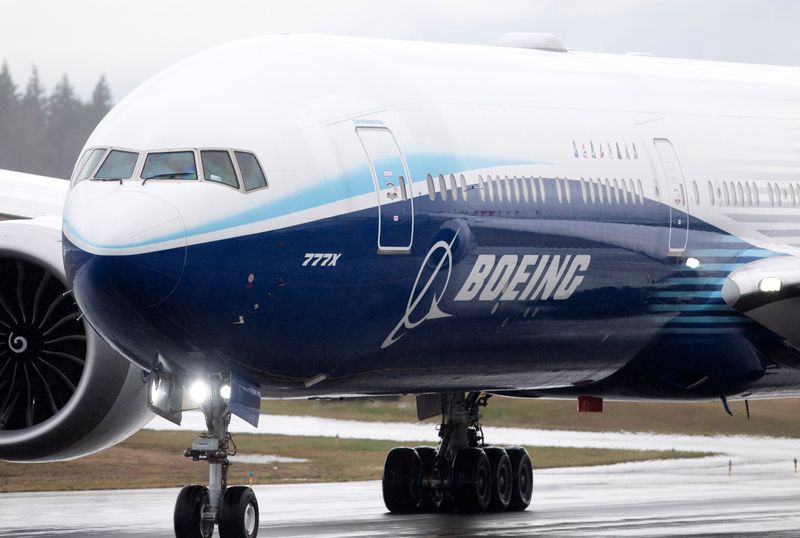 © Reuters. A Boeing 777X airplane taxis during an attempted first test flight from the company’s plant in Everett

SEATTLE (Reuters) – Boeing Co (N:) began the maiden flight on Saturday of the world’s largest twin-engined jetliner as the embattled planemaker steps up competition with European rival Airbus (PA:) in a respite from a crisis over its smaller 737 MAX.

The 777X, a larger and more efficient version of Boeing’s successful 777 mini-jumbo, took off outside Seattle at 10:09 a.m. local time (1.09 p.m. ET) after high winds forced the company to postpone two earlier attempts this week.

Boeing officials said the maiden voyage would last 3-5 hours and herald months of testing and certification before the aircraft enters service with Emirates in 2021, a year later than originally scheduled because of snags during development.

The aircraft is the larger of two versions planned by Boeing and will officially be known as the 777-9, but is better known under its development codename, the 777X.

Its most visible features include folding wingtips – designed to allow its large new carbon-composite wings to fit into the same parking bays as earlier models – and the world’s largest commercial engines, built by General Electric (N:) and wide enough to swallow the fuselage of a 737 MAX.

The flight is a boost for Boeing as it grapples with a broadening crisis over the 737 MAX, which has been grounded since March following two fatal crashes.

“To me this is the flagship for the big airlines around the world … it represents the great things we can do as a company,” 777X marketing director Wendy Sowers told reporters when asked about the flight’s importance in light of the MAX crisis.

Boeing says it has sold 309 of the aircraft – worth more than $442 million each at list prices – but analysts have questioned its heavy reliance on Middle East carriers that have scaled back purchases as they suffer a pause in their expansion.

The 777X will compete with the recently introduced Airbus A350-1000 which seats about 360 passengers. Both reflect the growing range and efficiency of twin-engined jets that are steadily displacing their older four-engined counterparts.

The two planemakers have clashed over the relative efficiency of their latest jets but both face worries about demand due to overcapacity and signs of weakness in the global economy.