Home
Stocks
BookWatch: The 1 thing workers want more of — and it’s not money
Prev Article Next Article
This post was originally published on this site

After surveying more than 1 million working adults over the last decade, we have found one thing that’s most likely to make employees feel better about their jobs, and most bosses have no idea what it is.

The elusive element of great work cultures? Gratitude from the boss.

Now, we aren’t talking about showering more indiscriminate “thank you’s” around the office. For anyone who has experienced well-meaning but clueless recognition from a higher-up (i.e., “Good work everyone!”), you know that for expressions of gratitude to work their magic they must be genuine and specific.

Leading in this way is not only about giving credit where it’s due, it’s about actually knowing where it is due. It’s about carefully observing the value employees are creating and then expressing heartfelt appreciation for the behaviors that move the team forward.

Our research has found the payoffs of getting this right come in boosting team performance and morale, in reduced employee turnover, and in higher customer satisfaction levels.

We interviewed Ken Chenault, the recently retired chairman and CEO of American Express, who told us many employees end up quitting unappreciative bosses who “want to present this image of being tough. They confuse being decisive with being compassionate,” he said. “One of the fundamental beliefs they miss is this: If you want to be an effective leader, you have to capture the hearts and minds of people. Part of gratitude is being vulnerable, but some leaders are very cautious about showing any vulnerability.”

He added that these types of bosses want to maintain the myth of the self-made man or woman—and showing gratitude would admit they needed help. As a result, they don’t establish the level of personal connection necessary to be meaningful in their employees’ lives.

One problem, we found however, is that a lot of managers already think they’re pretty good at this stuff. We found a gratitude perception gap, with some 67% of managers thinking they are above average in offering praise and recognition to their employees but only 23% of their workers agreeing. You could drive a Mac truck through that gap.

It is not a leap to realize that, clearly, most team members would be receptive to a change from their bosses. How many conversations have you had with friends about a manager they wish would see the light? Imagine one day they said, “He finally told me I do a good job with my sales reports. It’s about time!”

Will it take some convincing that the boss is being genuine and really making a change? Almost certainly. But pretty soon the shock will fade once showing gratitude becomes a regular occurrence. The whole tenor and energy level of a team can be transformed remarkably quickly. 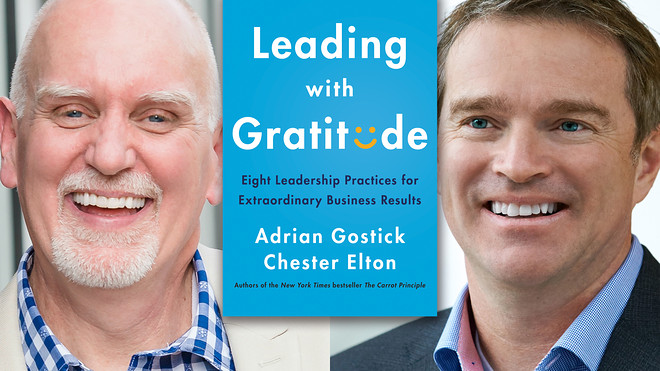 Dave Kerpen can attest to that. The chairman of New York City’s Likeable Media, Kerpen told us he started out as a gratitude cynic. “Anything that sounds too good to be true I’m going to be skeptical of. How in the world would a feeling like gratitude impact my business or make me more money? It doesn’t make sense. But I kept hearing about gratitude from people I knew were successful. I thought I at least needed to give it a shot.”

Kerpen became so converted to the practice, he uses gratitude to give himself regular boosts of energy. “When I am in a bad mood, I walk away from the situation, open up the Notes on my phone, set the timer for two minutes, and start typing the things and people I’m grateful for. Two minutes later I come back to my team, or my family, and I’m in a better mood—every single time.”

His newfound focus on sincere, frequent, and timely gratitude has also paid off for his firm. Not only has Likeable Media become one of the New York City’s fastest-growing marketing firms, it has been named a Best Place to Work four years in a row.

It’s the why, not the what or the how

As many leaders we interviewed attested, expressing authentic gratitude is about more than what a leader says or even how she says it—it’s about why she says it. Most people are quite sensitive to that. So if a leader tries to be genuine—even the delivery style seems a little stilted at first—people are going to pick up on the sincerity. A key is to recognize core behaviors that the manager truly values in his or her team.

While learning to practice the soft stuff like this might feel touchy-feely, we’ve found in good times and bad, helping those around us feel valued and providing a little boost of gratitude at work can make a huge difference.

Adrian Gostick and Chester Elton are the authors of “Leading with Gratitude: Eight Leadership Practices for Extraordinary Business Result” and the cofounders of The Culture Works, a global training firm that counsels the leadership teams of Fortune 500 companies on organizational culture and employee engagement issues.