Home
Market
Bottled water firms turn on the taps with filters, flavors and fizz
Prev Article Next Article
This post was originally published on this sitehttps://i-invdn-com.akamaized.net/trkd-images/LYNXMPEG130J3_L.jpg 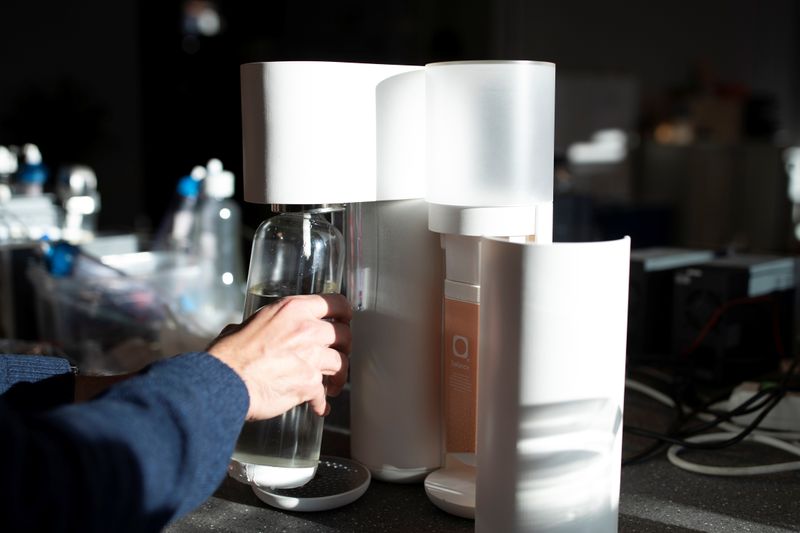 By Silke Koltrowitz and Emma Thomasson

Nestle, the bottled water market leader, is also considering a machine for the home with filters, flavors and fizz that would be a smaller version of its Refill+ dispensers being rolled out in cafeterias, hotels and offices this year.

Concerns about plastic waste and the environmental impact of transporting bottled water are prompting more people to drink straight from the tap, which is in turn pushing water firms to come up with new products to keep customers on board.

“Bottled water as we know it today, I don’t think will exist in 30 years. You will see much more point-of-use solutions like ours,” said Moritz Waldstein, chief executive of Mitte, the Berlin-based company backed by Danone.

“I am of the strong belief that it will be a fraction of the market size that we have today,” he told Reuters.

The global bottled water market was worth $135.6 billion in 2019, according to market researcher Euromonitor International, and is expected to grow to $170.9 billion by 2022, with demand expanding fastest in Asia.

Like Nestle, Mitte is betting that concerns about plastic pollution and contamination of public water supplies mean consumers will want countertop devices at home that filter tap water, as well as adding fizz and flavors like SodaStream.

In 2018, a Danone fund which invests in firms responding to growing environmental awareness joined a $10.6 million funding round for Mitte, which is developing a device to purify tap water and add minerals via cartridges.

Danone, the world’s third-largest bottled water seller with brands such as Evian, Volvic and Badoit, had slightly lower water sales in its third quarter. It is also looking to boost plastic recycling and encourage alternatives – such as Mitte.

“We think there could be demand from sophisticated consumers who for many reasons will prefer to make their mineral water at home,” said Danone Chief Executive Emmanuel Faber.

Mitte said it received extra funding from its shareholders in an investment round in December, including the Danone fund, and it might raise more money as interest had been very high.

Mitte’s first machine to go on sale will both filter and carbonate water. Set to retail for about 200 euros ($220), it will mostly be sold online and Mitte will initially target top SodaStream markets such as Germany and Sweden.

The company also has high hopes for the United States. When it ran an online kickstarter campaign to raise funds in 2017, the most pre-orders for its machines came from the United States, followed by Germany and the United Kingdom.

Sparkling water has long been popular in western Europe but has only really taken off in North America in recent years as health-conscious consumers swap sweet colas for water, often flavored or with infused vitamins and minerals.

PepsiCo (NASDAQ:) CEO Ramon Laguarta said in October that SodaStream, which it bought in 2018 for $3.2 billion, was doing better than it expected, particularly in western Europe, Japan and Canada.

He said SodaStream was planning “transformational programs” in 2020 to boost penetration in the U.S. market, where Costco (NASDAQ:), Home Depot (NYSE:) and Kohl’s and Target (NYSE:) currently sell it, with a basic device costing about $85.

Nestle is also making a renewed drive to revive U.S. sales, where it has lagged rivals such as PepsiCo, LaCroix and Coca-Cola (NYSE:) in the sparkling and flavored water market.

In October, Nestle said it was overhauling its water division, which generates 9% of group sales, after it posted growth of just 0.5% in the first nine months of 2019.

Federico Sarzi Braga, the new head of Nestle’s water business, told Reuters in his first interview that it would put more focus on its premium sparkling water brands Perrier and S.Pellegrino in the United States.

“The value we can get from functional and flavored water is much higher,” he said. “So we play strongly in the premium and super premium segment, especially in sparkling.”

Sarzi Braga, an Italian who started out with Nestle in 2000 at S.Pellegrino, said products launched last year in the United States – including Perrier mixed with fruit juice and flavored S.Pellegrino Essenza – were selling very well.

The flavored, sparkling and functional category already makes up 45% of bottled water sales in western Europe and almost 75% in the world’s biggest sparkling water market, Germany.

Nestle’s top-selling bottled water, however, is the budget still brand Pure Life which has been suffering from the tap water revival and an increase in freight costs – which is where its Refill+ water dispensers come in.

It has yet to finalize where the Refill+ system, due to be rolled out to businesses by mid-2020, will be launched first.

“From still water without flavor to caffeinated, carbonated raspberry water, you can do everything. You choose, pay with your smartphone and that’s it,” Nestle Chief Executive Mark Schneider told Reuters.