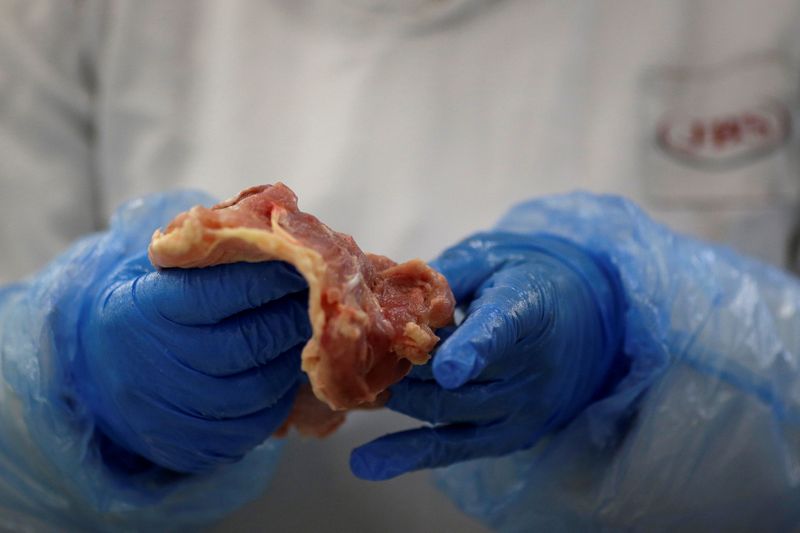 SAO PAULO (Reuters) – Meat lobby groups have asked the government of Paraná, Brazil’s largest chicken producing and exporting state, to reconsider local regulations aimed at increasing spacing between food plant workers during the COVID-19 pandemic, according to a letter seen by Reuters on Friday.

The meat lobby argues that the minimum 1.5-meter (5 feet) distancing required under state norms would reduce output by as much as 43%, Brazil’s animal protein association ABPA and two local trade groups said in the joint letter sent on July 2.

The average worker distance at pork and poultry facilities is 0.85 centimeters (.33 inches), the letter said.

Federal rules passed on June 19 dealing with operation of Brazilian slaughterhouses amid the pandemic should prevail over the state norms, the meat lobby’s letter said. Federal rules require only one meter of physical distancing, which labor representatives in three southern states told Reuters is insufficient.

According to the industry, one meter of distancing would already represent an 18% output drop.

Responding to the companies’ stance, Paraná’s Chief Labor Prosecutor Margaret de Carvalho requested “an urgent meeting” with the governor on Thursday, according to a separate letter seen by Reuters.

She defended the continued enforcement of local rules, as meatpackers became hotbeds for the novel coronavirus.

“Some 16 slaughterhouses have had or still have outbreaks, with six units recording more than 100 cases each,” Carvalho’s letter said.

In a statement on Friday, ABPA, which represents meat producers, including JBS SA (OTC:JBSAY) and BRF SA (NYSE:BRFS), reiterated the position expressed in the July 2 letter.

“The harmonization of standards will guarantee legal security for producers,” ABPA said, emphasizing the need to keep jobs and maintain food supplies.