U.S. stocks have extended the fourth quarter’s gains this year, and investors expect the party to continue.

Ironically, this kind enthusiasm is the stock market’s biggest enemy.

The math and crowd psychology behind any supply-and-demand-driven market can be boiled down to this simple chain of events:

• Buyers convert into owners (owners can only sell, not buy).

• Fewer buyers are left to bid up prices.

I discussed the exact inverse (excessive pessimism) of that chain reaction in October 2018: “Today’s stock market pessimism is a reliable sign of a pending rebound.”

The chain reaction of excessive sentiment itself is predictable and almost fail-proof. However, the timing and scope is variable and harder to predict, which doesn’t mean we won’t try.

Timing and scope of decline

I monitor dozens of sentiment indicators, but to help gauge the timing and scope of an upcoming decline, I like to use the CBOE equity put/call ratio. Here’s why:

• It is an actual “put your money where your mouth is” indicator rather than a non-committal poll.

• It has reached a notable extreme.

On Jan. 10, the five-day simple moving average (SMA) of the put/call ratio fell to 0.492. This means that investors spent twice as much money on bullish call options than on bearish put options. 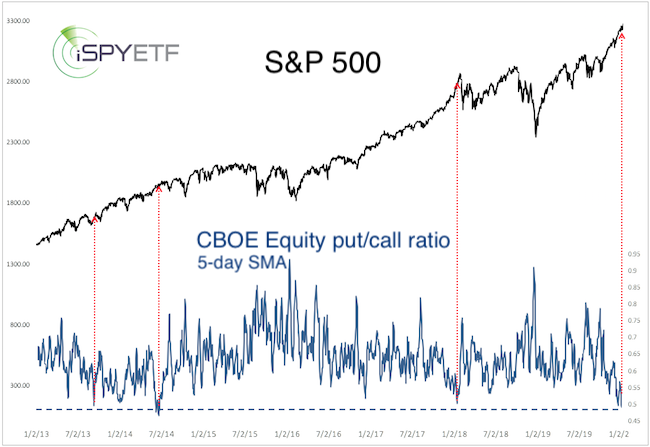 The red lines highlight other times the put/call ratio was as low. In January 2018, the S&P 500 took a nasty spill within 10 days of the signal, in June 2014, the decline was more delayed and less pronounced, and even less so in September 2013. 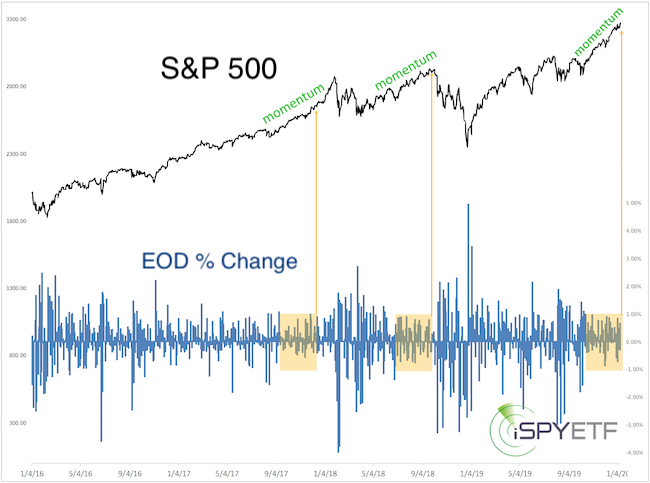 All three instances mark periods of extremely strong momentum, and momentum — like a tsunami — tends to carry stocks higher than most expect.

2. None of the above corrections marked a major top.

I picked the above examples because they represent the common denominators I’ve found among almost all sentiment- and moment-based studies comparable to the current situation:

• Over the next one to four months, all the gains accrued from today on are very likely to be erased.

• Any correction is unlikely to mark the end of this bull market.

Investors unwilling to endure a 10%-20% temporary paper loss could use the 20-day simple moving average as a potential stop-loss.

A detailed short- and long-term risk-reward heatmap based on dozens of indicators, studies and signals is available here: S&P 500 risk vs reward heatmap.