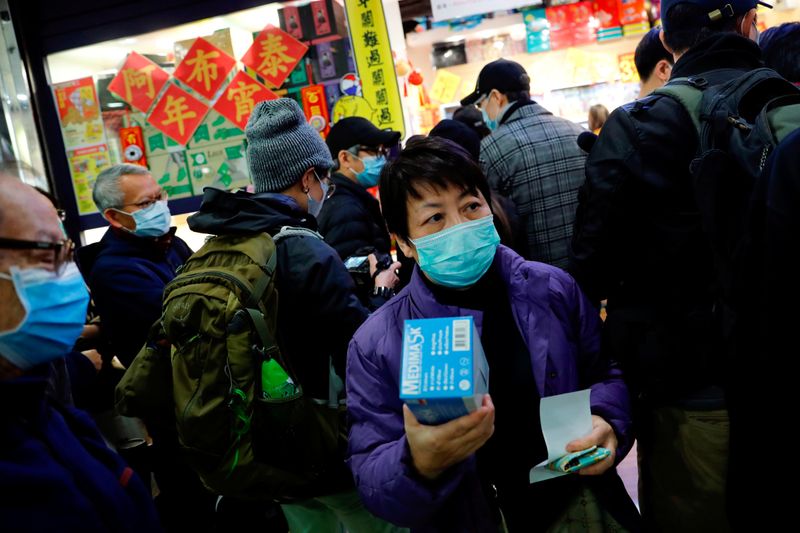 HONG KONG (Reuters) – Temporary relocation for families and face masks were two of the top issues concerning Hong Kong finance professionals as they began their first full business week, after the Lunar New Year holidays, under the shadow of a fast-spreading coronavirus.

Financial firms in Hong Kong have variously told or allowed staff to work from home as part of broader precautions against the virus – which can be transmitted from person to person, has claimed 361 lives in mainland China and has spread to around two dozen other countries.

In many cases they have also asked workers returning from the mainland, where the coronavirus originated, to quarantine themselves for up to two weeks.

“The loss of staff, either to the virus itself, or the unwillingness of staff to come in, is a real issue. Plans for telework need to be implemented and tested,” said Harry Rhulen, chief executive of New York-headquartered adviser CrisisRisk.

Additional caution would be another blow for Hong Kong whose economy and market have already suffered from months-long pro-democracy protests and the U.S.-China trade war.

Initial public offerings, other equity sales and bond deals, the bread and butter of investment bankers, typically take at least a week to get going following new year holidays but dealmakers now fear a longer pause.

“It’s definitely not business as usual for us or our clients and our entire focus now is to make sure that the things that were in the pipeline get executed somehow,” said a senior commercial banker with a large European bank.

An Australia-based lawyer said he had turned down a request for a meeting in Hong Kong for fear he may not be able to return. Australia has barred travelers from the mainland, but not those from Hong Kong, from entering. The Philippines has included the city in its ban on travelers from China.

All the people spoke to Reuters on condition of anonymity as they were not authorized by their firms to speak on the subject.

One Hong Kong-based private equity executive said he had canceled all his meetings.

“My priority is not really on (business) anyway – I’m more concerned about the short supply of (face)masks,” he said.

“For all I know, investment teams in other firms are all busy looking for masks. They are not looking at any projects right now,” he added.

Worries about the spread of the coronavirus wiped around $400 billion off the value of China’s stocks as markets reopened after the holidays.

Reflecting the overall gloom, cafes in Hong Kong’s compact Central business district were noticeably quieter on Monday, according to baristas and customers.

Many expatriate professionals have sent their families away as they eye the threat of further travel bans.

Hong Kong has closed all schools until March 2.

“There’s nothing (for them) to do with schools and all sports and cultural facilities closed – and no one wants their kids mingling at play dates,” said a banker whose family had left.