Home
Stocks
Buy the dip? Here’s how some analysts say investors should play it
Prev Article Next Article
This post was originally published on this site 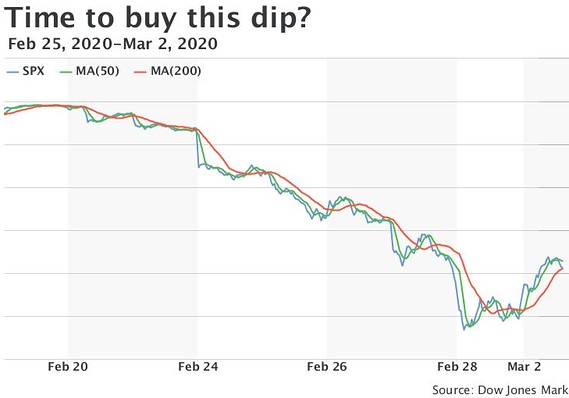 The worsening coronavirus outbreak, and concerns about its impact on global economic activity, walloped global stocks last week, pushing U.S. benchmarks into correction territory and marking the worst week since the global financial crisis of 2008.

The question for most investors now is: is it safe to go back in the water?

MarketWatch conducted interviews and collected commentary from analysts, strategists, and pundits, which are excerpted below. Most observers are erring on the side of caution, but their reasoning may provide some useful insights on how to navigate corrections like the current one.

‘A call to ‘buy the dip’ is inherently a market timing call and should be recognized as such.’

Corey Hoffstein, Newfound Research LLC: “If you believe markets are a screaming buy today — more than they were last week, or even more than they were last October — you are inherently market timing. Which is fine, but should at least be recognized. A call to ‘buy the dip’ is inherently a market timing call and should be recognized as such. If investors are going to make such a call, we believe it is important for them to consider where they believe the market is mis-pricing future expectations: yield, growth, or risk appetite.”

Tom Essaye, The Sevens Report: “There is no question that growth and earnings will be lower in the coming months, and while we saw some pretty significant cuts to expected S&P 500 2020 earnings per share(some as low as $150), the rational consensus is for EPS currently between $165-$170/share for 2020. Taking the midpoint ($167.50), that means the S&P 500 is trading at 17.6X 2020 EPS, down from just under a 20X multiple less than two weeks ago…we think that is too pessimistic for the current situation. Production and economic activity in China are rebounding, and while that didn’t fit last week’s doom-and-gloom narrative, Starbucks SBUX, +3.38% and Apple AAPL, +6.65% both had positive commentary on China activity and that is a significant positive…

“Now, does that mean we should rush in and buy stocks hand over fist today? Of course not, says Essaye: “There is been enormous technical and psychological damage done to the markets and that will take time to work through — so at best we can likely expect several weeks or a few months of chop as the market finds a bottom.”

‘It is too early to bottom-fish in equities.’

BCA Research: “The COVID-19 outbreak is a serious real-time exogenous threat and our view might change as developments unfold. For now though, we believe that the fundamentals of the US economy are supportive of a cyclically bullish stance. However, caution is still warranted in the near term. It is too early to bottom-fish in equities.”

Katie Stockton, Fairlead Strategies: “The pullback has not damaged the long-term uptrend but there’s been a loss of short-term and medium-term momentum. Now we have some key support levels being tested. It’s overly bearish. When you get an overly bullish condition washed out so quickly, that tends to give way to a quick snapback. You want to stay directionally in sync with sentiment. As the Fear and Greed Index falls, so does the market. Right now it’s at 10% — there’s not much room for it to go lower. That sentiment is so important because this is a pullback driven by behavior, folks are fearful about the virus. You get explosive moves with heavy volume that tend to be climactic at times. It’s scary for all of us.

‘To see where we close this week is probably prudent.’

(Last week) what would have been worse would have been a slow grind lower as opposed to a dramatic sell-off. That said, it’s really important to see some support discovery here. Meaning, the oversold bounce develops and we get the major indices back to a support level. For the S&P SPX, +2.61%  I’m looking for a range of 2990-3030. A best-case scenario would be above that. Today’s action would suggest it’s capable of that. But I always like to wait for confirmation. To see where we close this week is probably prudent.”

Jefferies Equities: “Huge drawdowns frequently represent the punchline, and not the setup. But realistically, by the time the dread sets in, we are almost always already on our way back up. While there are many market prognosticators that will tell you why buying a dip might not work, and why every time is different, it is hard to argue with human nature and history. We analyzed all of the 3 standard deviation single-day and rolling (five-day) moves the S&P 500 has had since 1990. While we found that the bounces tend to be swift and robust, more importantly, performance tends to be overwhelmingly positive over a (three-month) horizon. Ex-(the Great Financial Crisis), three-month S&P 500 performance was positive over 90% over the time, in both 1-day and 5-day scenarios.”

‘Tread lightly, because the situation continues to evolve, but remain open to buying a truly bad close.’

Nicholas Colas, DataTrek Research: “We take no comfort in Friday’s snapback and remain on ‘crash watch’, looking for a +5% decline to signal an entry point for US equities. This isn’t 2008, however. Policymakers agree much more about what to do about COVID-19 now than Lehman (for example) back then. But nor is this a garden-variety recession scare. Case in point: we have zero visibility into Q1 US corporate earnings, which will reveal just how much negative operating leverage exists. Bottom line: tread lightly, because the situation continues to evolve, but remain open to buying a truly bad close.”

‘We see little reason to assume markets have found a support level, despite the extreme levels of risk pricing and the potential for short-term bounces.’

Stuart Kaiser, UBS: “Episodes when the Cboe Volatility Index VIX, -11.87% rises above 30 are fairly rare historically and accompany an average SPX drawdown of 10% with a range of -5% to -21% vs. its trailing one month high. The average rise in the VIX in those cases is 20% but much larger moves, including today, are not unprecedented. We see little reason to assume markets have found a support level, despite the extreme levels of risk pricing and the potential for short-term bounces. In 2015 the VIX reached 40 on 24-Aug and did not fall below 20 for 30 trading days with an average level of 26, VIX reached 30 on 21-Dec-18 but was below 20 in 13 days, and in 2008 VIX reached 30 on 15-Sep and was above 20 for 331 days.”

‘We probably will see another down leg from here but what we tend to see is when everyone gets so bearish, that is when they miss out on opportunities.’

David Mazza, Direxion: “From a longer term perspective, valuations across the market just got a lot more attractive. For investors that do not believe this will lead to a true 2008 type of global downturn, dipping your toes into the water does make some sense. This is data financial markets have a great deal of difficulty pricing in. (COVID-19) has already led to more deaths than SARS. It’s quite scary but markets tend to overreact in the short term, and I think we are starting to see some of that. While this will be a relatively difficult period, for markets and the economy, we will continue to persevere and press ahead. Until we see US consumption turn negative, that continues to position me for the long-term positive. Invest with faith. We probably will see another down leg from here but what we tend to see is when everyone gets so bearish, that is when they miss out on opportunities.”

See: The situation in China is even worse than you think, says this analyst with a history of accurate calls