Home
Market
California hospitals overrun even as vaccine is rolled out
Prev Article Next Article
This post was originally published on this sitehttps://i-invdn-com.akamaized.net/trkd-images/LYNXMPEGBH11C_L.jpg 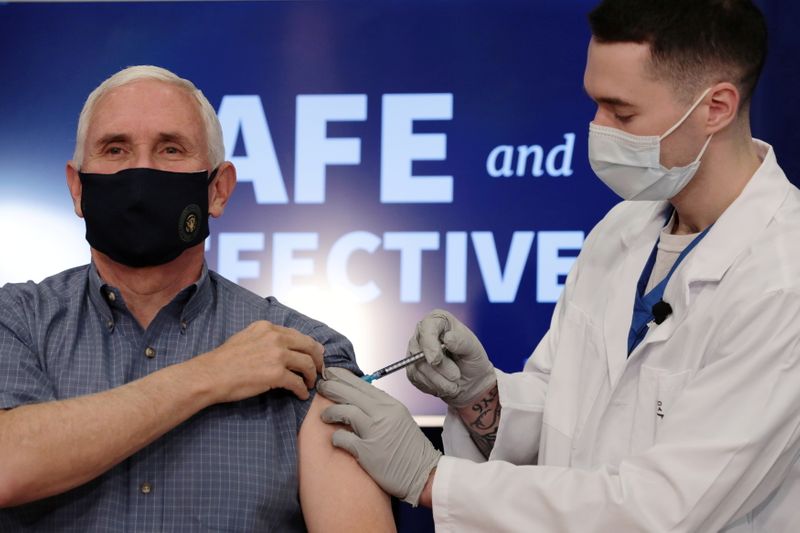 Another 41,000 people tested positive in the most populous U.S. state on Thursday, and 300 died, state public health officials said. In a state with 40 million residents, only about 1,200 intensive care beds remained available by Friday – just 2.1% of the total, the California Department of Public Health said.

“We anticipated a surge, but I’m not sure if anyone imagined it would be as bad as it has been,” said Adam Blackstone (NYSE:BX), a spokesman for the Hospital Association of Southern California.

California’s struggle opens a window onto the coronavirus’ deadly rampage across the United States, even as vaccines provide hope that the pandemic may soon end.

The United States leads the world in new coronavirus cases, reporting a record 239,903 new cases on Thursday, Reuters data shows. The U.S. death toll surpassed 311,000, and U.S. hospitalizations have set records on each of the past 20 days, approaching 114,000 on Thursday, according to a Reuters tally.

In California, the total number of cases rose to nearly 1.8 million, with more than 22,000 deaths.

One vaccine, made by the pharmaceutical giant Pfizer (NYSE:PFE), has already been distributed to U.S. states and inoculations have begun. Rollout of a second, by Moderna (NASDAQ:MRNA) Inc is expected as early as this weekend. The Moderna vaccine was approved for use in the pandemic by the U.S. Food and Drug Administration on Friday.

But it will be months before the impact of the new vaccines will slow the progress of the pandemic. New cases are still rising in more than a dozen U.S. states.

In California, hospitals are strained, with some serving the sick in tents set up outside in chilly weather, and people awaiting care in hallways. Intensive care units were completely full in densely populated Southern California, which includes Los Angeles, as well as in agricultural hub San Joaquin Valley, the state said.

Nearly all of the state is under emergency stay-at-home orders, after the San Francisco Bay Area ran low on intensive care beds on Friday and was added to a shutdown list that already included Southern California, the San Joaquin Valley and the Sacramento region.

“We expect to have more dead bodies than we have spaces for them,” Los Angeles Mayor Eric Garcetti told a briefing on Thursday.

California’s woes will likely worsen as patients who contracted the disease over Thanksgiving are joined by those exposed after gathering with friends and family for Christmas and Hanukkah, Blackstone said.

Pence received his COVID-19 vaccine live on television on Friday, seeking to shore up public support for vaccinations as U.S. regulators were on the cusp of approving a second vaccine for emergency use.

After U.S. deaths from the coronavirus topped 3,000 for a third straight day, Pence called the vaccinations a sign of hope, with 20 million doses expected to be distributed nationwide before the end of December and hundreds of millions more going out in the first half of 2021.

Beyond the logistical challenge of the most ambitious vaccination campaign in decades, health officials must convince a skeptical public vaccines are safe and effective. A recent Reuters/Ipsos poll found only 61% of Americans were open to getting vaccinated.

Pence and other officials being vaccinated publicly “is symbolic to tell the rest of the country the time is now to step to the plate, and when your time comes, to get vaccinated,” said Dr. Anthony Fauci, director of the National Institute of Allergy and Infectious Disease.

Frontline (NYSE:FRO) healthcare workers, first responders and nursing home residents have been given priority, but a parade of high-profile inoculations could soon follow. Fauci, who still sees patients, has said he might receive the vaccine within days.

Former Presidents Bill Clinton, George W. Bush and Barack Obama have volunteered for public inoculations, and President-elect Joe Biden, who is due to take office on Jan. 20, will get his next week, his aides said.

While departing President Donald Trump has yet to embrace messages about social distancing and mask-wearing, he has encouraged people to get vaccinated and championed his administration’s Operation Warp Speed program to promote development and distribution of vaccines.

But Trump, who survived a bout with COVID-19 a few weeks before losing the Nov. 3 election to Biden, has yet to announce his plans for getting a shot.