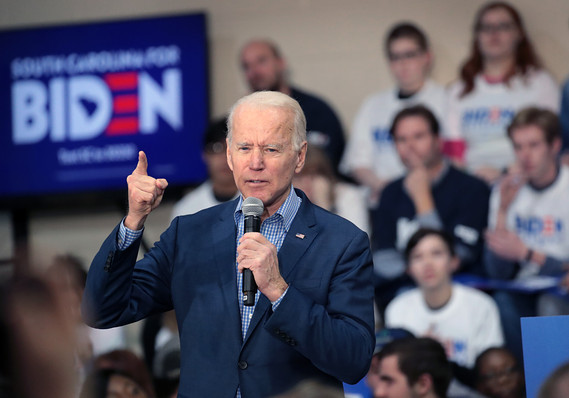 Joe Biden speaks during a campaign stop at Coastal Carolina University on Thursday in Conway, S.C.

Joe Biden won South Carolina’s Democratic presidential primary on Saturday, giving the former vice president his first victory in the 2020 nominating battle and a burst of momentum ahead of the critical Super Tuesday contests next week.

South Carolina was widely seen as a must-win for Biden, who is aiming to be the moderate alternative to self-described democratic socialist Sanders.

Biden’s campaign may enjoy only a short-lived boost, however, as he faces a steeper test on Super Tuesday. Sanders, currently the leader in the delegate count, is topping polls of states including California and Texas, and is the front-runner in national surveys, according to RealClearPolitics.

“If Biden can win southern states like Alabama, Arkansas, North Carolina, Oklahoma, Tennessee, and Texas and cross the 15% delegate threshold in a state like California, he will firmly position himself as the Sanders alternative,” wrote analysts at Beacon Policy Advisors in a note on Friday. Those seven states, plus seven more and U.S. territory American Samoa, vote on Super Tuesday.

Sanders held a rally Saturday in Warren’s home state of Massachusetts, and projected confidence as that state’s voters prepared to go to polls Tuesday. “If we have the largest voter turnout in the history of the Massachusetts primary, we can win here in Massachusetts, we can win the Democratic nomination, we can defeat Donald Trump and we can transform this country,” Sanders said in Boston, according to the Boston Herald.

The African-American vote was key in South Carolina, and Biden scored a critical endorsement on Wednesday from Rep. Jim Clyburn, the highest-ranking black member of Congress. Buttigieg, Klobuchar and Warren have performed poorly in polls of black voters — who make up about 60% of South Carolina’s Democratic electorate.

South Carolina offers 54 delegates of the 1,991 needed to win the Democratic nomination on the first ballot at the party’s convention in July. Ahead of Saturday’s primary, Sanders led in the delegate tally, followed by Buttigieg, Biden, Warren and Klobuchar, according to a tracker by NBC News.

Health care was the leading issue among South Carolina’s Democratic voters, according to the Associated Press. Sanders’ agenda includes “Medicare for All,” canceling student debt and reducing income inequality, and President Donald Trump has been eager to paint the Vermont senator and other Democrats as a threat to American prosperity and the U.S. stock market DJIA, -1.39%, even as it reels from the coronavirus outbreak.

Trump on Friday night urged Republicans to vote in South Carolina’s Democratic primary, and pick who he described as the “weakest” candidate. The state’s open primary means voters may participate in any contest. South Carolina’s Republican Party canceled its primary, one of just a handful of states to scrap GOP nominating contests this cycle.

“I think maybe Crazy Bernie has it,” Trump said about Sanders at a rally in North Charleston, S.C., after asking audience members to cheer for the Democrat they thought he could beat the easiest in November. Sanders has called Trump the most dangerous president in modern U.S. history.

Biden’s appeal to moderates includes his pledge to build on the Affordable Care Act, or Obamacare, named after the president he served under for eight years. Long popular with African-American voters, the former vice president has also proposed creating national standards for home appraisals, as part of an effort to stamp out racial discrimination in the real-estate industry.

A prolonged slog for the nomination would raise the possibility of a contested convention, in which no candidate will win the magic number of delegates on the first ballot at this summer’s convention in Milwaukee. The last time the Democrats’ convention went past the first ballot was 1952.

Now see: How Democrats could end up deadlocked on a presidential nominee for the first time in 68 years.