A Hall of Fame jockey and animal-welfare advocates were among those pushing Tuesday for a bill that would establish a new authority overseeing U.S. horse racing, but the bipartisan Horseracing Integrity Act also is drawing flak from Kentucky Derby owner Churchill Downs Inc. and other industry players.

“Right now, there are almost no controls on what therapeutics horses are given while in training,” retired jockey Chris McCarron said at a House subcommittee’s hearing.

The bill aims to create a new anti-doping authority, and it has found support amid a rash of horse deaths at racetracks last year. For example, 38 horses died in 2019 at Southern California’s Santa Anita Park, which has instituted drug-use reforms. The legislation looks likely to pass in the House, given that more than half of the Democratic-led chamber’s members have signed on as co-sponsors of it.

But top officials from New Jersey’s Monmouth Park Racetrack and the Association of Racing Commissioners International spoke out against the Horseracing Integrity Act at Tuesday’s hearing, and Churchill Downs Inc. CHDN, +0.55% voiced its concerns with the bill in a statement to MarketWatch on Wednesday.

“And although I’ve been opposed to federal legislation, I want to be part of the solution — not part of the problem — in preventing this. I’ve worked hard with my colleagues on the NTRA special committee to come up with comprehensive solutions for you,” Drazin added, referring to the National Thoroughbred Racing Association.

The bill “duplicates a framework that’s already in existence,” said Edward Martin, ACRI’s president and CEO, during the Capitol Hill hearing. “The goal of trying to get to uniformity is a very good goal. We believe there’s substantial uniformity, but not total uniformity, with regard to the testing in the labs. The labs are accredited, and we think you can achieve uniformity by adopting the ARCI model rules.”

Churchill Downs Inc. said in its statement that the proposed legislation, “which is very controversial across the industry, is laudable in seeking fairness of competition through medication reform, a concept we absolutely support, but lacks broad consensus on how it will work, how it will be funded and what agency has the expertise and willingness to provide the necessary oversight.” The horseracing and gaming company, which owns the Churchill Downs racetrack where the Kentucky Derby takes place every May, also said the bill “does not address track-safety protocols.”

“We will continue to implement meaningful procedures at Churchill Downs that address the safety and welfare of our equine and human athletes, and this commitment extends to working with industry leaders and regulators,” the company added.

The Horseracing Integrity Act was the top focus of Churchill Downs Inc.’s Washington lobbying efforts last year, according to a Center for Responsive Politics analysis of disclosures. The bill was reintroduced in the House a year ago by Republican Rep. Andy Barr of Kentucky and Democratic Rep. Paul Tonko of New York. They’ve been rolling out versions of the legislation since 2015.

Barr told the subcommittee on Tuesday that his bill will “advance the safety, the integrity and the international competitiveness of the sport.”

“This idea that federal legislation is the wrong way to go — if you go back to The Jockey Club minutes from the 1970s and the 1980s, when they were discussing medication reform, they were saying back then that we don’t need federal legislation. The efforts to reform the industry by the industry itself — the efforts through interstate compacts — have failed,” the GOP congressman said. 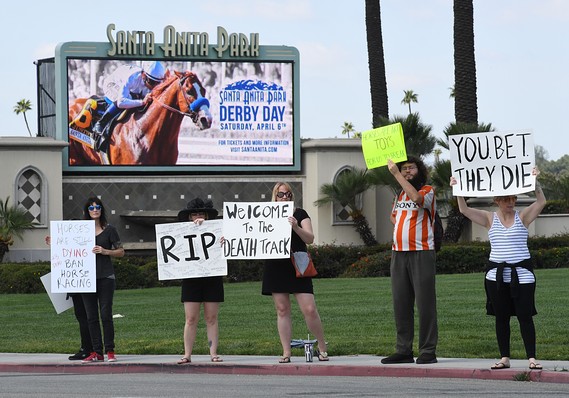 The Jockey Club, an organization that maintains the breed registry for thoroughbreds, is part of the Coalition for Horse Racing Integrity, a group that supports Barr and Tonko’s bill.

The measure has an “excellent” chance of becoming law, said The Jockey Club’s president and chief operating officer, Jim Gagliano, in a statement to MarketWatch. It’s expected to pass the House with “strong support,” and there is “also strong support in the Senate with 24 senators co-sponsoring the bill,” he said.

“This bill does not create new federal bureaucracy but rather an independent and private authority to manage racehorse medications, which should be a positive with the Trump administration,” Gagliano added.