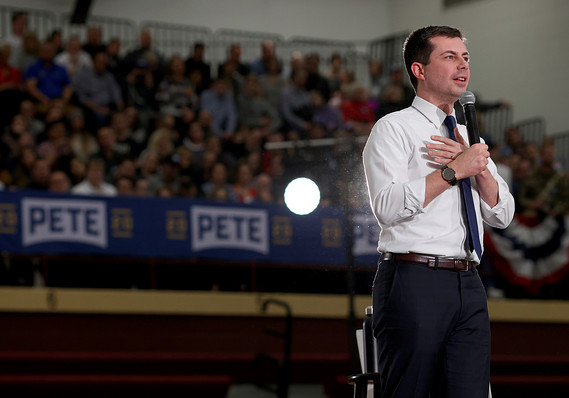 Pete Buttigieg all-but declared victory in the Iowa caucuses, despite the lack of results, saying ‘by all indications, we are going on to New Hampshire victorious.’

The Hawkeye State’s caucuses began at 8 p.m. Eastern time, but results were still unknown past midnight. Candidates including Joe Biden, Amy Klobuchar, Elizabeth Warren and Bernie Sanders addressed supporters in the absence of any results, vowing to move on to the next contest in New Hampshire, and beyond.

“I have a good feeling that we’re going to be doing very, very well here in Iowa” when the results are known, Sanders said. Ex-South Bend, Ind., Mayor Pete Buttigieg appeared to claim victory, telling supporters, ”by all indications, we are going on to New Hampshire victorious.”

Iowa’s caucuses set off a sprint to the Democratic Party’s convention in mid-July in Milwaukee, where a candidate will need 1,991 delegates to secure the nomination to take on President Donald Trump. A total of 41 are at stake in Iowa.

Sanders led in polls going into Monday’s caucuses. Investors SPX, +0.73%   were seen likely breathing a “sigh of relief” if Biden wins in Iowa, according to analysts at Height Capital Markets. The former vice president is seen as a moderate compared to Sens. Sanders and Warren.

Read: Investors will ‘likely breathe a sigh of relief’ if Biden comes from behind to win in Iowa, analysts say.

Polls of caucusgoers taken as they headed to events Monday evening suggested Iowans were more interested in a candidate who could beat Trump in November than they were in someone who shared their positions on key issues. About two-thirds of voters — 63% — participating in the caucus said they would rather see the Democratic Party nominate a candidate who “can beat Donald Trump,” according to an NBC News survey.

A spokeswoman for the Iowa Democratic Party said “inconsistencies” were found in reporting three sets of results for the caucuses and there was no hack or intrusion.

Trump’s campaign manager, Brad Parscale, said in a statement that the process was more cause not to trust Democrats.

“Democrats are stewing in a caucus mess of their own creation with the sloppiest train wreck in history,” he said.

Heading into the caucuses on Monday, Sanders held a roughly four-point lead over Biden, with Buttigieg in third place and Warren in fourth. Klobuchar was in fifth, according to an average of polls from RealClearPolitics.

“It looks like it’s going to be a long night, but I’m feeling good,” said Biden.

Warren said it was “too close to call” so she said “I’m just going to tell you what I do know.”

“We don’t back down,” she told supporters.

Klobuchar, who was first to speak, said, “we know there’s delays” but “we are punching above our weight.”

Former New York Mayor Mike Bloomberg, whose standing is rising in national polls, skipped Iowa and also planned to sit out the next three nominating contests, instead focusing his energy on California and the 13 other “Super Tuesday” states, and beyond.

Next up on the calendar is New Hampshire’s primary, scheduled for Feb. 11. Sanders leads in polls for that contest, according to RealClearPolitics.