Home
Stocks
Capitol Report: ISM says manufacturers grow for first time in 6 months – but that was before coronavirus
Prev Article Next Article
This post was originally published on this site

U.S. manufacturers grew their businesses in January for the first time in six months.

The numbers: U.S. manufacturers grew their businesses in January for the first time in six month— but it remains to be seen if they can keep it up with the coronavirus disrupting the economy of China.

A closely followed survey by the Institute for Supply Management rose to 50.9% last month to 47.8%, topping the key 50% threshold for the first time since July. Readings over 50% indicate more companies are expanding instead of shrinking.

Economists surveyed by MarketWatch had forecast the index to come in at 48.5%. 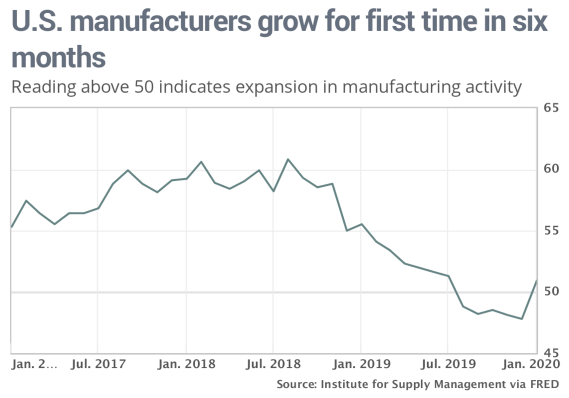 Manufacturers suffered a letdown last year after the U.S. trade war with China and a global economic slowdown reduced exports and spurred companies to tighten the lease on the spending and investment.

Lately, there has been some signs of a rebound, but the spread of the coronavirus could dissipate any of the benefits from a temporary trade truce between the U.S. and China.

What happened: A gauge measuring new orders jumped 4.4 points to 52%, also the highest reading since last July. Production turned positive again, though employment is still contracting in part due to a shortage of skilled labor.

The rebound wasn’t very broad-based, either. Only eight of the 18 industries tracked by the ISM were expanding. Eight contracted again and two saw basically no change.

“Business has picked up considerably. Many of our suppliers are working at or above full capacity,” a senior executive at a computer company told ISM.

Yet another executive at a maker of machinery said “the lack of faith in the economy seems to be why we cannot sell capital projects.”

What they are saying? “Most of the responses were likely filled out before the Wuhan virus began to have a substantial impact,” said chief economist Stephen Stanley of Amherst Pierpont Securities. “so it remains to be seen whether the U.S. manufacturing sector will take yet another China-related hit over the next few months.”

Big picture: Manufacturers have been heartened by easing trade tensions with China and the signing of a new trade deal with the Mexico and Canada that replaces the old North American Free Trade Agreement.

While trade disputes are still a hindrance, ISM survey panel chairman Timothy Fiore said, “many respondents were positive for the first time in several months.”

Yet the coast is far from clear, especially with the spread of the coronavirus causing nations to close themselves off to China. China is the world’s largest manufacturing hub and the second biggest economy in the world.

The U.S. isn’t immune. Some economists predict the damage from the virus could be significant in the first quarter, cutting as much as 0.5 percentage points off U.S. growth.

Market reaction: The Dow Jones Industrial Average DJIA, +0.73% and S&P 500 SPX, +0.87% rose in early Monday trades. Stocks had been trading at record highs last month before the spread of the coronavirus in China sent them plunging. Lately they have been bouncing up and down.