Home
Stocks
Capitol Report: Senate races to strike coronavirus stimulus deal as Mnuchin says it needs to get done ‘today’
Prev Article Next Article
This post was originally published on this site 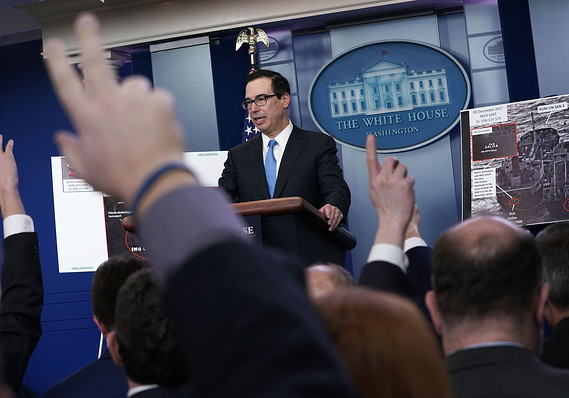 Senate lawmakers are racing to finish a massive aid package to help Americans devastated by the coronavirus, as Treasury Secretary Steven Mnuchin said it needed to be completed “today.”

Senate Majority Leader Mitch McConnell scheduled a fresh vote for Monday afternoon. Democrats led by Sen. Chuck Schumer indicated they would not vote to advance the current bill and instead said negotiations with the Trump administration were ongoing.

“We hope and expect to conclude negotiations today,” Schumer said.

“I think we’re very close. We need to get this deal done today,” Mnuchin told CNBC.

A test vote on the massive aid package failed Sunday night in the Senate. The final bill could end up close to $2 trillion, Mnuchin said.

‘We need to get this deal done today.’

Democrats like Sen. Elizabeth Warren said Republicans were trying to advance a bill that “would be great for giant corporations and leave everyone else behind.”

Democrats want to add provisions such as expanding unemployment insurance to four months at 100% pay and boost aid to hospitals. Republicans sought to provide $500 billion for the Treasury to make loans or investments to support businesses.

U.S. stocks fell on Monday with the Dow Jones Industrial Average DJIA, -1.81% off about 400 points, even after the Federal Reserve announced it would purchase an unlimited amount of Treasurys and mortgage-backed securities in order to support the financial markets.