Home
Stocks
Capitol Report: South Carolina primary could ‘change the narrative’ for Biden ahead of Super Tuesday
Prev Article Next Article
This post was originally published on this site 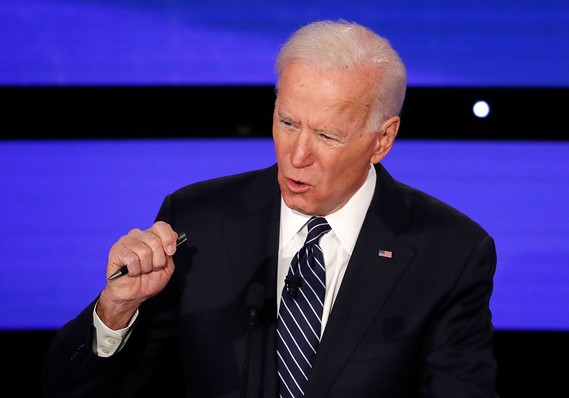 Joe Biden leads in South Carolina polls, and could ‘re-define’ himself with a strong performance in Saturday’s primary, analysts say.

The former vice president leads in polls going into Saturday’s primary, topping nearest competitor Sanders by about 14 points, according to an average by RealClearPolitics. Tom Steyer, the billionaire businessman who has poured millions of dollars into hiring staffers and running ads in the state, is in third.

South Carolina is the final primary before the 16 nominating contests on Super Tuesday, March 3, when about a third of delegates are at stake. With its diverse population, the Palmetto State will be a critical test for Biden, Sanders, Steyer and other candidates including Elizabeth Warren, Pete Buttigieg and Amy Klobuchar. Mike Bloomberg is not on the ballot in South Carolina and is banking on Super Tuesday to propel his campaign.

Read: Not one S&P 500 CEO is donating to Bernie Sanders or Elizabeth Warren.

“Biden has the most to gain in my view, as he is relying on a strong performance in South Carolina to change the narrative on his campaign and re-define himself as the moderate standard-bearer who can gain support from a diverse elector base,” said Brian Daingerfield of NatWest Markets, in an email to MarketWatch.

Sanders has a commanding lead in national polls ahead of Super Tuesday. Analysts at Beacon Policy Advisors say that the “best chance” of someone challenging the Vermont senator “is with a decisive South Carolina win by Biden that he can parlay into a relatively strong Super Tuesday.”

South Carolina offers 54 delegates of the 1,991 needed to win the Democratic nomination on the first ballot at the party’s convention in July. Sanders now leads in the delegate tally, followed by Buttigieg, Biden, Warren and Klobuchar, according to a tracker by NBC News.

Sanders also leads in polls of key Super Tuesday states, including California, North Carolina and Texas. In the latter two states he has only a small lead over Biden, however.

Now read: How Democrats could end up deadlocked on a presidential nominee for the first time in 68 years.

At Tuesday night’s Democratic debate in Charleston, Biden said he’d “earn” the vote of South Carolinians, including African-Americans, whose support he has long enjoyed. “I will win South Carolina,” he said.

The South Carolina primary comes as fears about the spread of the coronavirus epidemic from China has pummeled stocks SPX, -2.82%. But as MarketWatch reports, analysts also believe that the possibility of Sanders winning the nomination, and possibly the presidency, has contributed to jitters.

See: Is fear of a Sanders presidency bern-ing markets?

Brian Gardner of Keefe, Bruyette & Woods said in a note that markets DJIA, -2.89%   may rally on Monday if Biden wins Saturday’s primary, but he said he still views Sanders as the frontrunner on track to win a large lead in the delegate count after Super Tuesday.

President Donald Trump is scheduled to hold a “Keep America Great Again” rally in North Charleston, S.C., on Friday night. South Carolina’s Republican Party canceled this year’s presidential primary, one of a handful of states to do so.