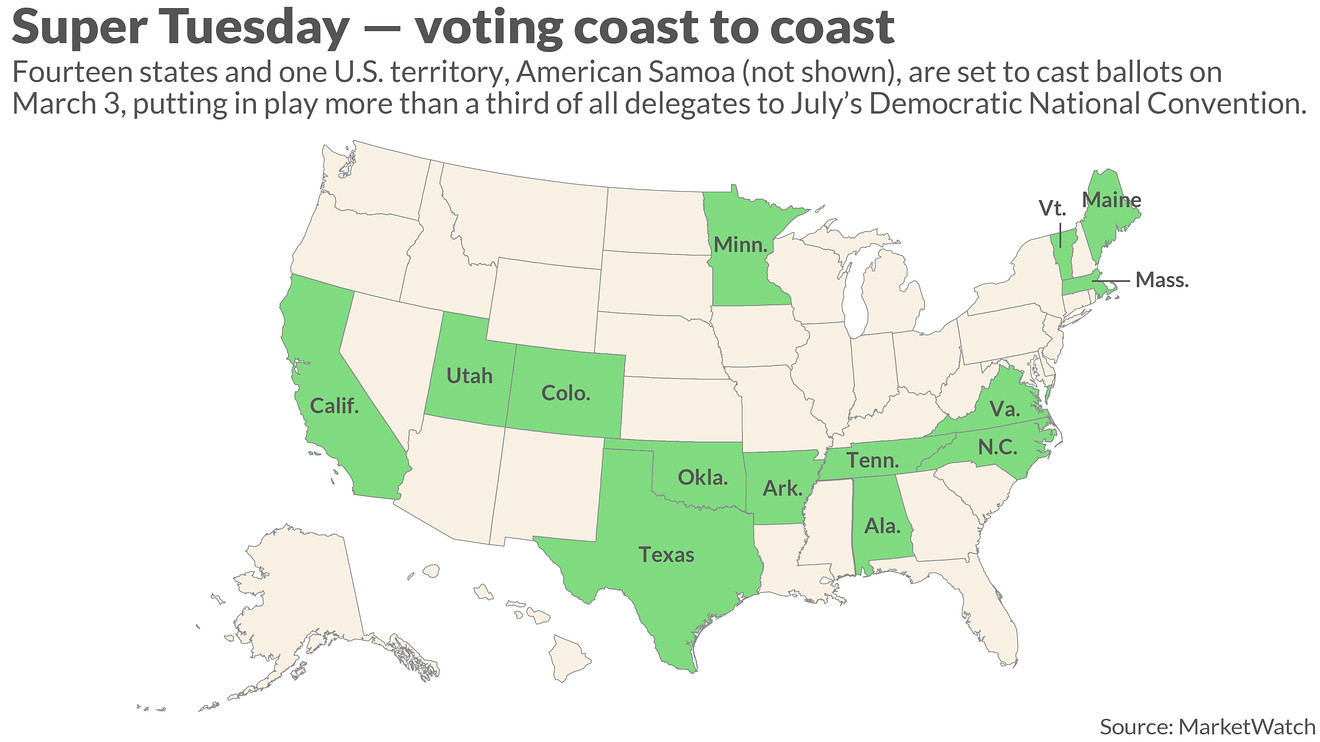 The battle to become the Democratic Party’s presidential nominee looks set to take a sizable step toward its resolution on Tuesday, as a huge number of delegates will get parceled out.

The Super Tuesday voting in 14 states and one U.S. territory is putting in play more than a third of the pledged delegates at July’s Democratic National Convention—1,357 out of 3,979.

Some pundits have been assuming front-runner Bernie Sanders, a democratic socialist, will win the party’s 2020 nomination, and that has led some investing strategists to at least partly pin the stock market’s SPX, +2.20% DJIA, +2.74% recent slide in part on fears of a Sanders presidency.

But there is still a window of opportunity for the more centrist Democrats competing against the Vermont senator, said Height Capital Markets analysts, though they also said it “will close quickly after Super Tuesday.”

“If they can keep Sanders below ~750 delegates and consolidate relatively quickly, a moderate could surpass Sanders,” the analysts wrote in a note last week, before some moderates dropped out of the race.

Following Saturday’s primary in South Carolina that former Vice President Joe Biden won decisively, Sanders has 60 delegates, according to an NBC News tracker, followed by Biden with 53 and Sen. Elizabeth Warren of Massachusetts with eight.

Former South Bend, Ind., Mayor Pete Buttigieg has 26, and Sen. Amy Klobuchar of Minnesota has seven, but they dropped out of the race on Sunday night and Monday, respectively. That has brought the field down to five contenders, as billionaire activist Tom Steyer exited Saturday night.

The other two remaining contenders—billionaire former New York City Mayor Mike Bloomberg and Rep. Tulsi Gabbard of Hawaii—haven’t picked up any delegates so far. Bloomberg, the last entrant and biggest spender in the Democratic race, is appearing on ballots in the 2020 primary contest for the first time on Super Tuesday.

Read more: South Carolina primary could ‘change the narrative’ for Biden ahead of Super Tuesday

The most delegate-rich states voting on Super Tuesday are California and Texas. Also holding primaries on Tuesday are Virginia, North Carolina, Massachusetts, Minnesota and eight states in the South, West or New England. American Samoa is due to join in the action as well, and voters who reside overseas will begin casting their ballots on Tuesday in the “Democrats Abroad” primary.

Sanders looks like a lock in his home state of Vermont and a solid favorite in California, Colorado, Utah and Maine, but Biden and Bloomberg could notch wins in Super Tuesday’s seven southern states, according to a FiveThirtyEight forecast. Sanders also has a strong chance of victory in Massachusetts, though it’s Warren’s home state.

“Some very cold water is is about to splash Biden tomorrow night in California,” said Greg Valliere, chief U.S. policy strategist at AGF Investments, in a note on Monday, as he added that a “Bernie blowout is likely in the Golden State.” Valliere said Sanders “will have a clear nationwide lead in delegates” by Wednesday morning, but there’s “still a narrow path” to victory for Biden, especially if Bloomberg drops out.

To secure the party’s nomination on the first ballot at the July 13-16 convention in Milwaukee, a Democratic contender will need to win at least 1,991 pledged delegates. Pundits have been speculating that for the first time since 1952, no Democratic politician will get to that magic number, so party insiders known as superdelegates could join in the process of picking the politician who will take on President Donald Trump in November’s general election.

The results in South Carolina suggest “an increasing likelihood of a contested convention in July,” said Nomura analysts in a note on Monday.