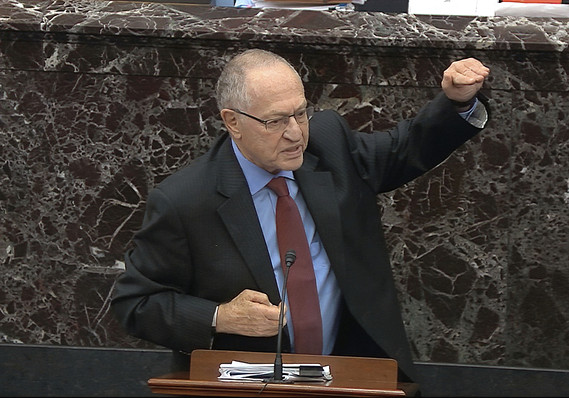 Alan Dershowitz, an attorney for President Donald Trump, answers a question during the impeachment trial in the Senate on Wednesday.

Senators were preparing Thursday for the second and final day of questions in President Donald Trump’s impeachment trial, as a vote on calling witnesses was expected Friday and Republican leaders eyed a quick verdict.

Senators have eight hours Thursday to ask more questions of both Democratic House managers and Trump’s lawyers, after lobbing more than 90 queries in Wednesday’s session. Up next will be a critical vote in which four Republicans would have to join Democrats to allow witnesses and documents.

Republicans are signaling they have the votes to block witnesses. The GOP could move to acquit Trump as soon as Friday evening, Sen. John Barrasso of Wyoming, the No. 3 Senate Republican, told NBC News on Wednesday.

Democrats say Trump abused his power by withholding aid to Ukraine in an effort to get that country to investigate former Vice President Joe Biden. They also charge that he obstructed lawmakers’ efforts to investigate the matter.

Trump denies wrongdoing and calls the impeachment effort a hoax. His lawyers began their defense on Saturday by charging that Democrats are trying to keep Trump from being reelected.

Read: ‘The president did absolutely nothing wrong’: Trump’s lawyers kick off impeachment defense.

A vote to hear from witnesses would prolong the trial. Trump, however, is expected to ultimately be acquitted since Republicans hold a 53-47 Senate majority. Convicting and removing him would take a two-thirds majority, or 67 senators.

U.S. stocks DJIA, -0.52%, which have largely ignored the impeachment drama from Washington, dropped at the open on Thursday, as the coronavirus epidemic stoked fears of a slowdown in Chinese and global economic growth.