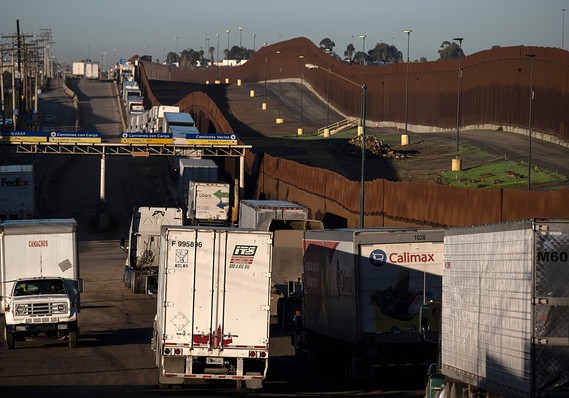 Trucks line up near the border fence to cross to the United States at Otay Commercial port of entry in Tijuana, Baja California state, Mexico, on Dec. 10, 2019.

The U.S. Senate on Thursday overwhelmingly approved the U.S.-Mexico-Canada Agreement, sending the pact to President Donald Trump for signature just a day after he inked a high-profile trade deal with China.

Approved just as the chamber is preparing for Trump’s impeachment trial, senators voted 89 to 10 to pass the deal, which replaces the North American Free Trade Agreement. Trump has repeatedly slammed NAFTA, blaming the 26-year-old pact for sending American jobs abroad, and had threatened to pull the U.S. out of that three-way agreement absent any changes.

The new deal makes changes to trading rules among the three countries. Among them are higher thresholds for how much of an automobile must be made in North America in order to trade vehicles duty-free; greater access to Canada’s dairy market; and easier unionization for Mexican workers.

USMCA got strong buy-in from Democrats after they won changes strengthening its labor, environmental and other provisions. Just one Republican, Pat Toomey of Pennsylvania, voted against it. The senator has charged that it will diminish trade.

Passage by the Senate on Thursday followed a 385-41 vote in the House of Representatives last month.

Before signing the China deal on Wednesday, Trump said the USMCA should be approved shortly and “we’ll talk about that next week.” Touting the China agreement on Twitter, the president said, “USMCA next!”

One of the greatest trade deals ever made! Also good for China and our long term relationship. 250 Billion Dollars will be coming back to our Country, and we are now in a great position for a Phase Two start. There has never been anything like this in U.S. history! USMCA NEXT!

Mexico has passed the USMCA but Canada must also ratify it for it to take effect. That could come in late January, when the House of Commons reconvenes.

The USMCA vote came as the Senate is gearing up for Trump’s impeachment trial and as voters are preparing for the start of the presidential primary election season. Sen. Bernie Sanders, who is No. 2 in an average of national surveys for the Democratic presidential nomination, voted against the deal. Fellow White House hopeful Sen. Elizabeth Warren backed it. Warren ranks third nationally, according to an average of polls by RealClearPolitics.