Home
Stocks
Caroline Baum: Stock market adopts a ‘what, me worry?’ attitude toward coronavirus threat
Prev Article Next Article
This post was originally published on this site 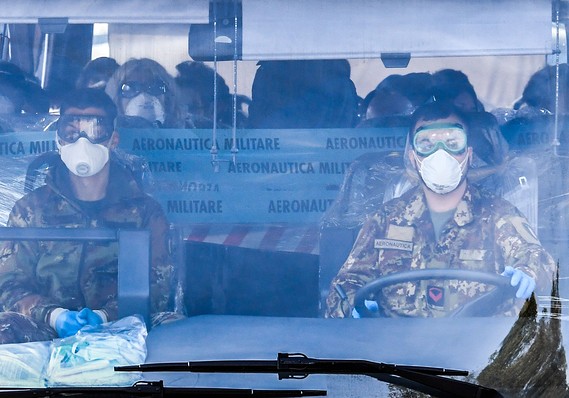 Italian citizens evacuated from Wuhan are driven in a military bus from a military airport near Rome to their quarantine center on Monday.

It was only last week that China’s rapidly spreading coronavirus was sending tremors through world financial markets. On Friday, the Dow Jones Industrial Average DJIA, +1.68%  plummeted 603 points, or 2.1%, its biggest one-day loss since August.

But by then, the U.S. stock market had moved on. Stocks rallied Monday, helped by signs that manufacturing was stabilizing, and soared on Tuesday, registering their biggest gain since August, with the Nasdaq Composite Index COMP, +0.43%  setting a new high. Stocks followed Tuesday’s gains with another strong performance on Wednesday, with the S&P 500 Index SPX, +1.13%  setting a record.

With the list of reasons to fear the spillover effects of the coronavirus on the global economy getting longer by the day, the stock market seems to be saying, all’s right with the world.

Not so fast. The stock market is often seen as a stand-in for the economy — or a leading indicator of what’s to come — but at times it has gotten ahead of itself. Some caution is advised.

For starters, stocks are not cheap. The forward 12-month price/earnings ratio for the Standard & Poor’s 500 Index is 18.4, above the five- and 10-year average, according to FactSet.

It is even more expensive based other metrics, such as Robert Shiller’s cyclically adjusted P/E ratio.

Each day brings new concerns about the repercussions from the rapidly spreading coronavirus, with about 25,000 confirmed cases and almost 500 deaths.

Businesses and factories in Wuhan, where the virus was believed to have originated in a live-animal market, and across China have been shuttered. World supply chains have been disrupted. Airlines have canceled flights to and from China. Entire areas have been quarantined. Hubei Province has been completely sealed off. Chinese authorities extended the Lunar New Year holiday for a week to restrict public movement. Consumers are on lock down at home.

Even casinos in the gambling mecca of Macau were ordered to shut their doors for at least two weeks. And on Tuesday, after shutting half its stores in China, Nike Inc. NKE, -0.83%   became the first big consumer company to warn of the impact of the virus on its business.

Under the circumstances, China may be hard-pressed to meet its pledge to buy an additional $200 billion of U.S. goods over the next two years, which was part of the phase-one trade deal.

Economists at Standard Chartered expect the effect of the virus to cut China’s first-quarter real gross domestic product growth from 6% to 4.5%. In light of China’s important role in global manufacturing and trade, not to mention its increasingly large market for consumer goods, the spillover effect on the U.S. is likely to lower real GDP in the first quarter by 0.4 to 0.5 percentage point, to be mostly made up in subsequent quarters, according to Goldman Sachs economists.

On the good news front, the Institute for Supply Management’s purchasing managers index rose above 50 in January for the first time since July. A reading of 50 above suggests manufacturing activity is expanding. The index for new orders, new export orders and production all showed sizeable jumps.

At the same time, the global manufacturing PMI, produced by IHS Markit, rose to a nine-month high of 50.4 last month, just above the dividing line between expansion and contraction.

In both cases, responses to the surveys don’t adequately reflect the latest news on the rapid spread of the coronavirus, which last week was declared a public health emergency of international concern by the World Health Organization.

When stocks were slumping last week, the bond market added to the concern with a warning of its own. The yield curve, or the spread between the policy rate and long-term Treasury yield, was flirting with inversion again, which, if it were to deepen and persist, would be a recession omen, with a long lead time.

The stock market’s rebound has sent bonds into retreat, steepening the curve for now. Still, the odds of a rate cut this year have increased from a month ago — although the probability has been pared in light of the stock market’s feel-good attitude this week.

Financial markets aren’t epidemiologists, so they can only guess at the extent and magnitude of the virus and whether it will be labeled a pandemic. So far, most of the cases and almost all of the deaths have been confined to China.

You would never know from looking at the stock market that such a threat is real. At times, U.S. stocks seem to behave less like risk assets and more like a safe haven. While the first response on bad news is to sell, on reflection the second impulse is to buy.

Perhaps that owes to the embedded belief that the Federal Reserve will do whatever it takes to rescue the economy from any untoward effects of the coronavirus.

Then there’s the fact that the U.S. economy has outperformed much of the developed world since the Great Recession, increasing the appeal of its stock market.

Still, trend-like growth of 2% isn’t that great with a possible pandemic staring you in the face. The trade war is far from over, with President Donald Trump cooking up new and different ways to penalize other countries.

A new Commerce Department rule will allow companies to pursue tariffs on overseas competitors for what they perceive to be currency manipulation.

Despite the trade truce with China, the U.S. still has tariffs on some $360 billion of its imports.

This is all happening at a time when business investment in the U.S. has contracted for three consecutive quarters: something that last occurred during the Great Recession. And while the U.S. consumer carried the economy last year, the three-legged stool is starting to look wobbly.

Then again, as some analysts have suggested, the stock market’s appeal may be nothing more complicated than what the acronyms suggest: FOMO, for fear of missing out; and TINA, for there is no alternative.

To that I would offer another acronym: SCIW, for some caution is warranted.