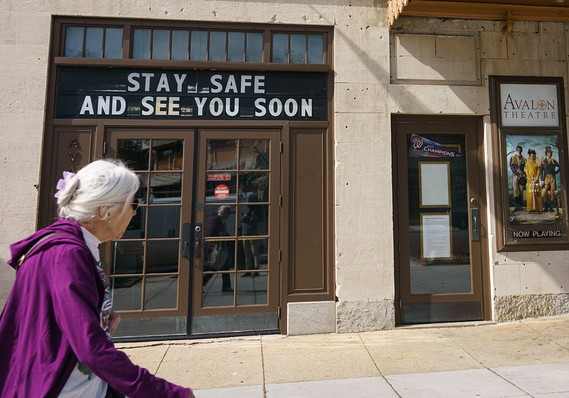 The historic Avalon Theatre in Washington has closed, along with a great many other small and medium-sized businesses.

The Trump administration has asked Congress for an additional $1 trillion in aid for American households and businesses on the heels of two fiscal stimulus measures already enacted.

But to think of these efforts, including free coronavirus testing, paid sick leave, expanded unemployment insurance, tax rebates to individuals and loans to distressed businesses, as stimulus is misplaced. They are essentially cash hand-outs, or bailouts, designed to keep consumers and businesses whole: a substitute for lost wages (households) and revenue (businesses) as entire swaths of the U.S. and world economy have been forced to shut down.

Government assistance over the next few months and perhaps beyond is a form of life support. This is not about Keynesian stimulus. The goal of “putting money in the pockets of those who will spend it” may be suited for a garden-variety recession, typically triggered when a central bank raises rates to slow a rapidly growing economy generating inflationary pressures and ends up overreaching.

But it is not appropriate to today’s circumstances. Right now, businesses and consumers need a life raft, plain and simple.

Also see: We’ll need to keep the vital organs of the economy alive while we hunker down waiting for the pandemic to end

This is anything but a garden-variety recession. The “D” word — depression — is even being bandied about.

On Thursday, the Labor Department reported that jobless claims rose 70,000 to a two-year high of 281,000. And this is just the beginning. Goldman Sachs economists expect this week’s claims, to be reported next Thursday, to rise to 2.25 million, which would be the largest increase and highest level on record.

Economists have come around to the view that a global recession is inevitable. J.P. Morgan economists expect the first half of 2020 to witness “the biggest quarterly contractions recorded over the past 50 years at least.”

Their forecast for China’s first-quarter real gross domestic product is for a 40% annualized decline. They expect an annualized 14% decline in U.S. real GDP in the second quarter of this year and an even greater 22% decline for the Eurozone.

The safety measures taken to limit the spread of the coronavirus — restricting travel, shuttering factories and businesses, closing bars and restaurants, cancelling sporting events, suspending classes at schools and universities — have caused severe damage to the economic health of the nation. And the worst is yet to come.

Also read: A small business struggles to open amid the coronavirus pandemic — ‘we have to focus on what’s in front of us’

We have created a nation of stay-at-home moms, dads and children. (At least the dogs are happy!) Yes, some of them are working remotely. But many have been laid off, furloughed or given part-time hours.

Treasury Secretary Steve Mnuchin, who is leading the stimulus effort for the Trump administration, is pushing for sending direct checks to individuals and loans to businesses.

But cutting checks may not be the most efficient or effective way to stabilize the economy. In a Wednesday column in the New York Times, Andrew Ross Sorkin argued for offering bridge loans to businesses, conditioned on keeping 90% of the workforce at their pre-crisis wage. The loans would be good for five years.

The program “would keep everyone employed,” Sorkin writes, and restore some confidence because having a job and a paycheck is a lot better than just having just a check. A scaled-back version of Sorkin’s idea is in the Mnuchin proposal.

And yes, it would cost trillions of dollars. But what is the alternative?

Even better, the program could be administered via the banks, which already have the contacts and infrastructure in place to reach the small business community.

Several economists have backed such a proposal, as have GOP Sens. Marco Rubio and Susan Collins.

The goal is to prevent a collapse in the economy, the effects of which could be worse than the Great Depression and 2008 financial crisis combined. Central banks across the globe have been aggressive in slashing interest rates, providing needed liquidity and expanding the types of collateral they will accept for emergency loans.

Just this week, the Federal Reserve instituted emergency lending facilities — some old, some new — to backstop the markets for commercial paper and money market mutual funds and offered additional liquidity to primary dealers, who deal directly with the Fed.

President Trump, in referring to what was until last month strong economic growth, a low rate of unemployment and a soaring stock, was fond of saying “there’s never been anything like it before.”

He may find that those words are more appropriate when applied to the economic fallout from the coronavirus.