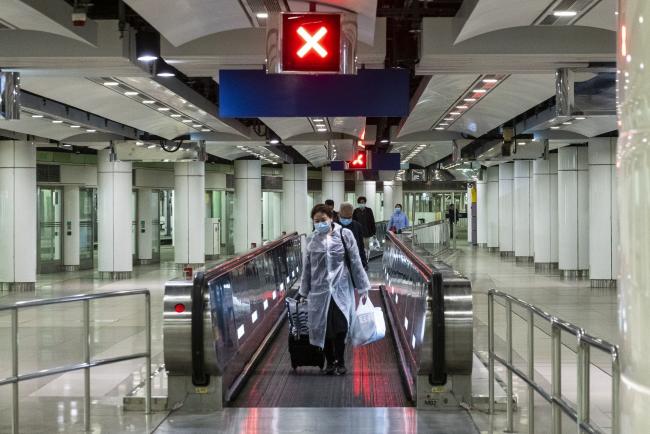 An “export boom” from the U.S. trade deal with China will be delayed because of the coronavirus outbreak, said White House economic adviser Larry Kudlow. More than 20,600 cases have now been reported, an increase from about 17,000 the previous day. The U.S. Securities and Exchange Commission warned the public about scams related to the virus.

The U.K. government asked its citizens to leave China, while Hong Kong reported a death from the coronavirus, confirming the second fatality outside the mainland.

Bloomberg is tracking the outbreak on the terminal and online.

At least one group appears to be benefiting from the coronavirus: financial fraudsters.

That’s according to the U.S. Securities and Exchange Commission, which is warning investors to be on the lookout for scams tied to the virus’s spread. The regulator said in a Tuesday statement that it’s become aware of a number of online promotions, including some on social media, that aim to attract investments in companies on the false premise that they can prevent, detect or cure infections.

“We urge investors to be wary of these promotions, and to be aware of the substantial potential for fraud at this time,” the SEC said.

Six hundred eighty-four people have recovered from coronavirus infections, according to Maria Van Kerkhove, an epidemiologist serving on the World Health Organization’s emergency committee. The death toll has climbed to at least 425, the group said Tuesday.

The UN agency plans to hold a research meeting on the virus next week, Director-General Tedros Adhanom Ghebreyesus said during a briefing in Geneva. The outbreak was declared an international public health emergency by the WHO last week.

The WHO estimated the cost of supporting member countries during the outbreak at $676 million.

Universities across the U.S. are moving to protect their students and faculty from the coronavirus outbreak. About 370,000 Chinese students attend college in the U.S., one third of all foreign students and more than any other country, according to the Institute of International Education.

Princeton University ordered some students who returned to campus from China to isolate themselves. The University of Southern (NYSE:) California suspended study abroad programs in the country. Trinity University brought back six students studying in China.

“You’d be hard pressed to find a major U.S. university that doesn’t have some form of engagement in China,” said Michael Schoenfeld, a spokesman for Duke University in Durham, North Carolina. “If you’re a global institution and you’re not prepared for something of this scale, you’re going to have to get there.”

The “export boom” from the U.S.’s trade deal with China will be delayed because of the coronavirus outbreak, but the economic impact “is going to be minimal,” White House economic adviser Larry Kudlow said.

“It’s not a catastrophe, it’s not a disaster — we’ve been through this before. I think the impact is going to be minimal,” Kudlow said on Fox Business Tuesday. “It’s going to be much tougher for China.”

Last week, Kudlow said the U.S. hasn’t seen any major effects on its economy from the coronavirus epidemic, and will refrain from using it as leverage in the second phase of China trade talks.

Hong Kong’s Jockey Club shut all 101 off-site betting branches indefinitely. The club is “critically considering a further reduction of on-site participation by our customers starting from this Saturday.”

An internal analysis presented to OPEC and its allies estimated a reduction in average global oil demand growth of 200,000 barrels a day this year in the worst-case scenario for the spread of the coronavirus. BP (LON:) said earlier that the outbreak is threatening to wipe out 300-500,000 barrels of daily demand.

Foreign Secretary Dominic Raab told all Britons “who are able to leave China to do so.” The government is advising against “all but essential” travel to the mainland.

A Chinese woman who touched off a cluster of coronavirus cases in Germany last month was experiencing symptoms during her visit, according to health officials in Berlin. This information differs from a paper published in the New England Journal of Medicine, which stated that the woman appeared to have transmitted the virus while still in the incubation phase

OPEC+ consulted with a Chinese ambassador as it conducted an urgent assessment of how the coronavirus may hurt oil demand, and what measures the group could take in response. Earlier on Tuesday, BP warned the outbreak could wipe out a third of global oil-demand growth this year.

Indonesia scrapped a plan to ban all Chinese food imports to prevent the spread of the coronavirus after Beijing warned of the “negative impact” of such measures on investment and the economy. The government will only prohibit the entry of live animals from China, while shipments of food including garlic and fruits will continue as usual.

The WHO said the coronavirus hasn’t shown much mutation yet or caused a pandemic, with the strategy still to extinguish transmission. There are unknowns that remain about the virus and the agency expects to be able to give a better estimate of the severity of the disease in coming days, the WHO’s Sylvie Briand said at a briefing in Geneva.

The U.S. had said earlier it’s preparing for a possible pandemic.

Hong Kong-listed companies were given flexibility to report earnings with an upcoming end of March deadline. Companies having trouble moving personnel and auditors across mainland China and Hong Kong have been asked to report this as soon as possible.

Chinese firms’ purchase of U.S. goods will be delayed in the first quarter, but they can increase purchases later this year as the obligation is measured annually, Global Times reported, citing a researcher closely associated with the talks.

The airline plans to reduce operations across its entire network over the next two months. The coronavirus outbreak is taking a heavy toll on the carrier already battered by anti-government protests in Hong Kong. The total impact across Cathay’s network will be a reduction of about 30% in capacity.

Four cases that involve human-to-human transmission of novel coronavirus infection in Singapore were among the six additional cases confirmed, according to a statement by the health ministry on Tuesday.

The Vietnamese prime minister has ordered officials to quarantine anyone who entered the country from China over the last two weeks. The government has already suspended the issuance of tourist visas to Chinese nationals and other foreigners seeking to visit from China.

Total confirmed count has now risen to 25, with 17 in hospital. This includes a 70-year-old who is in a “serious” condition. Thailand now has the most number of confirmed cases outside China.

Hong Kong retail sales tumbled for an 11th month in December. The economy, which was already reeling from months of anti-government protests, now faces the prospect of disruption from the virus outbreak.

Bank of Japan Governor Haruhiko Kuroda said the bank won’t hesitate to take action to cope with the virus’s economic impact if necessary. His remarks contrasted with comments last month when he said it was too early to assume the outbreak would pose as big a threat as the 2003 SARS contagion.

A 39-year-old male who was infected with the novel coronavirus died Tuesday morning at Princess Margaret Hospital in Hong Kong, a Hospital Authority spokesman said by phone.

The fatality marks the first in Hong Kong, and the second death outside of mainland China. A 44-year-old Chinese male from Wuhan died in the Philippines on Feb. 1. Hong Kong has 15 confirmed cases of the coronavirus.

The man in Hong Kong, who had an underlying illness, hadn’t visited any health-care facilities, wet or seafood markets, and had no exposure to wild animals during the incubation period, according to a government statement on Jan. 31.

Zhang Qin, vice head of the Hubei government-linked Red Cross society, was removed from his position for violations in receiving and distributing donations and faulty information disclosure, according to the local discipline commission.

Two other Red Cross officials were also punished, according to a statement.

The government has vowed to punish officials who delay or fail to disclose virus information. The ruling Communist Party is anxious to avoid a repeat of SARS, during which it was criticized for initially covering up the scale of the problem.

The outbreak of the coronavirus and China’s efforts to stop the spread mean the economy will grow slower this quarter than first thought, according to economists.

Meanwhile, China’s car sales are likely to slump the most on record in the first two months of 2020 as the coronavirus keeps buyers away from showrooms. Sales are set to fall by 25% to 30% in the period, according to a preliminary forecast by Cui Dongshu, secretary general of China Passenger Car Association.

Shares of casino operators slumped as Macau asked them to temporarily close in a bid to contain the spread of the coronavirus. The request to shut down the world’s largest gaming hub for half a month would be the latest blow to the gambling mecca that’s been struggling to recover from the worst annual revenue decline since 2015.

The proposal needs to be discussed with the industry, Macau Chief Executive Ho Iat-seng said in a briefing. He added that the city would be able to afford the economic cost. This would be the first time casinos have closed since a typhoon in 2018. A Bloomberg Intelligence index of Macau gaming shares dropped as much as 3.7%.

Hyundai Motor Co. is halting production in South Korea this week because of a component shortage caused by the coronavirus, the first global automaker to suspend output outside China because of the outbreak.

The carmaker has been hit by a shortage of a wiring component made by a Chinese supplier, whose operations have been halted after a worker was infected by the virus, Hyundai Motor’s labor union said. Production may resume from Feb. 11 or Feb. 12, a spokesman for the union said by phone. A company spokesman confirmed the suspension without giving details.

Chinese President Xi Jinping called on all officials to quickly work together to contain the coronavirus at a rare meeting of top leaders, saying the outcome would directly impact social stability in the country.

The effort to contain the virus directly affects people’s health, China’s economic and social stability, and the country’s process of opening up, he told a meeting of the Communist Party’s powerful Politburo Standing Committee on Monday. Leaders also urged officials “to achieve the targets of economic and social development this year” and “promote stable consumer spending.”

Carnival (NYSE:) Corp.’s Princess Cruises said it will delay disembarking passengers on board a ship in Japan by as much as 24 more hours, after a passenger tested positive for coronavirus on Feb. 1.

Japan’s health authority is currently testing the health of the 2,666 passengers and 1,045 crew.

The Diamond Princess cruise ship arrived in Yokohama Monday morning after 16 days of sailing. On Saturday, the passenger, who was from Hong Kong, tested positive for coronavirus at a local hospital there, according to Princess Cruises.