Home
Market
China Inc thinks outside the box as coronavirus keeps consumers at home
Prev Article Next Article
This post was originally published on this sitehttps://i-invdn-com.akamaized.net/trkd-images/LYNXMPEG210SL_L.jpg 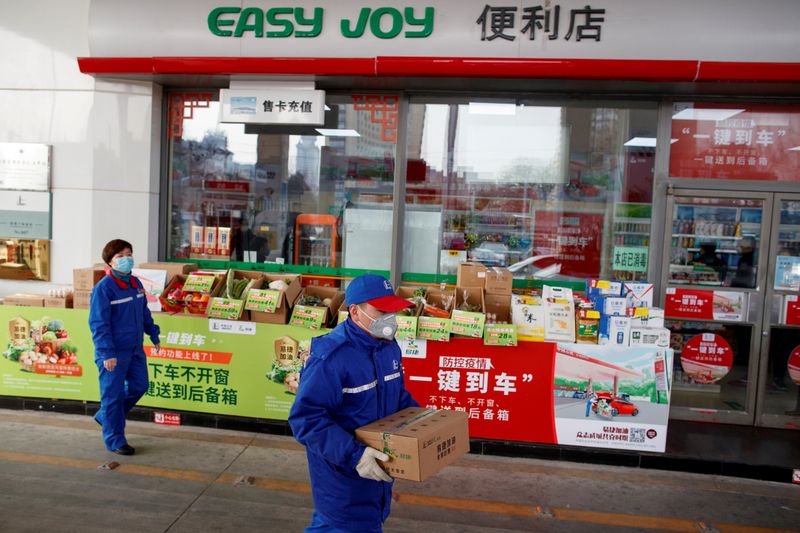 © Reuters. FILE PHOTO: A pump attendant carries a box of groceriees into a car at a Sinopec gas station in Beijing where customers can buy supplies while they refuel

BEIJING (Reuters) – With Chinese consumers hit by quarantine and travel restrictions as well as just wary about venturing out to the shops due to the coronavirus epidemic, companies in the world’s most populous nation are experimenting with new tricks to make sales.

Oil giant Sinopec (SS:) – keen to get customers back in their cars and help farmers unable to deliver produce due to roadblocks – launched a new scheme last month called “zero-touch” vegetable sales at its 6,000 gas stations in 147 Chinese cities.

Consumers place and pay for orders on the Sinopec mobile app and when they drive up, gas station attendants put the vegetables into their car trunk, eliminating any need for human-to-human contact.

“The coronavirus outbreak has made it difficult for people to shop as before,” said Li Hong, vice president of Sinopec’s convenience store sales division. “Travel demand has been falling, but demand for food is pretty rigid.”

Mengniu Dairy (HK:), China’s second largest dairy producer, is racing to add more vending machines to the 10,000 it currently has, saying the epidemic has driven unexpectedly strong demand for the sales channel.

Its system allows customers to order products like milk and yoghurt online which can then be picked up from their local vending machine.

“The virus outbreak has curbed consumption for dairy products as people are unwilling to go to the supermarket,” said Meng Fanjie, head of the company’s Communist Party committee.

The company has also introduced a ‘community wholesale’ initiative, making bulk deliveries to housing compounds and other communities so that the people living there do not need to venture too far out.

“The new retail measures…have helped to bring back some sales and given us bigger market share,” he said, adding that sales as of Feb. 27 had returned to 80% of levels seen in January.

Luckin Coffee (O:), a domestic rival to Starbucks (O:), now also offers deliveries of alcohol-based sterilizers and antibiotic hand soap in addition to caffeinated beverages. It is also stocking its network of vending machines, launched this year, with the sanitizer products.

Liu Xingliang, an independent retail analyst, said, however, that he thought Luckin’s strategy would have only a modest impact. “At best some users will place an order when they buy coffee but nobody is deliberately choosing the Luckin app just to buy sanitizer.”