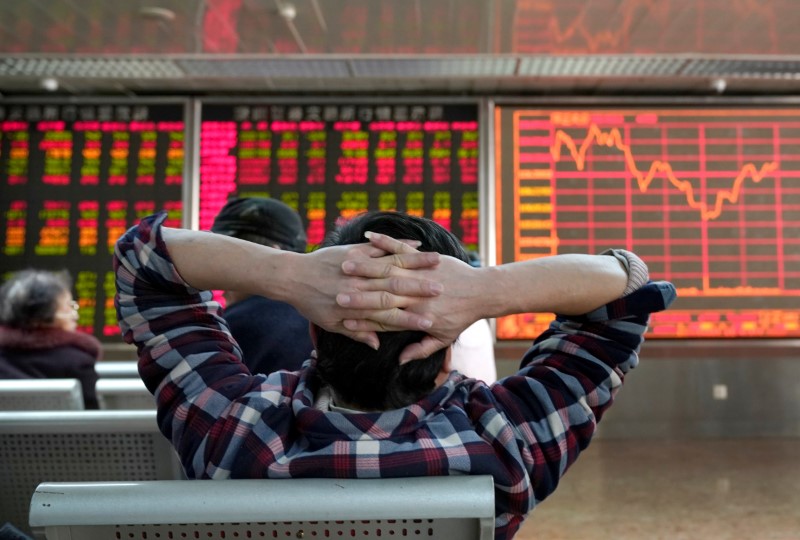 © Reuters. An investor looks at a stock quotation board at a brokerage office in Beijing

SINGAPORE (Reuters) – Asian stock markets bounced on Wednesday as China’s response to a virus outbreak tempered fears of a global pandemic, although Shanghai shares slipped amid worries about a hit to domestic demand and tourism.

The outbreak has revived memories of the Severe Acute Respiratory Syndrome (SARS) epidemic in 2002-03, a coronavirus outbreak that killed nearly 800 people and hurt world travel.

Yet this time, China’s response and candor – in contrast to the initial cover-up of the SARS outbreak – has tempered some of the gravest fears about the possible global fallout.

China’s National Health Commission said on Wednesday there were 440 cases of the new virus, with nine deaths so far. Measures are now in place to minimize public gatherings in the most-affected regions.

The Shanghai Composite index () recovered from an early 1.4% drop to trade 0.5% lower by mid-morning. Markets elsewhere advanced, driving the MSCI index of Asia-Pacific shares outside Japan () up 0.5%.

Japan’s Nikkei (), Korea’s Kospi index () and Hong Kong’s Hang Seng () all rose by more than half a percentage point after heavy drops on Tuesday. Australia’s S&P/ASX 200 () shrugged off worries to hit a fresh record high.

“The call here is not that the virus is done or nipped in the bud by any means,” said Kay Van-Petersen, global macro strategist at Saxo Capital Markets.

“But there have been no big further reported outbreaks, and the response from the Chinese authorities has been very, very positive…China is 1.4 billion people. This is not the first time they’re tackling a bug that’s gotten out of hand.”

The outbreak, from its origin in Wuhan, China, has reached the United States, Thailand, South Korea, Japan and Taiwan.

Cases have been confirmed in 13 Chinese provinces.

The World Health Organization (WHO) meets later on Wednesday to consider whether the outbreak is an international emergency.

Airlines, other travel-exposed stocks and retailers vulnerable to shifts in consumer sentiment have borne the brunt of selling in the past two days along with the .

MSCI’s airline industry index <.dMIWO0AL00P> posted its biggest daily drop in more than three months on Tuesday and shares in the industry were still falling on Wednesday.

On Wall Street overnight, the Dow Jones Industrial Average () fell half a percent and the S&P 500 () dropped almost a third of a percentage point, led by falls in airlines and China-exposed casino operators.

“While details on the coronavirus are scant, we reckon that the SARS period could offer some clues as to how markets could pan out,” said analysts at Singapore’s DBS Bank.

“The trends are clear: Yields and stock prices fell in the first few months of the SARS outbreak and rebounded thereafter.”

In currencies, the safe-haven yen eased slightly from the one-week high it touched overnight, although the yuan nursed its losses. It was steady at 6.9026 per dollar .

Oil prices also settled back as traders figured a well-supplied global market would be able to absorb disruptions that have cut Libya’s crude production to a trickle.