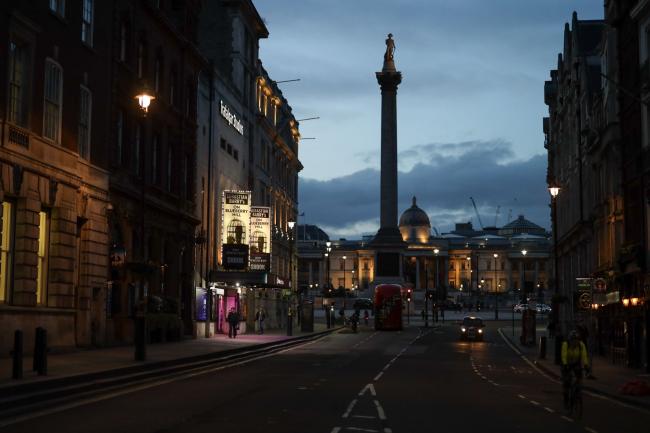 Click VRUS on the terminal for news and data on the coronavirus and here for maps and charts. For analysis of the impact from Bloomberg Economics, click here. To see the impact on oil and commodities demand, click here.

Coronavirus cases in Australia from a single infected cruise ship exploded, highlighting again the dangers the vessels pose to governments fighting the spread of the virus.

The number of infections from the Ruby Princess, which docked in Sydney on March 19, has reached 133, Australian health authorities said. One woman in her 70s has died. The ship accounts for 7.3% of all cases in the country, where infections are soaring.

The Princess Cruises-operated vessel is just the latest cruiseliner to become a hotbed for the virus. More than 700 people were infected on another Princess Cruises-run vessel off Japan in the early days of the outbreak.

European airports will lose more than 700 million passengers in 2020, resulting in a 14 billion euro ($15 billion) hit to revenue for airport operators, according to industry groups.

The forecast is based on travel restrictions being lifted toward the end of April and demand gradually recovering, associations representing airports, caterers, retailers and ground handlers wrote in a joint letter to the European Commission. The financial hit is for airport operators alone, and doesn’t take into account “the massive losses that the other service providers at airports will inevitably incur.”

China’s Hubei province said it will allow transportation to resume for the city of Wuhan on April 8, effectively lifting a mass quarantine over the city where the coronavirus first emerged last December.

People in Wuhan will be allowed to leave the city and Hubei province, according to a statement on the provincial government’s website Tuesday.

The easing of restrictions comes as Hubei reported that new infections dropped to zero on March 19, a dramatic plunge from the height of an epidemic that’s infected more than 80,000 Chinese and killed over 3,200.

Thailand said confirmed coronavirus infections jumped by 106 to 827, and three more people died. Cases have surged this month, leading to a partial shutdown of much of the country, including in Bangkok.

Many of the new cases are linked to clusters from a boxing stadium event, foreign travel and the tourism and service industries. Four involve health- care workers.

The latest fatalities take the death toll to four, Taweesilp Witsanuyotin, a spokesman for the Health Ministry, said in a briefing.

Southwest Airlines (NYSE:LUV) Co. will scrub 1,500 flights from its daily schedule, 500 more than planned just days ago, because it is only filling about 20% of seats on its planes as the coronavirus slams demand. Southwest’s rapid escalation reflects the severity of the drop in travel demand that has impacted airlines around the world. The four largest U.S. airlines had cut about 5,000 flights by midday Monday.

The New York metropolitan area, the center of the outbreak in the U.S., has a higher infection rate than in the rest of the country and a greater share of tests that come out positive, said Deborah Birx, a member of the Trump administration’s coronavirus task force. The attack rate in the region is close to one in 1,000, five times what other areas are seeing, Birx said a Trump press briefing. About 28% of the submitted tests are positive, compared with less than 8% in the rest of the country, she said.

“Clearly the virus had been circulating there for a number of weeks to have this level of penetrance into the general community,” Birx said.

U.S. regulators have lifted import restrictions on an Indian pharmaceutical company in an effort to increase supplies of a malaria drug touted by President Donald Trump as a potential coronavirus treatment.

Mumbai-based Ipca Laboratories Ltd. said in a March 21 securities filing that the U.S. Food and Drug Administration “has made exception to the import alert” for three of its facilities, allowing it to supply tablets as well as raw materials for making chloroquine phosphate and hydroxychloroquine sulphate.

The U.S. is facing possible shortages of both drugs, which are also widely prescribed to treat rheumatoid arthritis and lupus. Hospitals have been stocking up on the treatments in recent weeks following reports from doctors outside the U.S. that they were effective against Covid-19, the disease caused by the novel coronavirus. There have been no large-scale clinical trials to support those claims.

Washington State Governor Jay Inslee issued a stay-at-home order that begins in 48 hours and will be in force for at least two weeks. The order bans all gatherings and shutters non-essential businesses. Grocery and pharmacy shopping, doctor appointments and restaurant takeout will still be allowed.

The actions come on a day in which Seattle and King County announced 12 fatalities, the largest single-day death toll yet in that area, and Boeing (NYSE:BA) shut down in-state production after a worker at its Everett plant died of Covid-19 yesterday. There are 2,221 confirmed cases of Covid-19 in Washington State, according to the Department of Health, and 110 deaths.

The step follows similar actions by New York and California, but also by states that have fewer infections than Washington such as Oregon and West Virginia.

China reported 78 additional coronavirus cases for March 23, with 74 of them from abroad, according to statement from the country’s National Health Commission. The other four, including one from Wuhan, are locally reported cases.

China now has 81,171 total confirmed coronavirus cases. The nation’s death toll rose by seven to 3,277. All the latest fatalities are from Hubei. Discharged patients rose by 456 to 73,159.

President Donald Trump said first lady Melania Trump had tested negative for the coronavirus. The president was asked if she was tested since both he and Vice President Mike Pence tested negative. Trump did not say whether the first lady had symptoms of the disease or had a known contact with someone who had the virus.

Amazon.com Inc (NASDAQ:AMZN). said it has suspended thousands of seller accounts for price gouging during the coronavirus pandemic. The operator of the largest U.S. online marketplace said it has pulled well over half a million offers and suspended more than 3,900 selling accounts in the U.S. for violating its fair pricing policies.

U.S. President Donald Trump said Boeing Co . will need government “help” amid the economic slowdown stemming from the coronavirus crisis that has hit the travel industry.

“Boeing’s going to need some help,” Trump said at a White House news conference. “Obviously the airlines are going to have a problem, but the airlines aren’t going to be buying from Boeing or anybody else right now because of this difficulty.”

The planemaker announced Monday that it is shutting its Seattle-area manufacturing hub for two weeks after a worker died of coronavirus complications, adding to a wave of plant closings sweeping the globe as the aviation industry navigates the biggest disruption in decades.

Anheuser-Busch InBev NV, the world’s largest brewer, withdrew its 2020 outlook. The company cited the uncertainty, volatility and fast-moving developments of the coronavirus pandemic in markets where it operates, according to an emailed statement.

In February, AB InBev cut its chief executive’s bonus and forecast the steepest decline in quarterly profit in at least a decade as the coronavirus damps barhopping.

President Donald Trump said the U.S. economy can’t remain slowed for long to fight the coronavirus, declaring the country “was not built to be shut down.”

“America will again and soon be open for business. Very soon,” Trump said at a news conference. “A lot sooner than three or four months.”

The president also said he was delaying the Oct. 1 deadline for Americans to get a REAL ID. The identification will eventually be required to board a domestic flight in the United States.

Florida Governor Ron DeSantis said he will issue an executive order making it mandatory for all arrivals from New York and New Jersey to self-isolate for two weeks upon entering the state.

The Centers for Medicare and Medicaid Services is considering reopening enrollment for health insurance under the Affordable Care Act in response to the outbreak. Americans who don’t currently have coverage may see if they qualify for “special enrollment periods” if they’ve lost their job or have been subject to other life-changing circumstances, a CMS spokesperson said.

CMS is working closely with the states and health plans to assess other necessary actions to ensure Americans have coverage and access to services during the pandemic, the spokesperson said.

U.K. Prime Minister Boris Johnson approved radical measures to ban all unnecessary movement of people for at least three weeks. Police will break up gatherings and have the power to fine individuals who break the tough new laws. Shops selling non-essential items, playgrounds, libraries and places of worship will be closed.

The main showroom of the center will be broken up into four 250-bed hospitals each about 40,000 square feet in size, Cuomo said at the center. The state is hoping to add an additional 1,000 beds at the center for less-intensive medical care, for a total of 2,000 new beds, Cuomo said.

As deaths climbed almost 30% in France, Health Minister Olivier Veran said the government recommends against prescribing the anti-malaria drug hydroxychloroquine or using it for anything other than severe cases. France is participating in a multi-country study looking at the efficacy of four experimental treatments, including hydroxychloroquine.

Italy reported 601 new deaths from the coronavirus on Monday, posting a decline for a second day, as the country enters its third week of lockdown measures designed to keep the spread of the disease in check.

Total cases in the country rose to 63,927, civil protection officials said, while the hard-hit Lombardy region around Milan, which accounts for about half of the nation’s infections, registered a decrease in the number of hospitalized virus patients, top health official Giulio Gallera said Monday.

The International Monetary Fund said it expects a global recession this year that will be at least as bad as the downturn during the financial crisis more than a decade ago, followed by a recovery in 2021.

German officials are ready to help Italy get through the coronavirus pandemic and are prepared to support an emergency loan from the euro area’s bailout fund.

The preferred option in Berlin would see Italy granted an enhanced credit line by the European Stability Mechanism with minimal conditionality, according to a German official with knowledge of the government’s thinking. While Chancellor Angela Merkel has said she’s happy to discuss Italy’s request for jointly issued coronavirus bonds to shore up euro members’ finances, the official said Germany isn’t ready to move forward with that idea.

Germany’s public health authority has seen a trend toward the exponential growth in new cases flattening out and expects to see by Wednesday whether this is the case, Lothar Wieler, president of the authority, said at a press conference earlier on Monday. “I am optimistic.”

RKI repeated that many local health agencies don’t report over the weekend and that those numbers will trickle in during the course of the week.

Moderna Inc.’s experimental vaccine for the new coronavirus could be available to a select few as soon as this fall. That’s ahead of expectations for a commercial launch in another year.

Stephane Bancel, the biotech’s chief executive, told Goldman Sachs (NYSE:GS) representatives on Friday that the vaccine could be made available to a few, potentially health-care workers under emergency-use authorization. Moderna has been working with the National Institute of Allergy and Infectious Diseases on the vaccine and just started testing in humans earlier this month.

A potential vaccine isn’t expected to be commercially available for at least a year. Moderna is also scaling up manufacturing so that the company can produce millions of doses each month, according to a company statement.