Home
Market
CN Rail to shut down Eastern Canadian operations due to protests
Prev Article Next Article
This post was originally published on this sitehttps://i-invdn-com.akamaized.net/trkd-images/LYNXMPEG1C1ZO_L.jpg 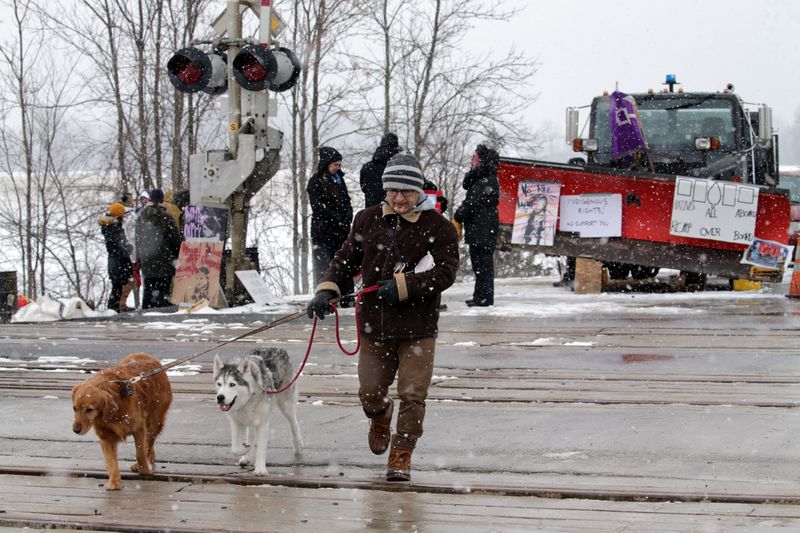 © Reuters. A man walks dogs across train tracks in Tyendinaga

(Reuters) – Canadian National Railway Co (TO:) will shut operations in Eastern Canada as its rail lines continue to be blocked by anti-pipeline protesters, the country’s biggest railroad operator said on Thursday.

The protests by an indigenous community opposing the construction of a gas pipeline project in British Columbia and its supporters have disrupted passenger trains and goods transportation for the seventh straight day.

The shutdown will continue until the blockades end and may lead to temporary layoffs within its Eastern Canadian operational staff, the company said.

“With over 400 trains canceled during the last week and new protests that emerged at strategic locations on our mainline, we have decided that a progressive shutdown of our Eastern Canadian operations is the responsible approach to take,” Chief Executive Officer JJ Ruest said in a statement.

The company’s national rail passenger service, VIA Rail also said it would cancel all of its services on the network, effective immediately.

“This is devastating news for the manufacturing sector which heavily relies on rail transportation and, the overall Canadian economy,” said Dennis Darby, President and CEO of Canadian Manufacturers & Exporters.

“My request, that I ask you kindly to consider, is to discontinue the protest and barricade of the train tracks as soon as practicable. As you well know, this is a highly volatile situation and the safety of all involved is of the utmost importance to me,” Miller said in an email to the Mohawks.

The C$6.6 billion ($4.97 billion) pipeline, which will be operated by TC Energy Corp (TO:), is set to move from northeastern British Columbia to the Pacific Coast, where the Royal Dutch Shell-led LNG Canada export facility is under construction.