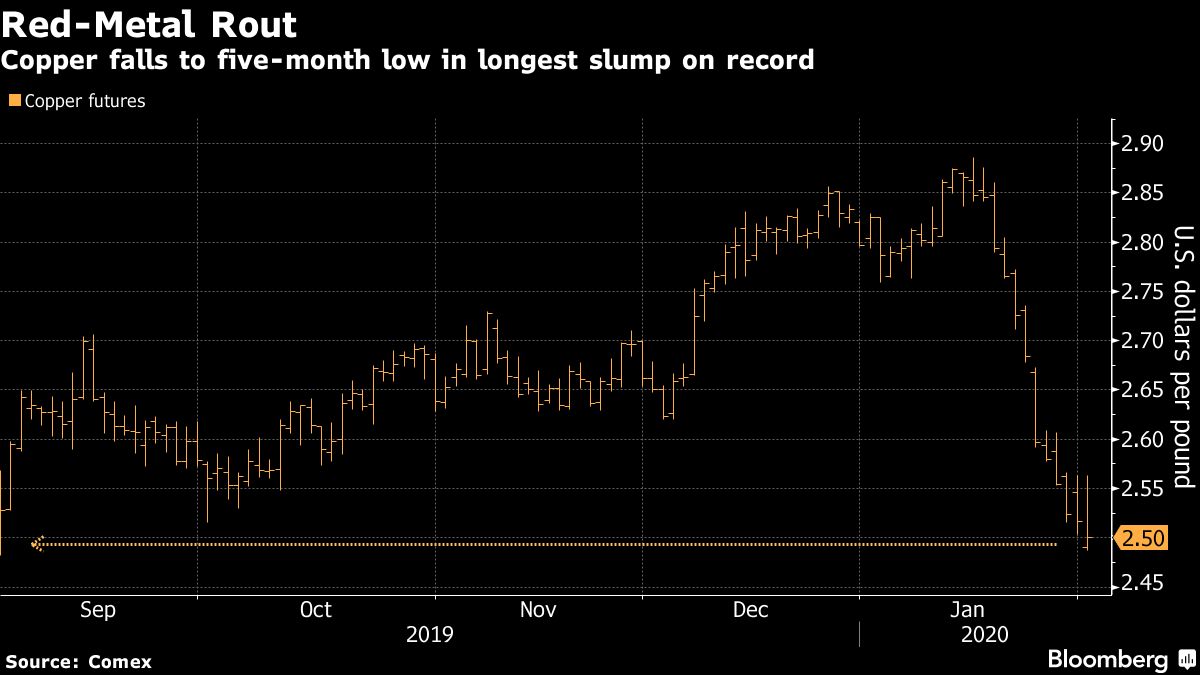 (Bloomberg) — fell to the lowest since September and extended a record slump amid concerns the coronavirus could undo the positive economic impact of easing U.S.-China trade tensions.

On Monday, Chinese officials were said to be seeking flexibility on their pledges under the deal signed with the U.S. last month, as the Asian nation struggles to contain the virus that’s already spreading around the world.

“This is destroying the narrative of economic green shoots that we saw build up throughout November, December — the deal with the U.S. and China is basically dead,” said Ole Hansen, head of commodity strategy at Saxo Bank A/S. “There’s no way China can live up to the agreement of the phase-one deal. So growth is going to be delayed.”

Copper futures for March delivery fell 0.4% to settle at $2.507 a pound at 1:06 p.m. on the Comex in New York, after touching $2.4875, the lowest for a most-active contract in five months. The metal has dropped for 13 consecutive sessions, the longest slump in data going back to 1988.

Before traders in China returned from the Lunar New Year holiday on Monday, the sell-off in copper had been deepening amid fears that the virus outbreak will hurt global economic growth, denting demand for the metal used in everything from electronics to automobiles.

China’s importance to the copper market has grown considerably, with its share of global consumption expanding by about 30% since 2003, when the SARS epidemic broke out, according to Capital Economics analyst Kieran Clancy.

Capital Economics estimates the virus will shave about 500,000 tons from global demand, bigger than the 125,000-ton hit during during SARS epidemic.

Hopes for further recovery in global trade, stemming from strong Chinese December trade data and the signing of the deal between the U.S. and China, “have now been stopped in their tracks, and we anticipate global new orders and business expectations indices will drop sharply when next published,” said Colin Hamilton, analyst at BMO Capital Markets. Some Chinese buyers are expected not to honor contracts for commodities currently en route, according to Hamilton.