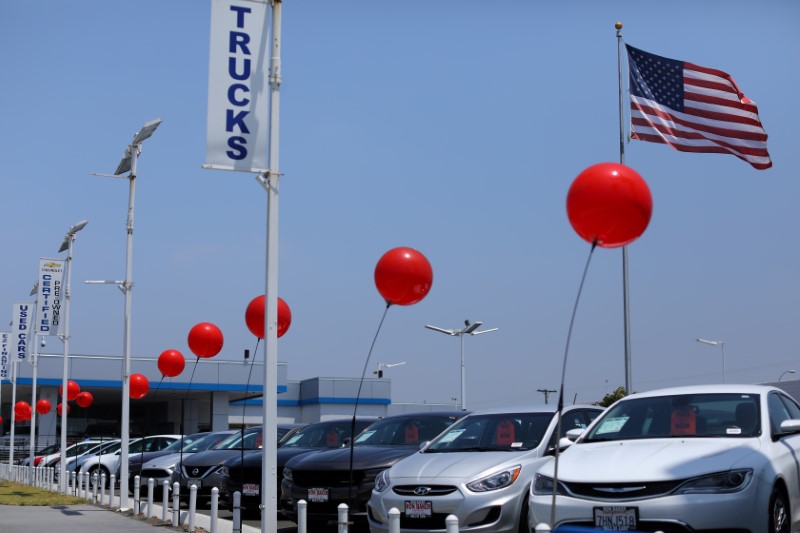 NEW YORK/DETROIT (Reuters) – Auto retailers have been slow to embrace e-commerce, but the coronavirus pandemic is changing that.

Online traffic has risen even as in-person showroom traffic has disappeared. Auto dealers are embracing digital tools to close deals without a handshake and arranging for vehicles to be picked up or delivered without requiring customers to come to their stores.

U.S. new vehicle sales will be hit hard by the pandemic. Demand dropped 13% in the first 19 days of March, according to research firm J.D. Power. In especially hard-hit markets like Seattle, San Francisco, Los Angeles and Chicago, where the virus has spread quickly, demand slumped as much as 22%.

Moody’s Analytics said on Friday the new and used vehicle markets could slump by as much as 20% from 2019 levels and stay depressed into 2021.

Based on a survey of some 40 dealers, analysts at Evercore ISI on Monday estimated the March U.S. seasonally adjusted annual selling rate could be 11 million to 12 million vehicles, on par with levels seen during the 2008/2009 financial crisis.

However, online traffic for the 1,000 U.S. and Canadian dealers served by Roadster, which provides a digital sales platform for everything from financing paperwork to vehicle delivery, was up about 6%.

“Many dealerships are going to get caught with their pants down,” said Brian Benstock, a dealer in the New York City borough of Queens. “This will be a watershed moment for the dealership industry.”

Dealers have been doing business online for years, but it has never been a major focus. Only 15% of all transactions are online, according to a November survey of 540 dealers commissioned by the National Automobile Dealers Association. However, they expect online car sales to double by 2025.

Benstock, who began moving most of his sales online in 2015, said companies like Tesla (NASDAQ:TSLA) Inc and retailer Carvana Co, which does all its business online, have begun to change consumer expectations.

Tesla has always relied on internet orders for its vehicles. It is implementing “touchless deliveries” in many locations, allowing consumers to unlock cars using the Tesla App, sign any relevant paperwork and return it to a drop-off location.

Carvana, which sells used vehicles, expanded the number of cars it sold to retail customers by 89% in 2019 from 2018.

Despite a sharp decline in its shares, Carvana has a market capitalization twice that of AutoNation Inc (NYSE:AN), the largest bricks and mortar U.S. retail vehicle chain. AutoNation started boosting investment in its online selling capability well before the virus shock.

David Smith, chief executive of dealership chain Sonic Automotive Inc, said most customers still want to visit a showroom to see the cars they are buying.

“There’s only a small percentage of the market who want to buy their car entirely online and have it delivered,” he said.

Cox Automotive analyst Michelle Krebs said the outbreak will accelerate the wider adoption of services that allow customers to stay away from showrooms.

“It’s what people wanted going into this,” she said, citing a Cox January survey that found consumers cited vehicle pick-up and delivery as their top desire.

Matthew Zappone, general manager of a Chrysler Jeep Dodge Ram dealer outside of Albany, New York, is encouraging his sales staff to use FaceTime to show customers the vehicle features they want to see without visiting the store.

“If you haven’t been doing it to this point, you’re under-prepared,” Zappone said.