Home
Market
Coronavirus fears spark surge in a volatility-focused ETN, but with a downside
Prev Article Next Article
This post was originally published on this sitehttps://i-invdn-com.akamaized.net/trkd-images/LYNXMPEG2M08X_L.jpg 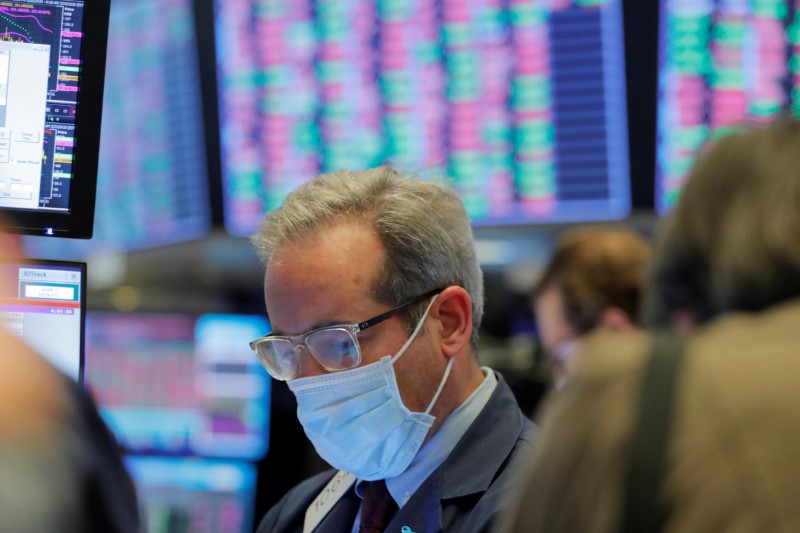 © Reuters. A trader wears a mask as he works on the floor of the New York Stock Exchange (NYSE) as the building prepares to close indefinitely due to the coronavirus disease (COVID-19) outbreak in New York

NEW YORK (Reuters) – A product that traders use to profit from surges in volatility has soared as coronavirus fears ravaged stocks, prompting concern about a plunge if the market’s wild swings subside.

The VelocityShares Daily 2x VIX Short-Term ETN (O:) started the year at just short of $49 a share and shot as high as $1,000 a share as markets plunged and volatility exploded. The exchange-traded product (ETP), issued by Credit Suisse (SIX:), last traded at $607.56.

TVIX trades like a stock and is tied to the movements of derivatives linked to the Cboe Volatility Index (), known as Wall Street’s “fear gauge” because it tends to rise when the market falls.

Traders looking to counterbalance stock declines have piled in, ballooning the fund’s assets to $6 billion from just over $700 million at the start of 2020 – a reflection of how expectations of volatility shot higher as coronavirus fears began roiling a placid stock market last month.

But with the VIX near its highest level since the financial crisis, an abrupt drop in volatility could be costly for investors, especially those purchasing the product near recent levels.

“If you haven’t ever implemented volatility instruments in your portfolio, it’s best to avoid them. It’s a land of wolves right now,” said Steven Place, founder of InvestingWithOptions in Destin, Florida.

The fund’s prospectus warns that a drop in its calculated value to or below 20% that of the prior day’s could trigger a liquidation of the note.

The drop in volatility needed to trigger that sort of move would have to be substantial – on par with the sudden decline that occurred after volatility shot higher in the October 1987 Black Monday stock market crash only to subside shortly after, said Vance Harwood, who runs the investment website Six Figure Investing and is a consultant focused on volatility-linked products.

While such a sudden drop may be unlikely, massive shifts in volatility have claimed other popular products linked to the VIX in recent years.

A Credit Suisse product for investors looking to benefit from continued low volatility met a spectacular demise in 2018, when a sharp market decline caused the VIX to spike. The fund, which was known as XIV, was one of the casualties in the “short-vol” trade investors had piled into to profit from stable markets.

Even a relatively moderate fall in volatility could lead to deep losses for TVIX investors that had bought near the highs. On Friday, the TVIX shares traded as high as $685 and as low as $440.

Meanwhile, a continued rise in volatility would force Credit Suisse or its affiliates to buy increasing amounts of derivatives to adjust the fund’s exposure to rising volatility. That could, in theory, exacerbate an upward move in the VIX if the purchases were far in excess of the fund’s trading volume, investors said.

“TVIX has become large enough where it can directly affect the market to the point where it can be a positive feedback loop,” Place said.

So far, that has not happened, said Harwood, whose analysis of the VIX futures market shows little evidence so far of any distortion in the VIX.