Home
Stocks
Coronavirus update: 195 repatriated U.S. citizens in federal quarantine, 213 people have died, and countries recommend against travel
Prev Article Next Article
This post was originally published on this site

The Centers for Disease Control and Prevention (CDC) said Friday that the 195 U.S. citizens who were repatriated from Wuhan, China, earlier this week have now been placed in federal quarantine over concerns about the coronavirus outbreak.

The coronavirus, which is new to humans, was first identified in December in Wuhan, China. The latest figures from China’s National Health Commission say that at least 213 people have died and about 9,700 have been sickened. The number of people who died rose by 43 overnight.

It is the first time that the CDC has issued a quarantine in 50 years, according to comments made by Nancy Messonnier, director of the Center for the National Center for Immunization and Respiratory Diseases. The patients are at March Air Reserve Base in Riverside County, California. Health officials said one individual tried to leave but remains on the base.

According to figures provided by WHO on Thursday, there are 98 confirmed cases in 18 countries, including eight person-to-person transmissions in Germany, Japan, Vietnam, and the U.S. The CDC said Friday that there are 241 people under investigation, 114 of which have tested negative for the coronavirus.

Several countries including Singapore and the U.S. are implementing stronger travel recommendations and border closures in light of the World Health Organization’s declaration of a public health emergency of international concern and a surge in coronavirus cases worldwide.

The State Department on Friday told Americans not to travel to China, in a Level 4 warning, which is its highest level. Singapore said that starting Feb. 1, no visitors who have traveled to mainland China within the last 14 days will be allowed to enter the country or travel through it. Mongolia and Russia have reportedly closed borders, and Pakistan banned all flights to and from mainland China.

“We worry that the market underappreciates the duration of this crisis in China,” Raymond James’ Chris Meekins, a former official for the Department of Health and Human Services, wrote in a Jan. 30 note. “We believe the travel advisories are likely to continue for the next few months.”

Some cash-hungry biotechs are tapping the crisis to raise money: At least a dozen small companies have disclosed plans to pursue development of vaccines, diagnostics and antiviral therapeutics that may be used to prevent or treat the coronavirus. At least half a dozen companies have announced plans to start coronavirust-related development over the last two weeks, including Co-Diagnostics Inc. CODX, +2.96%, Inovio Pharmaceuticals Inc. INO, -5.48%, NanoViricides Inc. NNVC, +44.17%, and Moderna. Inc. MRNA, -1.76% 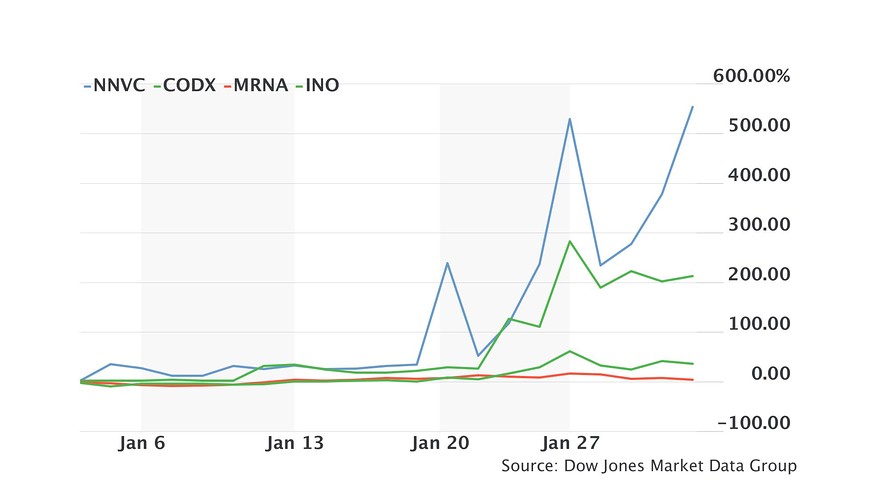 However, Brad Loncar, CEO of Loncar Investments, cautions against reading too much into these rallies. “Small companies are cash-hungry and struggling to survive,” he said, “and the sad reality is if you can get a pop in your stock price, you might be able to raise money.” Investors should look for two things: a record in following through on past development claims, and credible science as confirmed by government partners both in the U.S. and elsewhere. He cites Newlink Genetics Corp. NLNK, -1.23%  as an example. Newlink has worked with Merck Inc. MRK, -1.04% since 2014 on an Ebola vaccine, which wasn’t approved by the Food and Drug Administration until December 2019.

Airlines are under pressure: The American Airlines Group Inc. AAL, -3.23%  on Friday announced it was suspending flights to mainland China. The news came after American Airlines pilots on Thursday filed a lawsuit against the airline, seeking to halt flights between the U.S. and China, over concerns about the coronavirus outbreak. A number of airlines including British Airways PLC and Delta Air Lines Inc. DAL, -2.22%  have halted flights between the U.S. and China. Others including United Airlines Holdings Inc. UAL, -3.38%  have suspended some flights.

Corporations with exposure in China weigh impact on revenue, supply chain: The Coca-Cola Co. KO, -0.68%  CEO James Quincey told investors during a Jan. 30 earnings call that the outbreak of severe acute respiratory syndrome (SARS) in 2003 and 2004 was less of a concern than this coronavirus. The Chinese market makes up 10% of Coca-Cola’s global volume. “China’s economy was in a different place when SARS happened,” he said. “It’s worth noting that China’s economy is much bigger and this could become more connected to the rest of the world.” Levi Strauss & Co.’s LEVI, +0.99%  plans to push growth in China in 2020 were slowed in January by the outbreak, according to president and CEO Charles Victor Bergh. How the outbreak will impact global supply chains is also a concern for Honeywell International Inc. HON, -2.75%, Johnson Controls International PLC JCI, -2.37%, and ResMed Inc. RMD, -3.18%, according to FactSet transcripts of comments made by their executives during earnings calls. “There could be some supply chain disruptions,” Johnson Controls CEO George Oliver told investors.

Read more about the coronavirus outbreak:

CDC ‘not recommending’ Americans use face masks to prevent coronavirus