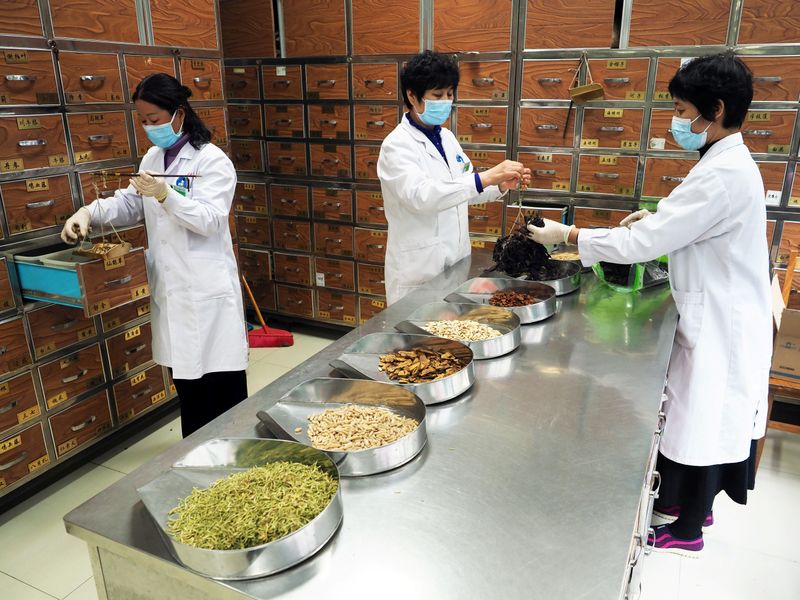 © Reuters. Medical workers prepare traditional Chinese medicine at a TCM hospital as the country is hit by an outbreak of the new coronavirus, in Binzhou

By Roxanne Liu and Gabriel CROSSLEY

BEIJING (Reuters) – The rapidly spreading virus in China and a shortage of medical resources are prompting people to resort to unorthodox ways to obtain treatment, with some appealing to HIV patients and unauthorized importers for medicine.

Chinese health authorities have said there is not yet any effective cure for the virus, which has killed more than 500 people in China. Although there is no evidence from clinical trials, China’s National Health Commision said the HIV drug lopinavir/ritonavir can be used for coronavirus patients, without specifying how they might help.

That triggered a rush, specifically for Kaletra, also known as Aluvia, which is drugmaker AbbVie’s off-patent version of lopinavir/ritonavir and the only version approved for sale in China.

It is usually used to treat and prevent HIV and AIDS, and AbbVie (NYSE:) said last month that China was testing it as a treatment for coronavirus symptoms.

Devy, a 38-year-old freelancer in Shandong province who did not want to give his family name for fear of retaliation, said he was among hundreds who contacted people with HIV to ask for medicine.

Although he had not recently traveled to Hubei province or Wuhan, the epicenter of outbreak, he grew worried that he had somehow caught the coronavirus after a doctor’s visit found symptoms of pneumonia. He also had other symptoms associated with coronavirus, such as fever and nausea.

Desperate and worried, he heard from a friend that a HIV-positive man nicknamed “Brother Squirrel” was offering Kaletra for free to people suspected to have the new coronavirus. He received about 30 pills.

“When you were left alone, seeing the blur shadow of death far away, I think no one can feel calm,” Devy told Reuters by telephone.

Even after he was finally tested negative for the virus, Devy still believed obtaining Kaletra was the right choice. “You can only try various things to save yourself, right?”

Brother Squirrel, whose real name is Andy Li, told Reuters he was a 30 years old and coined his nickname because he hoards drugs for his condition the way “squirrels like to hoard nuts”.

After hearing the Chinese health authorities’ comments on Kaletra, he and a few other HIV patients pooled about 5,400 Kaletra tablets in less than a week. They then posted their offer on China’s Twitter-like platform Weibo.

“We felt like we were organized for a military mission,” Li said, recalling that hundreds of messages soon flooded in, leaving him barely any time to sleep or eat in the first three days until all of the pills were mailed.

“There are so many people in need of the drug, and I don’t want to waste time,” Li told Reuters. “Time is life.”

Chinese health authorities cautioned that lopinavir/ritonavir, a prescription drug, has potential side effects such as diarrhea, nausea, vomiting and liver damage.

The rush has also opened up moneymaking opportunities.

More than 28,000 people have been confirmed to be infected in China, most in Wuhan and Hubei. But a shortage of test kits has led to suspicions that many more are undiagnosed.

Gatsby Fang, a Chinese cross-border buying agent, told Reuters that he ordered generic versions of Kaletra from India on Jan. 23, shortly after he firstly heard that the drug might be useful against the new coronavirus.

His buyers included infected patients, front-line doctors in Hubei, and those who did not need the drug but thought it might offer protection. Other drug sellers also approached him, pretending to be patients, Fang said.

Gray market prices for the drugs in India, where he sourced them, started to rise on Jan. 25, Fang told Reuters.

“Basically the patients reaching out to me were those who have no place for treatment, no place where they can confirm 100% if they have or not have the virus,” Fang said. “That’s the core of the problem.”

The World Health Organization has warned that there are “no known effective” treatments for the coronavirus, knocking down unconfirmed reports of a research breakthrough in China.

Some traditional Chinese medicine treatments have also seen a boost in demand.

There is no evidence that such treatments help in fighting the coronavirus, Gauden Galea, the WHO’s representative in China, told Reuters on Saturday.