Home
Stocks
Dispatches from a Pandemic: In the emergency room, scarcity of protective equipment ‘has been the biggest issue,’ says ER doctor
Prev Article Next Article
This post was originally published on this site

My brother-in-law, John Velasquez, is an ER doctor on the front lines of the response to COVID-19. He just finished a series of night shifts at Lawnwood Regional Medical Center in Florida and is heading north for a week working at St. Luke’s University Health Network in New Jersey. I checked in with him at the end of one of his shifts.

MarketWatch: How busy was it today?

John Velasquez: Initially, volume was up, and everyone was coming to check if they had COVID, even without symptoms. When more and more people realized we had limited tests and could only test high-risk patients, less people started coming. In the past few days, volume in general has been less busy, especially at night due to the statewide curfews, which has helped tremendously, in my opinion.

MarketWatch: How was the health of the patients?

Velasquez: For the most part, patients that need to be in the emergency department are being seen (like heart attacks, strokes, trauma, etc.), and the nonemergent [patients] are staying away. People are starting to realize that if they come they might actually contract COVID, and they may not get the test unless they meet strict criteria, like fever or respiratory distress. The COVID testing has been an issue in itself. After WHO declared a COVID pandemic, most hospitals were undertesting, and, when testing became more widespread, results have been backlogged for over a week.

‘Intubation is the highest-risk procedure in terms of catching this disease as patients can cough directly into your face while you are trying to insert a tube down their trachea.’

MW: How are you and your colleagues holding up?

Velasquez: PPE [or personal protection equipment] has been the biggest issue. I don’t know if you have heard about the hoarding going on here with everything from toilet paper [to] guns [and] ammo, but it seems that even masks for PPE have been hoarded and stolen from the hospitals. I have spoken to friends in different states who work in numerous other hospitals, and they are all going through the same issues.

There are many reports that people with COVID can be asymptomatic, and the most frustrating part is that lack of PPE.

In the ER, we often intubate patients in respiratory distress and place them on ventilators. Intubation is the highest-risk procedure in terms of catching this disease as patients can cough directly into your face while you are trying to insert a tube down their trachea.

MW: What is the mental state of staff and patients?

Velasquez: For the most part, I come in to work, do my job and don’t complain. The staff goes on like business as usual. That’s how the culture is in the ER, though. One minute, we are coding someone with a GSW [gunshot wound], and the next minute I can be sedating a kid to reduce a dislocated joint, or something as minor as informing a patient that they have a sprained ankle.

‘I come in to work, do my job and don’t complain. The staff goes on like business as usual. That’s how the culture is in the ER.’

There’s a growing concern about the lack of PPE from everyone in the department, especially as people are becoming critically ill. Two ER docs are in critical condition (one in his 40s).

MW: Are you guys worried?

Velasquez: I think I speak for my colleagues as well when I say that, in general, we aren’t too worried — even though we should be — about working on the front lines. We all took the Hippocratic oath, and we try to be ready for whatever comes through those doors. The only thing we ask for is to have some form of protection. In regards to the PPE shortage, the CDC actually said to use scarves and bandanas if we are out of masks. This is truly absurd, if you ask me.

Not only are we risking our lives, but we are endangering our loved ones. I fly up to see my daughters in [New Jersey] every month and visit my mother, who just turned 83. Because I don’t know if I am an asymptomatic carrier, I will only plan to see them at a distance. 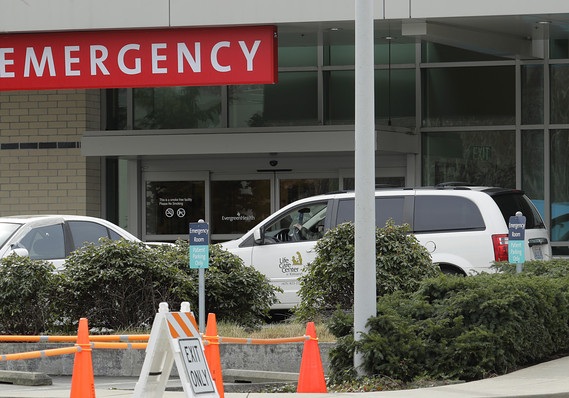 A vehicle from the hard-hit Life Care Center at Kirkland, Wash., outside the EvergreenHealth Medical Center last week.

My wife, as you know, is an ER doc as well, so if one of us gets it, we’re pretty much screwed. At least we won’t have to practice social distancing with each other.

MW: Are there any other shortages?

Velasquez: There are staffing shortages throughout the country especially in the New York metro area. This is mainly due to the volume of patients and health-care workers being quarantined for 14 days if they treated a patient that tested positive for COVID. I’ve heard that they have granted docs in with licenses from other states, and they’re also asking retired doctors to help out.

‘The CDC actually said to use scarves and bandanas if we are out of masks. This is truly absurd, if you ask me.’

MW: Are there any signs of things getting better?

Velasquez: I feel like, as a country, we are a few weeks, maybe months, out from things going back to normal, if we are taking what happened in China and Europe as an example. I know, from speaking with ER docs in N.Y., that they seem to be getting hit pretty hard compared to [Florida]. They are running low on ventilators and have a lot of critical patients. This might be true with many metropolitan areas.

MW: What else stood out today?

Velasquez: My last set of shifts, I can’t recall. … I try to have short-term memory, and it helps me keep my sanity after a busy day in the ER.

Duncan Mavin is a London-based editor for MarketWatch and the Barron’s Group.