Home
Stocks
Earnings Outlook: McDonald’s earnings preview: Chick-fil-A is the fast-food giant’s biggest competition in the U.S.
Prev Article Next Article
This post was originally published on this site

“They lack a truly high-quality chicken sandwich to compete with Chick-fil-A, which is McDonald’s most important competitive threat in the U.S.,” said Mark Kalinowski, chief executive of the research firm

McDonald’s is scheduled to announced fourth-quarter earnings on Wednesday before the opening bell.

Kalinowski Equity Research polled McDonald’s franchisees for a two-part January report, with the second section focused on the question of which competitor McDonald’s is losing market share to. Nearly nine out of 10 (89%) said Chick-fil-A.

“This opportunity is tremendous,” said one franchisee. “We have to get a sandwich that matches our competitors’ taste and quality.”

Another said McDonald’s should simply take a winning recipe from the competition.

“The opportunity is huge,” said this franchisee. “We should shamelessly copy Popeyes’ excellent sandwich.”

Another expressed doubt that McDonald’s can keep up.

“The real question is, can we compete with Chick-fil-A? I don’t think so,” said one franchisee. 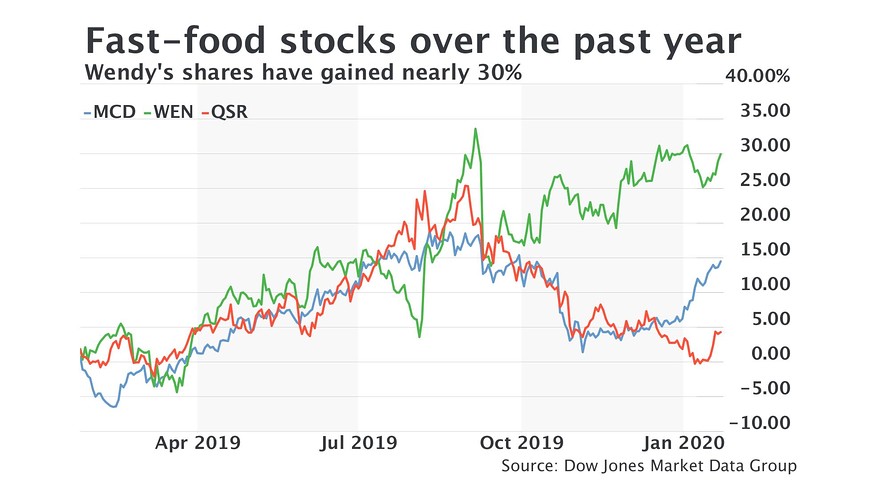 Chick-fil-A was the third biggest U.S. restaurant concept at the end of 2019, according to domestic systemwide sales, Kalinowski said in its report.

“With a lot of whitespace in the Midwest and Northeast, Chick-fil-A’s unit expansion is likely to remain robust for years to come,” the report says.

As for Popeyes, that chain was only the 25th largest at the end of 2018, and even if it were to grow by half, the market share gain would be 0.9%, according to Kalinowski.

“So although Popeyes is to be applauded for its massive chicken sandwich success, that success – in context – suggests minimal/immaterial competitive impact on McDonald’s,” the report said.

For franchisees, the issue is simple.

“The opportunity is tremendous,” said one franchisee. “We have to get a sandwich that matches our competitors’ taste and quality.”

Kalinowski upgraded McDonald’s to buy from neutral on Wednesday, with a $240 price target. McDonald’s has an average overweight stock rating and average target price of $225.62, according to 33 analysts polled by FactSet.

One issue is the slow speed at which McDonald’s adds items or changes its menu. Both Kalinowski and Adam Werner, co-leader of the restaurant, hospitality and leisure practice at AlixPartners, call McDonald’s a “fast follower” rather than a leader in fast-food menu innovation.

Kalinowski supports a more conservative approach, in light of past missteps like the Fish McBites. Instead, McDonald’s has focused on improvements to its core items, like making the popular Quarter Pounder with fresh beef.

But Werner, like franchisees, doesn’t think the chicken sandwich wars are going to end anytime soon, so McDonald’s will need to do something to participate.

“McDonald’s competitors are forcing change and forcing McDonald’s to keep up,” he said.

The same could be said in the area of plant-based meal options, with McDonald’s testing a Beyond Meat Inc. BYND, -3.77%   sandwich in Canada even after Burger King dove into the trend with the Impossible Whopper.

“It feels like they’re slower than they have been in the past for other types of launches,” Werner said about the P.L.T – plant, lettuce, tomato – test.

See: Beyond Meat, Tyson’s Raised & Rooted and other plant-based foods are officially mainstream

“Because of its size and position, the chain is very deliberate with menu launches—regarding the plant-based movement, the chain clearly is taking the time to see how profitable the trend would be and how much of the trend is just consumers saying they want it versus whether they’re actually ordering it,” said Lizzy Freier, managing editor at Technomic, a data and analytics provider for the food-service industry.

As for the rest of the menu, Freier thinks McDonald’s can win with “slight tweaks” like price bundles, or the addition of All-Day breakfast.

“McDonald’s is very much known for consistency and many go to the chain for the standard fare,” she said.

“Most recently, McDonald’s introduced a Bacon BBQ Burger in early December and around the same time began testing a new chicken sandwich in Houston, Tex. And Knoxville, Tenn.,” analysts said.

Here are other things to watch out for in McDonald’s earnings:

Earnings: FactSet is guiding for earnings per share of $1.96 down a penny from 2019.

Estimize, which crowd sources estimates from sell-side and buy-side analysts, hedge-fund managers, executives, academics and others, expects per-share earnings of $1.98.

McDonald’s missed the FactSet sales forecast in the last quarter.

Stock price: McDonald’s shares have rallied 15% over the last year while the Dow Jones Industrial Average DJIA, +0.79%   has gained 17.4% for the period.

-McDonald’s will get more predictable, according to Stifel analysts, who say the company has “essentially completed a business model transformation” and now has sales momentum both in the U.S. and abroad.

McDonald’s has been focused on adding digital and service components to its restaurants. Still, analysts aren’t ready to declare the shift a success.

“All else being equal, we would consider becoming more constructive of McDonald’s shares at a better entry point as we believe progress is being made to increase guest counts,” the note said.

-Oppenheimer analysts are also in wait-and-see mode. Though they don’t think that the company’s new chief executive, Chris Kempczinski, is going to make any dramatic changes from the current strategy, investors are looking for traffic and earnings improvement. Analysts have doubts about whether that’s going to happen and maintained their perform stock rating.

“McDonald’s plans to leverage its digital ‘growth accelerator’ to drive same-store sales in the U.S. in 2020 after relying more on its delivery and ‘Experience of the Future’ initiatives in 2019,” analysts said.

“Experience of the Future” efforts include self-ordering kiosks. The company has also improved its mobile-order-and-pay capabilities.

“In 2018, McDonald’s acquired Dynamic Yield to better upsell consumers and manage kitchen throughput, but the technology is not yet customized to the individual, which may begin to change in 2020,” SunTrust said.