Home
Stocks
Economic Preview: Coronavirus spreads damage to Wall Street. Could the U.S. economy be next?
Prev Article Next Article
This post was originally published on this site 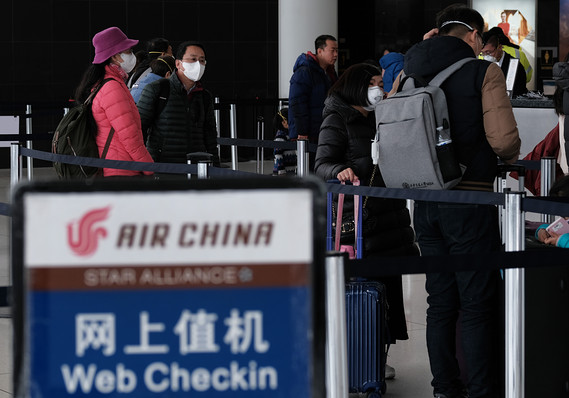 People wear medical masks at John F. Kennedy Airport out of concern over the coronavirus. Travel restrictions on flights and other complications from the virus could harm economic growth in 2020.

The coronavirus epidemic in China seemed like a distant threat to the U.S. economy a week ago, but that was before the carnage in the stock market. Fear itself, as is often the case on Wall Street, is also contagious.

After a 600-point decline in the Dow Jones Industrial Average DJIA, -2.09%  on Friday, it’s quite clear the spread of the virus poses a risk to economic growth in 2020, at least in China and other parts of the world.

Already, the World Health Agency declared an international emergency, airlines have suspended flights to China, some U.S.-based businesses have temporarily shut down their Chinese operations and the Federal Reserve said it’s monitoring the situation closely.

The Chinese government itself quarantined tens of millions of people, closed many public venues, extended a long New Year holiday, and encouraged people to stay or work from home if possible.

Although the U.S. economy appears well insulated — barring a worldwide pandemic — the coronavirus is sure to have some kind of impact. After all, China has the world’s second largest economy, it accounts for one-fifth of global gross domestic product and it’s one of the largest trading partners of the United States.

The noxious effect of the virus, for one thing, could easily offset any benefits from an interim deal the U.S. and China signed earlier this month to ease a costly dustup over free trade.

It could even worsen the international trade situation if goods — and people — can’t get in our out. Thousands of Chinese travelers are a big boon for the American tourism industry, for instance.

Some forecasting firms are already penciling in a sizable reduction in economic growth in the first quarter. Goldman Sachs estimates the crisis could cut as much as 0.5 percentage points off U.S. gross domestic product.

Just a week ago, most forecasters were predicting little or no impact.

The next week “is going to be another big week for scary headlines,” economists at Jefferies LLC told clients.

Even with the coronavirus dominating the headlines, Wall Street is still going to pay close attention to the first big batch of reports on how the economy performed in the first month of the new year.

In any other week, the U.S. employment report for January would be the star headliner. Economists polled by MarketWatch forecast the economy added 162,000 new jobs last month. The unemployment rate is likely to remain at a 50-year low of 3.5%.

The pace of hiring has slowed in the U.S. and wage growth appears to have flatlined, but as the low jobless rate shows, the labor market is still very robust and strong enough to support an economy that’s expanded for a record 10 and a half years. The jobs report is published Friday.

Read: Uh-oh: Wages and benefits for American workers have leveled off

Earlier in the week, Wall Street will also pay close attention to the ISM survey of American manufacturers to see if growth showed any improvement in January. The index fell below the key 50% level five months ago into contractionary territory.

Even if the index jumps above 50 again, a sustained rebound would seem unlikely until the coronavirus fades. China is by far the biggest center of production in manufacturing in the world and a big blow to its economy would damage the broader global economy as well.

“The deep slowdown in China, even if only temporary, and spreading concerns about the virus look to chill growth more broadly,” said chief economist Douglas Porter of BMO Capital Markets.

How much is the million dollar question, but it may be awhile before we get an answer.