Home
Stocks
Economic Report: 23 million American jobs in immediate danger from the coronavirus crisis
Prev Article Next Article
This post was originally published on this site 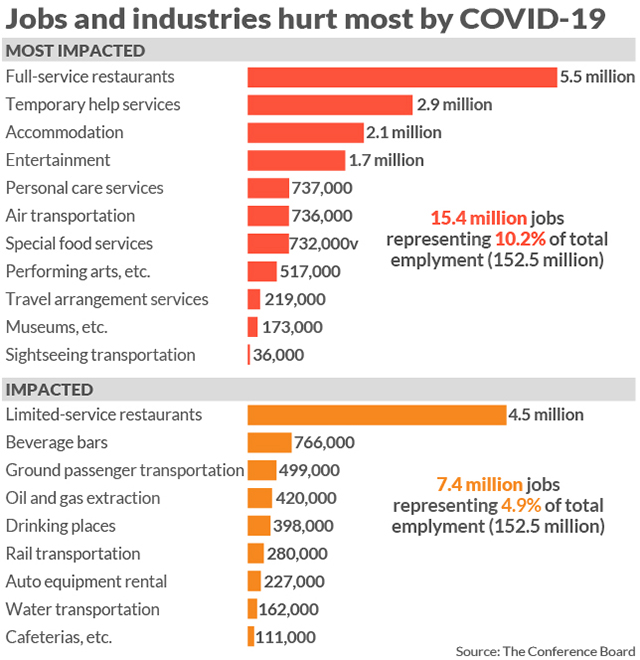 Some 23 million jobs may be in immediate danger from the massive disruptions to the U.S. economy from the coronavirus epidemic.

Americans who work in retail, airlines, travel agencies, restaurants, hotels and entertainment are the most vulnerable, according to a new study by the Conference Board, a private research firm. Those industries employ some 12 million people.

Since the coronavirus has spread, many companies have closed, resorted to skeleton crews or shortened hours. Some states such as New York and California have also required all nonessential businesses to shut down.

Read: Here’s how to track the mounting damage to the U.S. economy from the coronavirus

Not all of the workers in these industries will lose their jobs, temporarily or even permanently. In some cases, companies are actually hiring to meet an increase in demand.

Huge retailers Amazon AMZN, -1.85%  and Walmart WMT, -4.59%, for instance, have been inundated with orders with millions of Americans staying at home. Both said they are looking to add more than 100,000 new employees to handle the flood of new business. And some takeout restaurants and fast-food chains might benefit as well.

Yet millions of workers face furloughs, layoffs or a sharp reduction in hours. In just the past week, up to 3 million people may have lost their jobs, according to Wall Street estimates.

By contrast, an average of around 220,000 a week were losing their jobs, but quickly finding new ones, before the crisis. Weekly jobless claims will be reported next Thursday.

The longer the disruption lasts, the bigger the butcher’s bill for workers.

Read: A recession is likely, say economists and even President Trump. What does it mean?

And: Echoes of the Great Depression? U.S. economy could post biggest contraction ever

Gad Levanon, chief economist for North America at The Conference Board, said “one quarter to one half” of the 23 million at-risk jobs could be eliminated if the crisis goes on for two or three months.

The saving grace, if it can be called that? The economy could recover relatively quickly if the crisis begins to recede by midsummer.

“Six months from now many of those jobs could come back,” said Levanon, though he noted that “there will be industries in which we will see a slower comeback.”