Home
Stocks
Economic Report: Economy grows 2.1% in the fourth quarter as GDP gets boost from sinking trade deficit
Prev Article Next Article
This post was originally published on this site 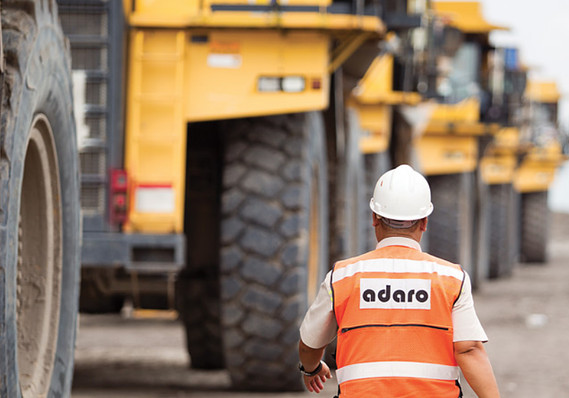 The U.S. economy tapered off toward the end of 2019, but a record expansion is still alive and well.

The numbers: The U.S. economy grew slightly faster than 2% in the final three months of 2019, aided by a temporary plunge in imports and a resurgent housing market. The modest rate of growth likely foreshadows what lies ahead.

Gross domestic product, the official scorecard for the economy, expanded at a 2.1% clip in the fourth quarter. Analysts polled by MarketWatch had forecast a 1.9% increase. 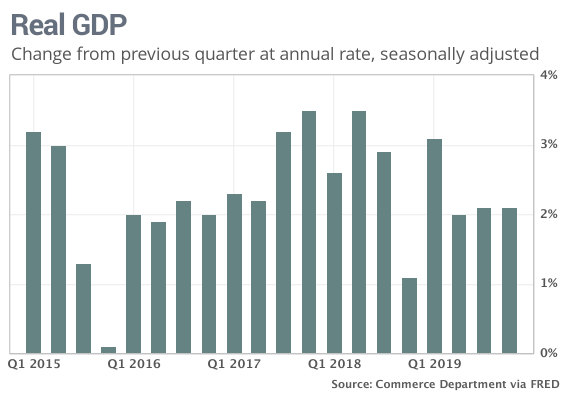 The U.S. got off to sizzling start last year as GDP reached 3.1% in the first quarter, but growth tapered off to the postrecession average of around 2% after the trade war with China intensified and business investment slumped.

The government’s snapshot of the economy toward the end of last year offers a glimpse of what’s in store for 2020. Consumer spending has fueled a record expansion now in its 11th year even as businesses have cut back on investment and production. Those trends are likely to persist.

What happened: Consumer spending, the lifeblood of the economy, rose at a 1.8% pace in the fourth quarter. While that’s a big dropoff from gains of 3.2% and 4.6% in the spring and summer, it’s still more than enough to keep the economy on a stable path of growth.

Households have spent generously over the past year as unemployment fell to a 50-year low of 3.5%. Wages are rising at a healthy 3% rate and layoffs are at the lowest level in decades.

The steady pulse of consumer spending, meanwhile, has led to higher sales for businesses and allowed them to maintain current staffing even as the economy has slowed.

Read: Take away the military and durable-goods orders sink 2.5% at the end of 2019

The economy got an even bigger boost — though likely a short-lived one — from a sharp decline in the U.S. trade deficit. Exports climbed 1.4% while imports sank 8.7% in the fourth quarter. That’s the biggest decline since the end of the 2007-09 2007-09 recession.

The drop in imports stemmed mostly from an increase in U.S. tariffs on Chinese goods last September. Companies rushed to beat the tariff increases, then cut back on import orders to wait to see if the Trump administration rolled back the punitive measures.

An interim deal with China that’s eased trade tensions rolled back some of the tariffs and economists expect imports to snap back in the first quarter. The first sign of a rebound came in December.

On the other side of the ledger, weak business investment held the economy back again.

Investment in equipment declined almost 3% and spending on structures like oil rigs tumbled 10% in the fourth quarter. Trade tensions and Boeing’s ongoing troubles with its grounded 737 Max plane have exacerbated the slowdown in investment.

The level of inventories was another drag. The change in the value of unsold goods rose just $6.5 billion vs. a $69.4 billion increase in the prior quarter, lopping about 1.1 percentage points off final GDP.

Inventory growth sank in large part due to a strike at General Motors in the fall that crimped auto production. Inventories are likely to rebound in the first quarter.

The one bright spot in the commercial segment of the economy has been housing. Builders stepped up investment after the Federal Reserve cut interest rates and demand for housing rose. Housing outlays rose 5.8% in the fourth quarter.

Government spending, meanwhile, increased 2.7% in the fourth quarter, largely reflecting an increase in outlays on ships, planes, missile systems and other military hardware.

Inflation, as measured by the Fed’s preferred PCE price index, was little changed at a 1.6% rate.

Big picture: The economy is growing fast enough to ward off the threat of recession, but there’s no explosion in growth coming.

The so-called Phase One trade deal with China has put the dispute between the world’s two largest economies on the back burner, but ongoing tensions are likely to keep businesses in the sidelines. The new threat from the coronavirus and 2020 U.S. presidential elections are also giving business leaders angst.

Also: The Fed is keeping a close eye on the ‘serious’ coronavirus

What they are saying? “The 2.1% headline GDP print gives the optical illusion of an economy chugging along at a moderate 2% clip at the end of 2019, but the composition of growth reveals a softer picture,” economists at Oxford Economics told clients in a note.

“The bottom line is that the economy appears to have successfully sidestepped a more pronounced slowdown that sent ripples of fear through the market last year,” said Jim Baird, chief investment officer at Plante Moran Financial Advisors. “Certainly, the economy isn’t firing on all cylinders, but it also doesn’t appear to be at risk of stalling out either.”

Market reaction:The Dow Jones Industrial Average DJIA, -0.47% and S&P 500 SPX, -0.63% declined in Thursday trades. Stocks had been trading at records until an outbreak of the deadly coronavirus in China put financial markets on edge.

The 10-year Treasury yield TMUBMUSD10Y, -1.79% slipped to 1.57% as investors sought the perceived safety of government bonds.