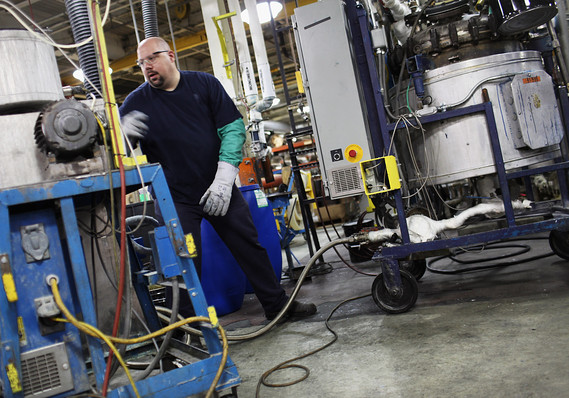 A casting operator on the factory floor at Quadrant, a high end plastic processor on October 19, 2011 in Reading, Pa.

The numbers: The Philadelphia Fed said Thursday its gauge of business activity in its region surged in January. The regional Fed bank’s index rose to 17 in January from 2.4 in the prior month.

What happened: The headline index is based on a single stand along question about business conditions unlike the national ISM manufacturing index which is a composite based on components. This month, the subcomponents also moved up in line with the headline.

The barometer on new orders increased 7 points to 18.2 in January. Shipments rose 8 points to 23.4. The measure on six-month business outlook edged up 4 points to 38.4.

Big picture: Investors look at the Philly Fed index and a separate Empire State index for the New York region to get a sense of the ISM index, which has been contracting for five straight months. The two regional Fed indicators have been stronger as the ISM in recent months. Some economists think the relative strength shows the East Coast is less reliant on trade with China. In December, the ISM factory index slipped to 47.2, the weakest reading since the recession. The January reading will come early next month.