Home
Stocks
Economic Report: Share of union workers in the U.S. falls to a record low in 2019
Prev Article Next Article
This post was originally published on this site 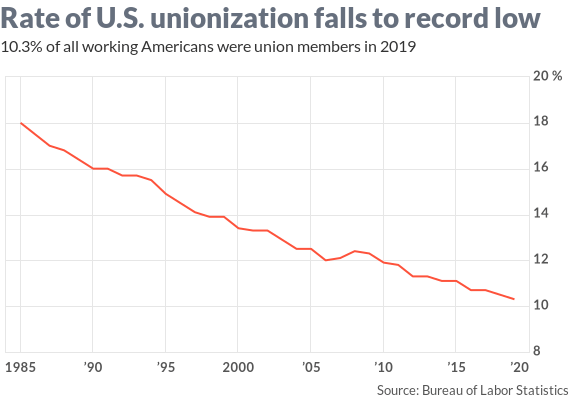 The percentage of American workers in unions fell to a record low in 2019, extending a long slide that began decades ago and shows little sign of abating.

The number of unionized workers slipped to 14.57 million last year from 14.74 in 2018, the Bureau of Labor Statistics said Wednesday in an annual report.

As a result, the share of workers belonging to unions dropped to a new post-World War Two low of 10.3% from 10.5%.

The falling rate of membership reflects both an outright decline in union workers and an expanding number of people in the labor force.

Union membership has been declining for decades. The share of the unionized workers peaked at just slightly over 25% in 1953. It remained above 20% until 1980 before beginning a long slide.

Nearly half of all union workers — 7.1 million — work in government. The bulk of them work in education and public safety jobs such as firefighting and law enforcement.

Some 7.5 million private-sector workers were members of unions, mostly in manufacturing, utilities, transportation and telecommunications. 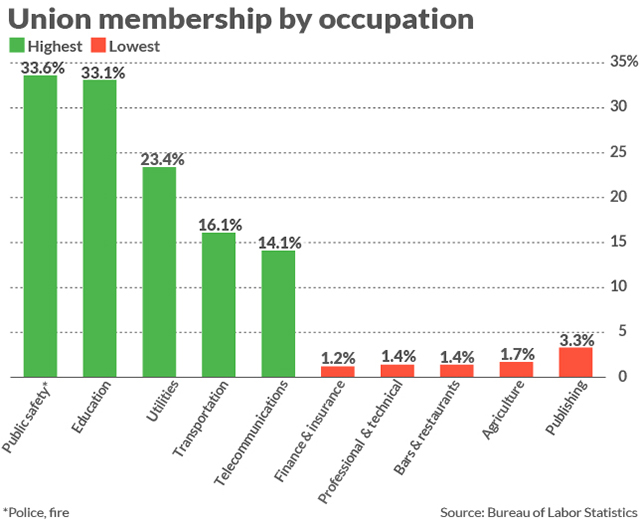 One-third of all government workers belong to unions, but the share of private-sector workers in unions was just 6.2%.

In a bit of twist, though, public-union membership is no longer growing rapidly while the share of private-sector workers has climbed almost 1.8 million since 2010.

Read: The U.S. economy still isn’t firing on all cylinders. Here’s what needs to change

Some states such as Wisconsin have made it easier for government workers to opt out of unions. At the same time, a modest rebound in manufacturing since the end of the 2007-2009 recession has boost employment in heavily unionized sectors such as auto making.

Unions are strongest in the Midwest, Northeast and Pacific Northwest. They are weakest in the South and Southwest.

Hawaii has the largest percentage of union workers at 23.5%. The Carolinas were the lowest at just over 2%. 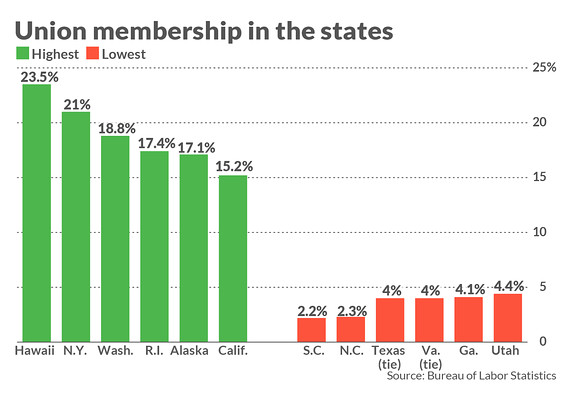 The rate of union membership for men fell slightly to 10.8% while it dipped to 9.7% for women.

By race, 11.2% of black workers were members of unions, 10.3% of whites, 8.9% of Hispanic-Americans and 8.8% of Asian-Americans. Membership fell for all groups except Asian-Americans. 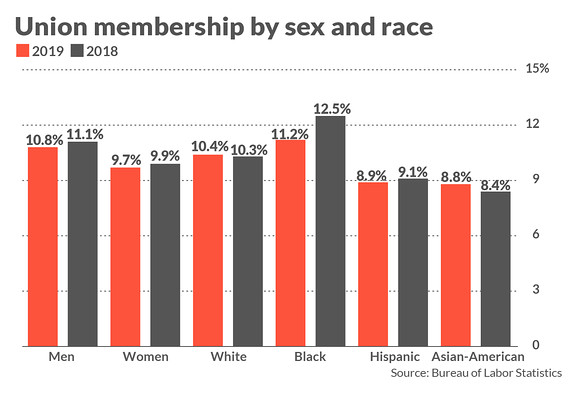