Home
Stocks
Economic Report: These states had the lowest unemployment rates in 2019. What about swing states?
Prev Article Next Article
This post was originally published on this site

The unemployment rate rose in 2019 in a few key states critical to President Trump’s re-election this year, but joblessness fell in most of the country as the U.S. finished the year with the lowest level of layoffs in 50 years.

More than half of the 50 states and the District of Columbia reported declines in unemployment in 2019 and 13 states ended 2019 with jobless rates below 3%, led by South Carolina, Utah and Vermont .

Only 13 states saw unemployment rise, with the biggest increase in Mississippi. The state’s jobless rate jumped 1% to 5.7%, reflecting in part less employment in energy and trade. That’s well above the national average of 3.5%. 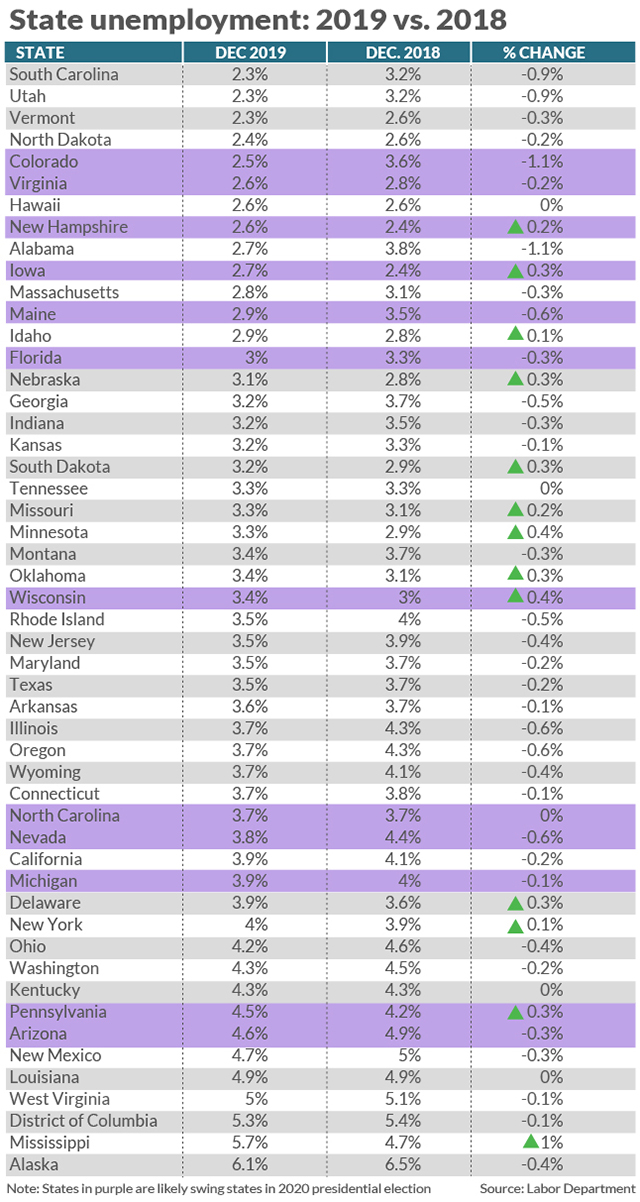 The lowest rates were in South Carolina, Utah and Vermont, where unemployment was just 2.3%.

The jobless rate fell the most in Alabama and Colorado, the U.S. Labor Department said Friday. Both states reported a decline of 1.1 points in 2019.

President Trump plans to run for re-election this year on the strength of the U.S. economy, highlighted by ultra-low unemployment.

But notably, the jobless rate rose in two states that were vital to Trump’s 2016 victory.

The unemployment rate also rose slightly — but remained very low — in the battleground states of Iowa and New Hampshire.

Yet the jobless rate fell in Maine, Nevada, Ohio, Arizona, Florida and Virginia — all states that could be pivotal to the 2020 election.